Take the NFTs to the bank? For thousands on Axie Infinity, it’s more than just a game

Last month, Axie Infinity became the world’s valuable NFT collection on the planet. An out-of-this-world success primarily driven by a simple factor: players can earn money while playing. Is the business poised to stick around for the long haul or a flash-in-the-pan house of cards set to come tumbling down?

The core struggle has parallels with Pikachu’s never-ending scrap with a wild Pidgey. Instead of Pokémon, we’re battling hordes of small round monsters called “Axies.” And instead of being locked in on Gameboy, the game is played on desktop or, of course, your mobile. Axie Infinity is a turn-based online card game—and the blockchain game du jour. More than a million users log onto the platform to play daily, where they purchase land and gear, feed, breed and drill their “Axies,” who they can either then send into battle versus others or sell—for actual crypto cash.

Axie Infinity is a new way of using Ethereum blockchain technology for purposes of fun, namely by combining it with a play-to-earn model. Each monster and every piece of gear is a non-fungible token (Check out our recent NFT explainer if you are in the dark on NFTs), meaning ownership can be easily verified. And to the victors of Axie skirmishes go the spoils, in this case coins of cryptocurrency Small Love Potions (SLP).

In addition to campaigns of aggression, users can be factories of war of a sort and breed, feed and drill their own Axies, thus raising an army—or an inventory. To do this, players must pay a combination of SLP and Axie Infinity Shards (AXS), the game’s second crypto-currency, which is capped at 270 million units. Where SLPs fulfill a similar function to “experience points” and are necessary to progress in the game, AXSs are a so-called governance token. Those who have them in their possession can make an active contribution to the game’s future lay out.

We have a million-dollar Axie

The goal of the game is to have the most-valuable collection of Axies. The value is determined by the current Ether price, which can be tracked using platforms such as Binance. Ether can then be converted into a Fiat currency, i.e. USD, EUR or Philippine pesos. And there is potential, and precedence, that it can be a lucrative endeavor indeed. While 1SLP is currently only worth 9 Euro cents , 1 AXS coin is worth EUR 75. For every battle won, players receive several SLPs. There are also a slew of bonuses, for example, when they have taken part in a certain number of battles. Additionally, players can make money every time they sell one of their Axies. Each Axie consists of six body parts and can be used for breeding purposes up to 7 times. The rarer the combination, the more valuable the Axie.

The highest-grossing Axie was sold for EUR 950,000. Recently, the game made waves, after people in Vietnam and the Philippines began playing the game as a means to make money after COVID had stripped many of any means to make money. Now game not only providing people with a steady income, but it’s also turning people hit hard by the pandemic into NFT traders and possibly driving NFT adoption at scale. With players in SE Asia earning up to USD 1000 per month—by no means a trifling sum when considering that the average monthly income in the Philippines is EUR 117—and Youtubers in the West calculating that an average player can earn USD 6 per hour, there is a path towards solid income.

But before you can start earning money with the game, players first need to pony up themselves. To begin, each player needs a minimum of three monsters. Thecheapest of which currently cost about USD 200 bucks; for a while newbies needed to pay about USD 1000 for a trio. To finance he start-up costssome Filipino or Vietnamese players acquired AXS tokens in Facebook groups from other players, whom they then paid up to 30% in interest. 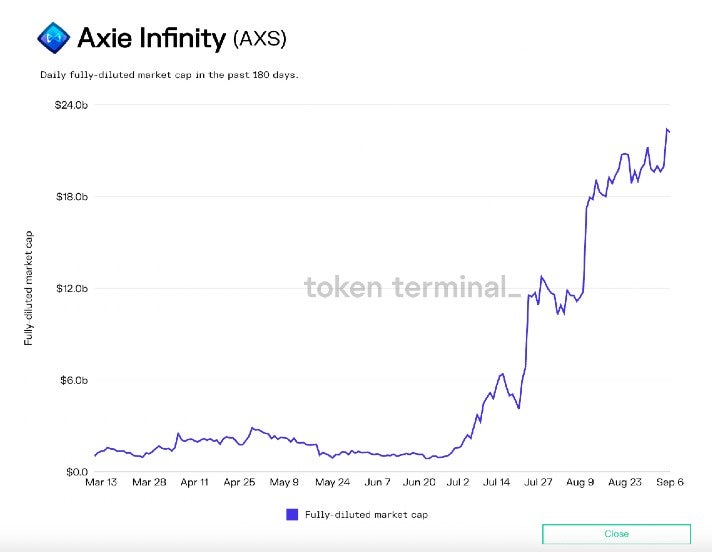 The Axie market cap grew to USD 22B in three months. Source: Tokenterminal.com

Roughly 40 percent of all players reside in the Philippines, and thousands of them have begun playing Axie full time. And the trend is showing no signs of slowing. In April, there were 30,000 DAUs (daily active users) globally. By August that number had soared to a million. Furthermore, within the past quarter, the value of an AXS coin has increased by 250-fold and the total value of all NFTs traded on the marketplace has eclipsed USD 1B. Over that same period, the market cap skyrocketed to USD 22B, making Axie Infinity the most valuable collection of NFTs on the planet—and doing so in record time.

But not everyone is convinced of the game’s long-term bonafides. Critics include non-profit organization Coinmonks, who see all the hallmarks of a ponzi scheme. Players pay cash of their own in the hope of making profit themselves. According to Coinmonks, “this works, because the number of new players joining in each month is larger than the number of current players,” meaning the value of SLP is holding steady. Conversely, if the number of new users drops below the number of current players, then that will impact the value of SLPs, driving it down. Other experts, too, are warning of hyper-inflation. Although the game’s operators have incorporated mechanisms to prevent that from happening, including the previously mentioned limit of times players may breed a single Axie or capping the total number of AXS coins at 270 million, the efficacy of these measures will not be known until one of the aforementioned worst case scenarios happens.

It also must be said that some players, but not all, can make a living playing the game. If you believe Coinmonk’s calcuations, a full-time salary is only feasible for 1 out of ever 700 players. For the other 699 players, we wouldn’t be talking about a play-to-earn business model, but a pay-to-play one—and we’d be talking about a lost 1000-dollar investment.

The criticism has not kept high-profile investors, such as Mark Cuban or Reddit co-founder Alexis Ohanian from investing in Sky Mavis, the Vietnamese company behind Axie infinity. In May, Sky Mavis announced a USD 7.5M dollar round of Series A funding, in which both Cuban and Ohanian invested. Even Packy McCormick, a US analyst known for his sharp break down of the VC scene, sees more than an absurdly fast-growing game, whose bubble ready to burst. In his Not Boring newsletter he wrote that: ” What makes Axie Infinity unique is that this wild growth is just the first step in a much larger plan that includes vertical integration, aggregation, decentralization, and literal worldbuilding.” He sees potential in the game to help non-crypto enthusiasts find new economic opportunities and says that the game has the “true promise” of NFTs.

The purpose and focus of NFTs do, in fact, seem to be shifting. Data from crypto analysis platform Blockcrypto indicated back in January that close to 90 percent of all NFT sales stem from crypto works of art, like the world renowned Beeple collage . Now, art sales only account for 40 percent of all NFT sales worldwide, with the majority now being made within the greater context of crypto games. For example, when an Axie Infinity player finds a buyer for their painstakingly bred monster. 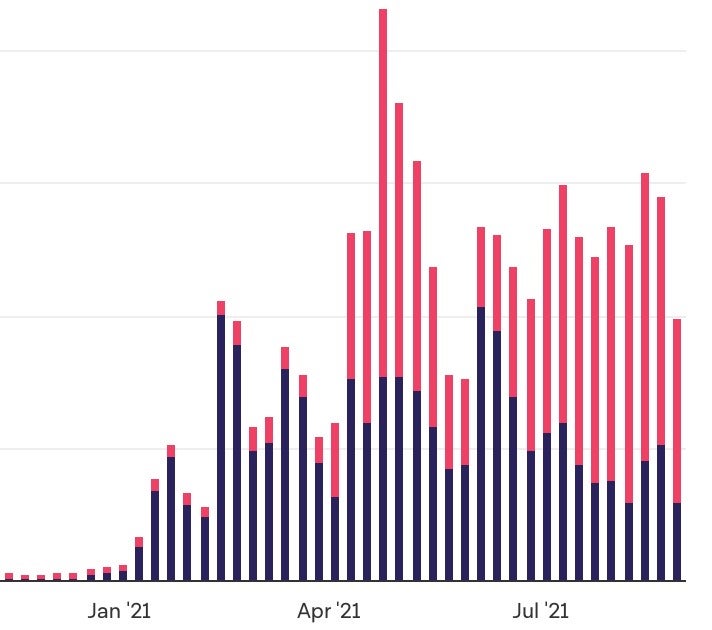 Gamers topping arties: Initially, 90% of all NFT sales were crypto works of art (in blue); now games account for 60% of all NFTs sales (in red). Source: The Blockcrypto

One reason could be that there is less volatility in the price of game-based NFTs than there are with art collectibles. While the seven NFT gaming platforms that the Blockcrypto analyzed, including big dogs Opeansea and Sorare, found that the average value of an NFT was in the lower 3-figure range—a figure that corresponds to the market price for a Axie—prices have been gradually increasing for the past year without any dramatic highs or lows. Contrast that with the average sales’ price of art collectibles which has fluctuated between USD 1000 and 90,000 since the beginning of the year, i.e. an incalculable risk for investors.

Is the future a marketing platform?

It does appear that Sky Mavis is aware that long-term success in the current set is dependent on a never-ending stream of new players. A company whitepaper indicates that they are planning on introducing additional incentives aimed at ensuring success in the long run. Mini-games, non-transferrable Axies, advertising fees and sponsorships are in the works. “Axie is already the largest community of people who understand how to use Blockchain technology in the world; there is immense value in advertising to a community like this,” the paper says. What it doesn’t say is who some possible partners may be.

Brands partnering up with play-to-earn games are, for the moment, more exception than rule. In fact, it’s only fashion label Burberry, who in August launched its own NFT on play-to-earn platform Blankos Block Party. On other crypto-platforms, like Roblox and Fortnite, where players cannot earn money, brand co-ops with NFTs are very much the rule. On Roblox, players can already take a stroll through the Gucci Garden or get some air on the Vans Halfpipe. On Fortnite, players can buy official Nike skins (for more on that trend, check out the OMR keynote from earlier this year).

All possibilities for Axie Infinity and its million DAUs. If future ad revenue won’t cut it, the company has not ruled out government assistance. Axie Infinity, according to the whitepaper, ” is well poised to become a laboratory for Universal basic income experiments.” There has not been any indication yet that Axie players are aware of their possible role in any social experiments.