The KPIs are of course killer: 7.5 million, 3.4 million and 2.8 million impressions. Pages that do nothing more than steal and publish entire chunks of Instagram content to their own sites—including pics, descriptions, hashtags, comments and likes. A look at where the traffic comes from and how exactly the sites are able to monetize their reach.

With over a billion active users per month, Instagram is one of—if not the—hottest platform around. Countless bits of content are uploaded by users around the world every second—and it’s not just Insta and parent company Facebook that stand to profit. The Internet is inundated with thousands of sites that scrape the image platform to rip off and republish the content to their own sites. In the past weeks and months, a few of these second-hand publishers have seen their traffic absolutely explode. The question begs, how exactly did it come to this?

Webstagram, Websta, Pikview, Yooying, Picbon, Instahu and Pikdo have two things in common: their cheap appearance and millions in reach. These so-called Instagram online or web viewers exploit the Instagram API (the interface that analytics programs also use) to directly pick off content from Instagram and publish it on its own page. 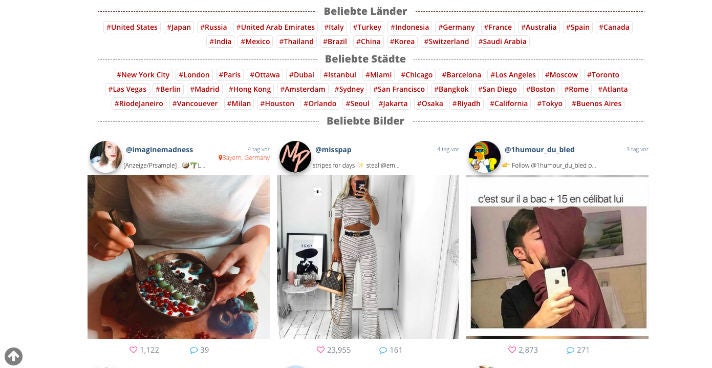 The added value of such pages is next to nothing. Ever since the Instagram feed is accessible via standard desktop browsers, both registered and unregistered users can view content from public Instagram profiles. Thus, these web viewers are not filling a market need by allowing unregistered users to view Instagram content. Further, the web viewers promise to display users the most-popular hashtags in general or those on specific topics. These, however, are extremely generic and typically lack context, e.g. #girl, #nofilter, #repost or #love. Additional value props like “discover popular pics or channels” also lack substance as the suggested images seemingly follow no rhyme or reason; top suggested channels include Justin Bieber, Kylie Jenner and Lionel Messi.

Where’s the traffic coming from?

And yet, these pages still generate millions in reach. A look into the analysis tool Similar Web shows not only that a page like Yooying.com in August 2018 generates 7.5 million visits, but also how visits get to the page. The web viewers we looked at notched between 70 and 92 percent in search traffic—unsurprisingly 100 percent of which comes from Google. That traffic breaks down in normal search and images searches. While one web viewer gets 98 percent of its traffic via search, another has 67 percent via image search. In short, it’s classic SEO as the majority of users end up on these pages after searching for certain terms that are covered by these pages.

The bulk of web viewer traffic comes via search

The biggest advantage web viewers have is that they can simply take over numerous keywords and Instagram user handles on the platform. If you search for the Instagram handles for Justin Bieber or other celebs, you’ll find these pages in your search result. According to analytics tool Sistrix, websta.one ranks number 1 on more than 103,000 keywords. It would appear that the majority of traffic stems from search queries containing names of popular persons combined with “Instagram.” Example: according to Similar Web, the search query “Lino Guincale Instagram” delivered 0.57% of websta.one’s traffic in August 2018. Guincale is an Italian actor with a paltry 7000 Instagram followers. If you enter that search term, you’ll only see the links to Instagram—it’s not until page two that links to the web viewers appear. And that appears to be enough to generate millions in reach with so many keywords.

There is one more thing that all Instagram web viewers have in common: They are chock full of Google Adsense banners. Some are cleverly embedded as tiles between images. We can only estimate, exactly how much a page operator earns from millions in reach. If we take an average CPC of 30 cents for one ad, and 0.1 percent of monthly visitors end up clicking ad from Yooying.com (7.5 million visits per month), then that would mean revenue of EUR 2100 each month. If that figure creeps up to 1 percent, then we are talking about 21K in revenue.

And what about Instagram’s thoughts on the matter? The company declined comment on individual cases and referred to its API guidelines. Against the backdrop of the Cambridge Analytica scandal, Facebook shut down numerous Instagram interfaces in April 2018—much to the chagrin of developers everywhere. The move accelerated the long-planned deactivation of the antiquated API. To this point, it has not impacted the performance of the web viewers, as new posts on various Instagram channels are posted here directly. In December 2018, programmers are said to no longer be able to read out public content automatically via the old interface—perhaps then the rip-off pages will meet their demise.

Shout out to Christoph Burseg for calling our attention to the topic.

Vorheriger Artikel:“Every huge lesson I have learned is because I have taken risks”