Jem Wolfie posts scantily clad pics of her Kim Kardashian body—her words—on Instagram. The posts (and the bod) have net the young las from Perth an excess of 2.6 million fans on the image sharing platform. “I started posting content on social media, mainly Instagram, about 5 years ago.”, says Wolfie. “The fans came because I listened and as long as their requests were acceptable to me, I gave them more of what they wanted. I think this is why I attract genuine fans as they understand what I do and how far I will go.” And it’s this attention and reach that she was able to leverage into a heavy payday away from Instagram.

So grateful. This past week I’ve had more of you come up to me in the street more than ever before. (Oh hey perth!) A few emotional encounters too, people who reminded me why I do what I do. Such a privilege and an honour to be able to call you all my Wolfgang. To be able to meet people who have made me who I am today. I promise to keep giving back to the community and to keep giving you quality content. We are family and I love you all 🐺😍 #Wolfgang

On her Instagram account, Wolfie directs her followers to premium content via a link in her profile to her account on OnlyFans . Wolfie says she earns up to USD 30,000 per day on the platform. In her first 8 months of activity on OnlyFans she earned USD 1.3 million—which prompeted a backlash in her native Australia.

Despite there not be a requisite for explicit content, the majority of the 50,000 creators on the platform do bare a great deal. It makes sense from OnlyFans perspective to provide a home for such content. For OnlyFans a common funnel is influencers and adult actors refrain from showing too much skin on Instagram or Twitter (it’s illegal on Instagram), merely teasing that there is more to see on their OnlyFans account, the links to which they post in their bios and descriptions. Adult star Christy Mack, for example, aggressively pushes her OnlyFans account by posting several tweets referring fans to that account and the exclusive content only found on OnlyFans. 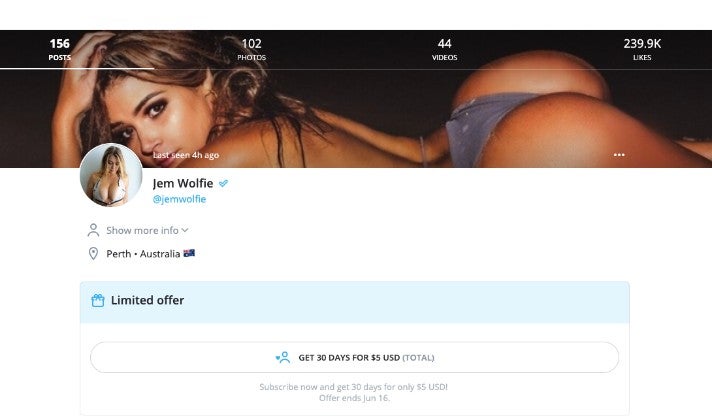 When you go to an OnlyFans account, like Jem Wolfie’s, you don’t see anything at all initially. To see the exclusive content, you first need to pay for a subscription, which is currently USD 5 for the first 30 days. After the first month, the price increases to USD 10 a month and is only applicable to Wolfie’s content. Although that is on the same price level as a Netflix subscription, many of the top OnlyFans accounts make enough to live off of. Subscription prices can be freely determined by the content creators and generally charge between USD 5 and 20 per month. There is no price cap. In addition, fans can leave tips, which can be given as kudos for the content or used to pay for personalized content. OnlyFans retains 20% in commission for every transaction on the platform.

No app, but users aplenty

“‘I think OnlyFans is a force for good and an incredible way to make an income from your content.”, says Wolfie. there are a growing number of mainstream influencers who create valuable content that fans and followers are happy to pay for. Personal trainers, makeup artists and other content creators I know are posting workouts and tutorials and having amazing success.” For her part, Wolfie is a top earner although she refrains from posting x-rated content. Perhaps the OnlyFans model could be viable for influencers to fairly monetize their content. Although Wolfie doesn’t only engage in sponsorship deals for her Instagram, curating her own fashion collection and fitness program–but those are available on other platforms.

Further reading on this topic
Talk of the town
Torben Lux & Scott Peterson6.4.2017