“We did the exact opposite of what banks were doing,” Nobel Peace Prize winner Prof Muhammed Yunus in the OMR Podcast

Today, we are joined by Yunus Mohammed and Saskia Bruysken, founders and CEOs of Yunus Social Business

Using the power of money to end poverty and combat climate change. That is the stated goal of Mohammed Yunus and Saskia Bruysten, CEOs and co-founders of Yunus Social Business. Those ambitions are lofty to say the least and you would be forgiven for calling them utopian or worse. If Professor Yunus’ career and history have taught us anything, however, it is to expect the impossible. A pioneer of social business, he has convinced CEOs of major companies to invest significant sums of money with zero prospect of monetary return, started a bank based on doing the opposite of what standard banks would do and is dedicated to harnessing business and financial to affect social change. While the problems Prof. Yunus and Saskia Bruysten, CEOs and co-founders of Yunus Social Business, hope to solve may seem impossible, the way they laid out the path to success in this episode of the OMR Podcast, impossible seems plausible.

Born and raised in Bangladesh, Professor Mohammed Yunus has a résumé to which superlatives fail to do it justice: banker, economist, social entrepreneur, professor, academic. He was chancellor at Glasgow Caledonian University, has penned numerous best sellers, is a member of the board of the United Nations Foundation and was awarded the Nobel Peace Prize. His story really starts after his home nation emerged from a devastating war of independence. He left his position as an economics professor at Middle Tennessee State University to return home and help his country recover. So, he did what he did best and started teaching economics at the newly formed University of Chittagong in Bangladesh. He quickly realized, however, that his skillset was of no help. “I saw poverty everywhere, widespread famine and dead bodies along the road and sidewalks. How could economics be of any service to people? I felt I had wasted my time, that economics was unable to help others and I no longer wanted to teach it to my students.” 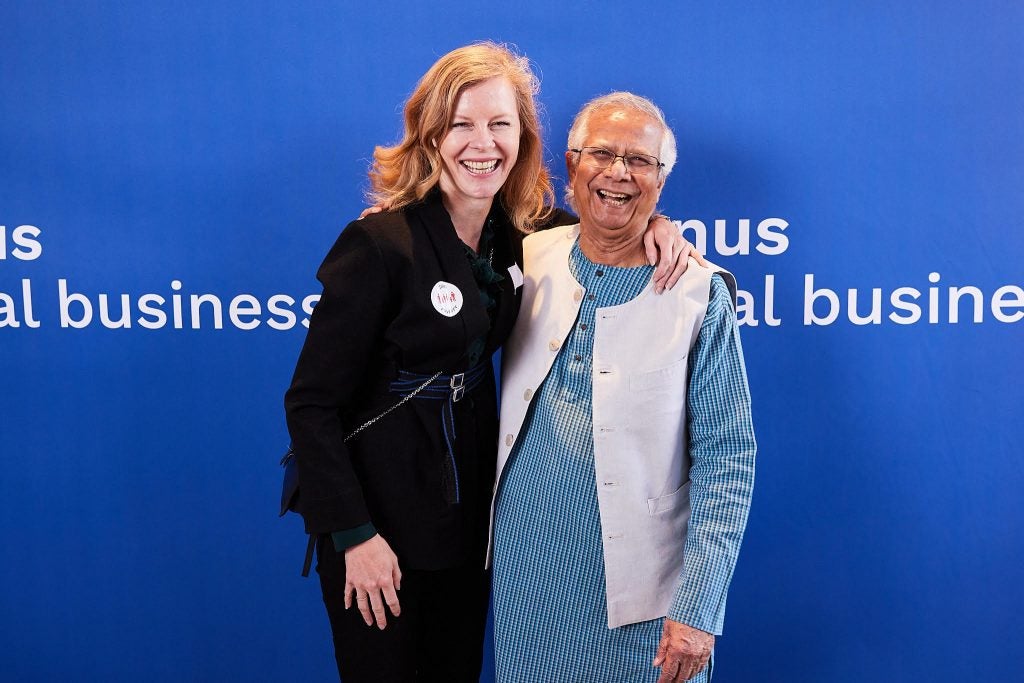 Unable to look stand idly by, he went to a village near the university campus that needed assistance. “I may not be able to help the entire village, but I certainly have the capacity to help one single person.” Going there daily, he got to know the villagers and see their problems first-hand, one of the biggest of which was loansharking. “To protect these people from these loansharks, the idea came to my mind to lend them the money myself,” Prof. Yunus recalls. Unbeknownst to him at the time, by wanting to save a single person from a predatory lender, Prof. Yunus had created microlending and microcredit. Soon after he created Grameen Bank, a bank that specialized in microcredit and microfinance and “lending money to poor people without the need of collateral. We challenged all the rules of the banking system. Whatever banks would typically do, we would do the opposite.” One of those contrarian moves was to hand over the bank to women. “To this day, over 90% of people in the banking sector are men.” His work at Grameen bank would earn him the 2006 Nobel Peace Prize.

With Grameen in safe hands, Yunus’s next endeavor would be a continuation of what was now his focus life’s work. Founded by Prof. Yunus and Saskia Bruysten in 2011, Yunus Social Business aims to “harness the power of business to end poverty and the climate crisis.” But what, exactly, makes a business a social business? According to Prof. Yunus, “the goal of any business is the maximization of profit. You invest to make money. Social businesses are designed to solve human problems. They are run like a normal business, focus on profit maximization, but the return on investment is not monetary.” Instead, he says that while social businesses also have a product to sell, they recycle all profits and revenues back into the business itself. As someone trained in the conventional mode of economics and profit maximization, Saskia Bruysten saw in social businesses a way to make societal contributions without being forced to vacate the private sector. “A business that is 100% focussed on solving social problems made so much sense,” she recalls of hearing Prof Yunus discuss the concept of social business back in 2008. “With my business background, I didn’t feel comfortable doing something government-related or in an NGO, as they felt like massive structures that were boring and slow.”

“Business is the driver that will make the difference.”

“In my view, the economy in general and business specifically is one of the strongest forces we have in society and we can harness its power to address massive problems, such as poverty, climate change, etc. Business is going to be the driver that makes the difference,” Saskia says. Applying the tenets of business to social endeavors may sound straightforward enough in a vacuum, but how do you convince entrepreneurs or companies, who have been schooled in and are typically driven by the profit motive to get on board with such a radical rethink of returns? According to Prof. Yunus, it’s very simple. He taps into the profit and return part of the equation, without the monetary aspect. “Most of these entities already have a foundation. So why not invest money, instead of giving it away? Money you invest in a charity or a foundation has only one life. You can use it once—money goes and never comes back. Money invested in a social business has an endless life—it comes back again and again and is reinvested in the business to keep it going. So, instead of donating to charity just create a social business to address the same issue.”

To hear how Prof Yunus pioneered gender equity and issues of race, and how Yunus Social Business convinced Yogurt maker Danon to invest millions in Bangladesh, check out the entire episode of the OMR Podcast with Prof. Mohammed Yunus and Saskia Bruysten.