Next article:How a 50-something German used car karaoke to turn Rihanna, Chris Brown and Cypress Hill (and 1.5M others) into fans.
Roland Eisenbrand & Scott Peterson

Is augmented reality really poised to take over the marketing mainstream?

An 18-year-old influencer from the US notched 17 billion views with just over 2 dozen augmented reality lenses on Snapchat, while a Russian teen needed just over a fortnight for over a billion views for his single AR effect on Instagram, where users play “Flappy Bird” by blinking. With the next generation taking a shine to all things AR, it’s no wonder that an increasing number of brands and companies have taken note and begun releasing a host of effects, lenses and filters. OMR spoke to one of the most successful Insta AR developers, who shared figures and insights on the current market status.

“Wow, My effect went crazy and has reached 1 billion views (355m views in camera and 663m views in stories) in just 2 weeks. Thank you all❤❤❤,” wrote Mikhail Murtazin back in June, who is active on Instagram under the name “dvoshansky” in a Facebook group for Spark AR developers, including a screenshot to back up his claims. Spark, for those of you that don’t know, is the augmented reality platform that Facebook first announced as a “camera effects platform” in 2017 and then opened it up to external developers in October 2018, and ever since it’s been at the core of every AR application on FB and Insta. For developers interested in developing and releasing their own effects, Facebook, made its Spark AR Studio software available to download for free.

Murtazin participated in a closed beta phase, where independent developers could apply to Facebook to develop effects with Spark Facebook and Instagram. The young Russian developer (if his Instagram images are any indication, he’s still a teen) integrated Flappy Bird, a mobile game that went viral in 2013, and did so as a simple effect in the Instagram Story camera and named it “Flying Face.” The effect lets users play Flappy Bird right in the story camera and control the flying bird by blinking.

Just like the original Flappy Bird app six years ago, the Instagram effect, too, has been a viral sensation—especially in Southeast Asia. If you run a simple Youtube search for “Flying Face,” you’ll find a host of videos from Indonesia, Malaysia and Singapore with views in the 6 to 7 figure range. And all that in the span of just a couple of weeks! On Instagram, the effect has generated over a billion impressions. Sure, Instagram probably counts multiple impressions by a single user individually (hard to fathom that nearly every single one of over 1 billion registered Instagram users have used “Flying Face”), but the figures are nevertheless astounding.

From Kotti to Cali 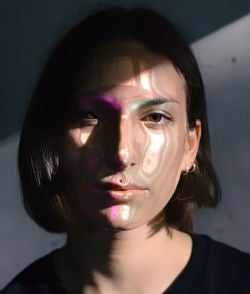 Johanna Jaskowska, obscured by her own AR effect Beauty3000

Murtazin is not the only one generating figures of this magnitude with AR effects on Instagram. Johanna Jaskowska, a French-Polish digital creator based in Berlin, developed several filters that have, according to her own figures, also netted over a billion views. “The figures are crazy,” Jaskowska told OMR. The 27-year old’s filters aren’t as playful and are more on the futuristic, dystopian end of the spectrum and render users in the appearance of a work of art.

Her most sucessful filter, Beauty3000, has also been a viral hit and received coverage by such media outlets as Vogue, Vice and The Verge. Earlier in the year, Beauty 3000 was featured in a keynote at Facebook’s F8 conference in California; Jaskowska even participated in a panel discussion. Since its release in January 2019, the filter has notched 419 million views, as a screenshot provided to OMR from Jaskovska shows.

The impressions that Instagram counts for its filters are derived from two sources: Story impressions and Camera impressions. For Story impressions an effect has to be used by an Instagram user and then posted in a story. In this case, both the filter name and the developer are included in the post in the upper right. Camera Impressions are counted every time a user searches available filter in story camera mode and views a given filter in this area.

During Spark AR’s closed-beta testing, Instagram users were required to follow a creator if they wanted to use their filter. The stipulation resulted in creators having a massive increase in followers. Johanna Jaskovska’s Instagram account had friends and acquaintances from personal and professional circles; know she has over 822,000 followers. Mikhail Murtazin, (“dvoshansky”) on Instagram, has more than 5 million followers. The beta phase ended on August 13, meaning now any developer can develop effects for Spark AR; for its part, Instagram has released a dedicated area in the app to browse all available filters.

If you have browsed all available effects in Instagram Story mode, you’ll be prompted to go to a gallery with additional effects

Small wonder that this feature increases the visibility of AR effects. Developer Danny Franzreb from Neu-Ul, Germany has also developed several effects for Instagram. His most successful is“Frame Filter”, which has just over a million impressions, according to Franzeb’s own figures, lets users place filters on their images or videos. “160,000 of the impressions are camera impressions. 143,000 of those have come in the past week alone,” Franzreb told OMR, i.e. in the same amount of time that the filter section has been available in the story camera mode.

The figures are indicative of the massive reach potential for AR effects on Instagram, which brands and companies are increasingly taking note of. Johanna Jaskowska, who began as an employee at an agency and then started working as a freelancer developing and realizing a host of digital projects, now exclusively works on AR projects since here Beauty3000 viral hit. “It usually takes 3 to 6 weeks at the most to develop an Instagram AR effect, depending on how intricate the effects need to be,” says the 27-year old. The level of complexity also influences the price, which “ranges between €7000 and €25,000.”

Popstars and high-fashion brands use AR for marketing

For her last agency job, Jaskovska developed a filter for Mercedes-Benz. She said that since then she has been taken on jobs as a freelancer for brands such as Burberry and for music labels. For example, she developed an Instagram AR effect for shooting star of the pop scene Billie Eilish and most recently for Colombian Reggaeton singer J. Balvin (32 million followers on Instagram). Just how much reach those effects have generated, she cannot say, since the personal accounts of the stars are overseen by the stars themselves. One indicator of the format’s burgeoning relevance, however, is the sheer number of big name brands and companies experimenting with the format. Googling additional Instagram AR cases, for example, will yield big names like like Adidas, Disney, Gucci and Kylie Cosmetics (by super influencer Kylie Jenner) who have all recently released effects.

Similar to Facebook (including Instagram), Snap has also longsince been active in AR. Snap’s products haeve already served as “inspiration” for Facebook’s story formats. Since December 2017, Snap’s “Lens Studio” has been available for use, where users can create and use selfmade AR lenses.

17 billion views with a virtual makeover

Ambitious developers can also apply to be included in the Lens Creator program. Lenses by official creators are then made available in a dedicated section for all app users. Currently there are more than 100 official partner developers.

AR Lenses have also generated some jaw-dropping numbers. Since October 2018, 18-year old Ana Casciello developed round about 30 AR lenses for Snap, which, among other things, let Snap users give themselves star, heart or flower-shaped freckles. According to this very interesting CNN article Casciello has turned the 30 lenses into 17 billion views.

Just like AR developers on Instagram, Lense Creators on Snap are not paid for their work. Developers on Snap are, however, also more frequently approached by brands and companies to develop their own branded lenses. Ben Knutson, a developer quoted in the aforementioned CNN article, says he has already made Lenses for Nike, Red Bull Norwegian chocolate brand Freia.

According to CNN, the costs for developing an AR lens for Snapchat ranges from $1000 to $30,000. The open path to developing proprietary lenses via independent developers makes it a much cost-effective proposition for companies: In December 2017 Digiday reported, that Snap generated between $500,000 and $1m per day (!) for such lenses.

For the platforms, effects are leveraged into user numbers

Going the independent developer route can have additional advantages according to a BI article from September 2018:. The article states that gaming app Plato hired two teenage influencers to create AR lenses distribute them via their own accounts. “It was not only cheaper, but it actually helped us reach the audience we wanted to reach… [that is] young millennials and Gen Z,” said Plato’s Joe Wagner. The lenses generated 2.1 million and 3.1 million views respectively; the total spend was a mere USD 50,000.

Even if Snap doesn’t see any of the ad budgets: Opening up AR lense creation to any developer might still prove to be a profitable decision from a strategic point of view. Snap had a tumultuous year, in which there was a very controversial redesign and shrinking user figures. Viral lenses were a tried and tested means of generating new users for the company in the past. Last quarter, the “Gender Swap” lens and baby lens were both viral hits. These two lenses alone are said to have generated between seven and nine million new users, said financial head Derek Andersen during the most recent earnings call. With a wide range of independent developers in tow, the probability of a further stream of viral lenses seems likely.

Previous article:Gimlet Media co-founder Matt Lieber—how and why podcasts are set to become a billion-dollar industry

Further reading on this topic
MobileSocialTalk of the town

How a German Influencer Leveraged Instagram Filters into 3 Billion Views