“Using funnels to acquire customers is old news—you need to build a flywheel!” That’s paraphrasing the battle cry to be heard and read from many a marketing guru in the past months. What does it mean? OMR takes a closer look at its genesis and why marketers believe that it’s so relevant now.

“Pivot,” “disruption,” “Minimum Viable Product” – when start-up founders, venture capitalists and digital marketers get together, they tend to speak their own language. On the one hand, knowing those terms aid in understanding and explaining business processes and factors in their success or lack thereof. On the other hand, they are a type of code used by those interested in demonstrating that they are industry experts. And there is no bigger coded language nugget du jour than Flywheel in the past 12 months.

Those in the business know know about the Flywheel

A Google search for “flywheel effect” (to reduce getting search results of companies with Flywheel in the name) yields several search results from last week alone. Ken Washington, the Chief Technology Officer at Ford, whose job it is to defeat Tesla, likes to prop himself up to journalists at British daily The Telegraph by using expresions such as “Thought Leader” and “Flywheel Effect.” The CEO at Super League Gaming, the operators of an eSports Community, explained in the most recent quarterly report that the “Flywheel effect” is beginning to take effect on company growth. Payment network Ripple also published a study, according to which “the flywheel is in motion” on Blockchain-based payments.

The term stems from physics, where flywheels signify any mechanical device specifically designed to efficiently store rotational (kinetic) energy. Flywheels resist changes in rotational speed by their moment of inertia, meaning once they are in motion, they are difficult to slow. Flywheels are used in combustion motors and sewing machines.

The dot.com bubble and the flywheel

The flywheel has become a symbol of business and marketing processes primarily due to the effort of two people: Jim Collins and one Jeffrey Bezos. According to this Wikipedia entry, Collins, a management expert and former professor at Stanford, was working on a book on management principles at successful companies back in 2001, when his former student, Jeff Bezos, called him up. His company, Amazon, is going through a rough stretch after the dot.com bubble burst and Bezos solicits Collins for support.

At an off event, Collins shows the Amazon management team his flywheel concept, which he also includes in his very successful book “Good to Great”*. Basically, managers should picture their companies as a heavy wheel that can only be set into permanent motion via the intelligent and repeated application of energy and one that only slowly picks up speed.

A sketch jotted down on a napkin

Apparently, the image struck a chord with Jeff Bezos and his cohorts: “They took the flywheel concept and made something of their own out of it,” as Collins said recently in the “Recode Decode” podcast. According to the legend, Amazon boss Bezos wrote down a sketch of the Amazon flywheel on a napkin, in the middle of which was growth spinning the Amazon wheel. 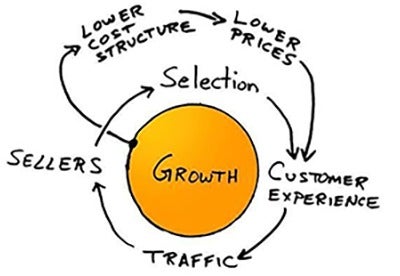 The Amazon flywheel according to Jeff Bezos (Source: Amazon.jobs)

The first step to setting growth at Amazon in motion according to Bezos is ensuring a positive customer experience. That, he says, will lead to an increase in customers, which, in turn, boosts the relevance for merchants. And when more merchants sell their wares on Amazon, the product offer increases, which has a positive impact on customer experience. And once those balls are rolling there is another positive: achieving such growth would enable Amazon to reduce costs and simultaneously lower prices for customers; another net positive with regard to the customer experience. You can still find a video from Amazon’s early days on Youtube, featuring Consumer CEO Jeff Wilke explaining the concept to employees.

The rest is history. Over the years, Bezos has propelled Amazon to an absurd amount of growth. For years, the company failed to turn a profit, but generated a massive amount of revenue and achieved a company valuation of over USD 1 trillion. To this day, Amazon continues to tout the “positive cycle” on the Amazon jobs’ site as “still remains a living, breathing part of Amazon.”

The flywheel concept made the rounds in the digital and startup scene; today there are a host of companies that feature the term in their names: the Uber-esque taxi startup Flywheel, cycling company company Flywheel Sports, VC fund Flywheel Ventures, a WordPress hosting startup and a medical imaging cloud platform .

Hubspot’s CEO ushered in the renaissance of the term

In the past 12 months, flywheel as a term has come back into fashion primarily thanks to Brian Halligan, founder and CEO of marketing software provider Hubspot. Halligan transposed the flywheel concept to marketing—and created a content piece that generated a ton of organic resonance. In a guest post for Harvard Business Review in November 2018 Halligan declaimed that the concept of the sales funnel is outdated and needed to be replaced by the flywheel. Just how marketers can change concepts, he and his team explained in detail on Hubspot. 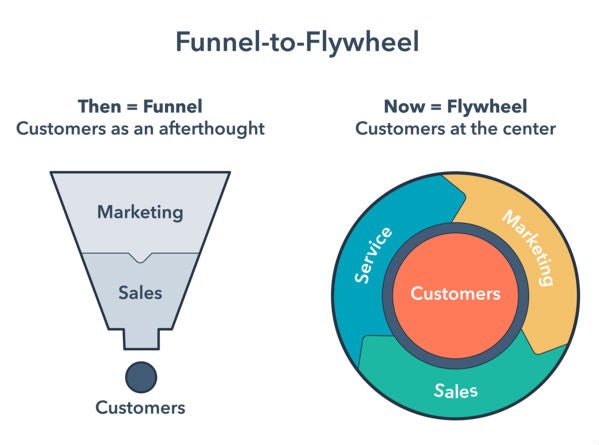 Why the flywheel needs to replace the funnel according to Hubspot (Source: Hubspot)

If you google “flywheel marketing,” there are a host of indications that Halligan’s idea was received positively. It shouldn’t surprise anyone that Halligan’s idea is a clever reaction to the current trends on the current platform economy. Even before Halligan’s post went viral, there were grumblings all around digital marketing circles that customer acquisition costs were becoming prohibitively expensive on platforms on Google and Facebook in the past few years.  Whenever customer acquisition costs on platforms skyrocket, the focus of marketers should be to earn more from existing customers (podcast in German) or to convince them to act as product ambassadors.

Good enough for the kids, too?

Jim Collins, now 61, has recognized the need to explain the flywheel concept with reference to the current market. His newest book “Turning the Flywheel,” released in February 2019 as a supplement for “Good to Great,” refreshes the flywheel concept to be viable on the modern market. Collins’ message is reaching lots of ears—even unintended ones. Grade school teachers in rural Kansas told him that they use the flywheel to improve the test results among their students.

* Disclosure: The links to Collins’ books are affiliate links to Amazon. If you click them and buy the book through, we’ll receive a small commission.