SWITCHING SIDES: HOW DJ KHALED USED SNAPCHAT TO GET BIG ONLY TO JUMP SHIP FOR INSTAGRAM

It’s been a rough couple of weeks for Snap. First Facebook straight up jacked several functions from Snap, then chief executive chosen one Evan Spiegel reported massively disappointing quarterly figures and user growth leading to the collapse of its share price. And now Snap’s top influencer, DJ Khaled, is set to launch his own show on Instagram, i.e. the competition. The show has some hefty backing, too, receiving funding from a media company that is a part of the extended Disney family—and which previously was exclusively active on Snapchat, and is now only on Instagram. Whether it’s a sign of the beginning of the end or merely a bump in the road, it’s not optimal.

“When we made the decision to switch, we said ‘let’s create a new type of media company,’” Daniel Altmann recently told Business Insider. Altmann is co-founder and CEO of Naritiv, the aforementioned Disney-funded company founded in 2014 through the Disney accelerator; in 2015 it launched as a marketing platform for Snapchat.

In addition to providing the standard range of agency services, including getting brands in touch with influencers, Naritiv also developed a proprietary analytics solution that provides advertisers with figures on their campaigns. In a relatively short amount of time, the company was able to raise roughly USD 4.3 million in capital. In early 2016, Third Wave Digital led a series-A round of financing which raised approx. USD 3 million for Naritiv. One of the biggest investors in the round is The Walt Disney Company.

But gone is the original business model based on Snapchat—and founder Altmann is raving about Instagram. “As a media company, Instagram can almost mimic what was once the role of a website. Over the last year, they keep doing things that intrigue us and we are consistently using it in different ways.” In March of this year, Naritiv sold its Snapchat analytics tool for USD 3 million to Canadian social media marketing company Hootsuite. Altmann says it was always the plan to develop Naritiv into a media company. The core issue for Altmann with Snapchat is that “Snapchat wants friends, not brands.” In addition to switching platforms, the startup also switched its core focus.

“A music-focused lifestyle brand creating original stories in new ways for a curios audience”, that is the verbatim website description of the new project WeBuyGold. Practically speaking, it works like this: on the Instagram account with the same name, various musicians and stars from the US hip-hop scene are packaged in quickly consumed feature stories, short teasers and micro documentaries. Some of the stars featured thus far include LA-based rapper Hodgy Beats (whose most successful YouTube video has netted over 42 million views), photographer Cameron “Cam Kirk” Kirkland—and DJ Khaled with the “The Bless Up” show.

DJ Khaled especially would figure to be the reach driver for WeBuyGold. New Orleans producer DJ Khaled has not only worked with a who’s who of the industry in the past years—his current single “I’m the one” featuring Justin Bieber, Lil Wayne, Chance The Rapper and Quavo debuted at number one on the billboard charts, and generated 133 million plays on Spotify and 150 million views on YouTube—but he’s also flourishing as a social media heavyweight.

His clever Snapchat strategy has been well-covered ever since he used Snapchat to document his adventure aboard a jet-ski in the pitch black waters off the coast of Miami—which almost certainly gave the app a nice little bump. His multiple catch phrases (“major key alert,” “another one” and “bless up”) and glimpses into his life as a rap producer and father have made him both beloved and successful, and his Snaps routinely notch 2 million views each. Khaled taking his show, brand and incredible reach to the competition speaks volumes about the success of the platform. For WeBuyGold, DJ Khaled donned the guise of Creative Director.

Naritiv strikes gold as an agency on Snapchat

The booming success of Instagram Stories in combination with the analytics power of Facebook that makes it easier for publishers to analyze target groups, are the major factors responsible for leaving Snapchat, says Altmann. The live function, as well, contributed to the decision, he says. Roughly three months after launch, the Instagram account has amassed a solid 14,200 subscribers.

DIf the press reports are to be believed, Naritiv did quite well with its Snapchat-based business. In early 2015, Naritiv’s campaign for the mystery TV series “Pretty Little Liars” helped net it nearly a million followers for the format’s account in a single quarter. Just a year later, the LA Times reported that Naritiv was working together with 300 operators of Snapchat accounts who together netted 16 billion views a month and implemented some 100 campaigns. The list of clients ould hardly have more name recognition: Coca Cola, L’Oréal and Marriot. Forbes, too, was a firm believer in Naritiv’s potential putting founders Altmann and Eric Posen in the latest “30 Under 30” ranking for Marketing und Advertising. 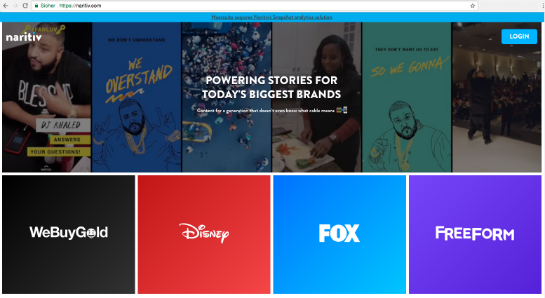 Instagram copies Snapchat – And leaves it in the dust

It’s no secret that Instagram ripped of, or was heavily inspired by, Snapchat for Stories. Still, it’s incredible how successful Instagram has been with its new functions. Since launching in Q3 of 2016, not only has Snapchat’s growth for daily users slowed considerably, but Instagram has profited greatly, announcing that just on Stories there are 200 million users a day. According to official company figures, Snapchat has 161 million users a day on the entire platform.

The shift in use is not lost on influencers. In our own dealings with German influencers, such as OhhCouture, Daniel “Magic Fox” Fuchs, Novalanalove, et al, we have heard about the shift from Snapchat to Instagram Stories, where the reach is much greater.

In the USA, media houses are experimenting on both platforms. People.com (a member of Time, inc.), was, for example, a launch partner of Snapchat Discover stateside and continues to be represented there, but has also expanded its activities heavily to Instagram Stories. Zoe Ruderman, Executive Director of Content Strategy, told Adexchanger.com about the various areas of use saying that the presence on Snapchat “reads like a mini-magazine.” “It goes out every day at 6 a.m., and it’s a very polished experience.” Instagram Stories, according to Oren Katzeff, programming head at Tastemade, is better suited “for more unscripted and authentic peeks at its content.”

A major difference of significance for media houses is that there is no way of monetizing at present. The reach that publishers can attain on Snapchat Discover can be marketed and sold as inventory. Instagram, however, has yet to launch the feature. While Facebook’s image platform is testing mid-roll ads on stories, it remains unclear if publishers stand to profit. On Instagram, account operators are resigned to publishing sponsored posts and native advertising in their own feeds.

Although Instagram is pilfering oodles of users from Snapchat at the moment, Spiegel continues to expand the partnerships with media houses. In late April, Bild, Spiegel Online, Vice Deutschland and Sky Sports became the first German publishers to launch on Snapchat Discover. Both Spiegel Online, who installed a 10-person strong team dedicated to creating content on the platform, and Bild are set to test, how to best reach the much-sought after millennial target group. For its part, Spiegel Online wants to cut out the entertainment elements and focus on “hard news,” while Bild will be publishing a mix of political and entertainment content.