Uwe Baltner and where the magic happens.

Uwe Baltner sings and records covers of popular songs in his car.

Hip-hop artists like Chris Brown, Cypress Hill, Stormzy and Yung Hurn have shared his clips, he counts Rihanna among his Instagram followers, which have exploded up to 1.5 million within a calendar year. You’d be forgiven for not expecting such a description to apply to someone like Uwe Baltner, a 50-something German. So how did the “Singing Swabian,” owner/operator of a German agency manage to become a hit with karaoke clips recorded in his car? OMR caught up with Uwe Baltner and broke down his improbable story.

There is much that can be said about Uwe Baltner’s Instagram clips. But one thing is for sure: there is no “meh” reaction to his videos. No matter if you find it incredibly awkward watching and listening to an amateur singer who doesn’t always quite hit the right notes, no matter if you like Baltner’s covers or if you take delight in his unbridled enthusiasm, you are likely to have a strong reaction one way or the other. “That’s just what happens when you jump right in and start singing,” Baltner told me over the phone. “Studio equipment today is so refined that everything sounds so over produced. That leads to people not wanting to even try to sing. I want to show people how fun singing can be.”

“Out of your comfort zone”

For just about a year, Baltner has been uploading at least one, sometimes several, videos to Instagram per day. The format is the same: Baltner sits in his car and sings to music blasting out of his car speakers (he drives a Fiat 500). The first time you see it, the premise seems absurd. The gulf between picture and audio is especially noticeable when the bespeckled 56-year-old with his silver mane starts rapping over the latest hip-hop hits. Baltner pulls no punches and will take on any track: whether that means spitting fire on a track by a Ghanian rapper in his native language, rocking a Jamaican accent, busting out a falsetto or tracks originally performed by a female artist. “You gotta get out of your comfort zone and discover new music and share it with others,” he says.

Baltner has been making music, in one form or another, since he was 15, when he played in a band. “Back then the only thing I could play was the accordion. And I sang, because I was the only one not afraid to sing.” He said that once he began college and got a job, music began to take a back seat. His professional stops include being a journalist at the local Stuttgart daily Stuttgarter Nachrichten, and then as Editor-in-Chief at German computer trade publication Chip magazine. Today, Baltner is co-owner of Baumann & Baltner an ad agency located close to Stuttgart that employs 16. “80% of our business is B2B communication.”

Every morning, Baltner makes the 38-kilometer commute to the office. On one of these daily treks he began passing the time by taking up his old hobby and doing voice exercises. “At some point I noticed that Instagram permits video uploads for clips of up to 1 minute.” In September 2018 he got the idea to upload karaoke videos. “No, I am not recording while driving; I don’t have a deathwish. For songs with higher degrees of difficulty, like rap, I pull over.” He sees himself as an extrovert with a sense of musical purpose. “I know that I put in more work when I know people are watching.”

Baltner includes an array of hashtags in his posts and usually tags the artists. Initially, he primarily performed older songs and those by non-mainstream artists, which explains why he has performed several songs by US punk rockers Screaming Females. This approach gave Baltner a few hundred followers. After a while, some of his subscribers began requesting songs in the comments—and Baltner fulfilled a handful of these. “My motivation was mainly crowd pleasing at first,” he said in a recent podcast of “Nettes Frettchen” (in German) .

“Teenies laugh at me”

Because of the song requests, Baltner began learning songs by artists he’d never heard of before, such as US artist Ariel Pink. When Pink shared Baltner’s cover version in his Instagram Stories, his followers jumped from 500 to over 4000. That gave him all the impetus he needed to try his first rap track, by Jay1, a Congo-born British grime rapper. “It had been years since I last listened to new stuff and zero rap,” says Baltner. He subscribed to a German podcast (Deutschlandfunk) to learn about new genres like grime and drill. “They opened me up to new horizons.”

The Jay1 cover was the first time he had views in the five-figure range—and the first time he garnered hate from young British grime fans. “I had a lot of laughing at you emojis from 13, 14 and 15-year-olds. I always try to respond with humor, which works great. I want to show people how they can phrase critiques and what has no place. I am a copywriter myself, so it keeps my chops up.” Today, his community defends him against negative comments.

“Nigerians are the nicest people on the Internet”

Whenever Baltner tries out new genres and tracks, he does so with the utmost respect. When he does rap covers, the N-word is tabu. “I’d never use such a term,” says Baltner. “You have to be respectful and mindful of cultural appropriation and to what extent music belongs to us all. In the end, my videos are an ode to fantastic music.”

The onrush of grime fans was topped when Baltner sang his first track by a Nigerian artist, “Ye” by Burna Boy. Nigerian music fans saw his cover for what it is: major props: “The overwhelming majority received it positively. Nigerians are the nicest people I have ever come across online,” says Baltner.

The number of song requests in the comments beneath Baltner’s videos kept growing; people started tagging their friends, all the while Baltner tried to stay in touch with his community. “I always try to respond to the first 200 to 300 comments. The private messages on Instagram have become too much.” He invests a couple of hours every day and half the day on the weekend into community maintenance. His engagement has surely also had a positive effect on his visibility and followers, since a regularly used comments section tends to prevent any negative impact from Instagram’s algorithm, which would keep his videos from being inserted into his fans’ feeds.

Baltner’s subscribers on the platform continue to grow and Jamaican dancehall artist Shenseea recently shared one of Baltner’s videos to her Instagram account; Austrian rapper Yung Hurn has shared Baltner’s videos in his stories twice. In January, Chris Brown posted Baltner’s cover of “No Guidance” to his account. Not only did Drake, Chris Brown’s duet partner on “No Guidance” and probably the biggest rapper in the world right now, comment on the post, but so did other famous rappers, like The Game. A day later Cypress Hill posted “Insane in the Membrane” to its channel. The result: 100,000 new followers in a week. 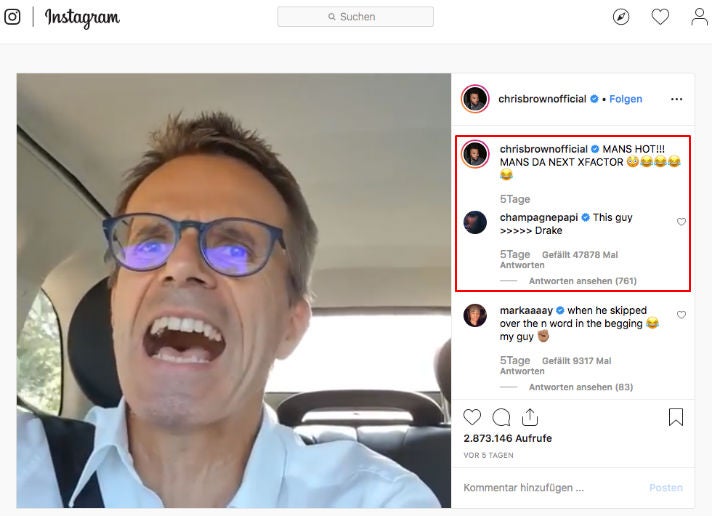 Ran through the meme grinder

“At the agency, we eventually explored ways of generating viral effects,” says Baltner. “I now think that continuity is a secret element of going viral. You just keep doing something until people are convinced of the concept.” His videos have now reached the point that they are being pilfered by other page operators and posted to Instagram, Facebook and Twitter. “It only really bothers me when the motivations are clearly commercial,” says Baltner. Several of the content thieves give Baltner’s videos the meme treatment and more or less drag Blatner through the muck. He thinks it’s “fantastic.” “I have a huge heart for people who make others laugh.”

Me listening to Travis Scott on the oldies station in 50 years pic.twitter.com/cFTqPZIbQe

Baltner now has over 1200 videos on Instagram. His biggest takeaway: “Exuding positivity is so valuable,” he says. “A lot of people don’t think much of my singing skills, but that I give off such positivity.” He says that for songs that require his full concentration (like rap tracks), where he cannot smile, people would ask what’s wrong. “It may sound silly, but my goal is to make as many people as possible happy.”

Influencer platforms are pretty much the pits

With 1.5 million followers, Baltner has become an influencer of sorts. “No one has approached me with any ad deals,” says the 56-year-old. Out of professional interest, he signed up to a couple of platforms that work as mediaries between influencers and advertisers. “It’s all pretty horrible,” says Baltner. Advertising companies want to give influencers very detailed requirements. “That would destroy any semblance of authenticity.”

This guy…. #lol 🥰 #uwebaltner knows more of the lyrics than my ass…… #soco #wizkid #afrobeats to the world baby 🤗 #abbeboo

Instead, Baltner receives requests from African artists, who want him to sing their songs. Two British rappers even invited him to their video shoot (Baltner declined due to the amount of time involved). A day after Chris Brown posted Baltner’s videos, his Ex started following him: Rihanna. “It cannot get any better than this,” says Baltner.