(image: im_mancuso on Instagram. No connection to the developer of “Supbot”)

Next article:Best of 2018: Here are the 10 most-read OMR articles of 2018
Roland Eisenbrand & Scott Peterson

The app costs 25 bucks and has been downloaded nearly 20,000 times

It’s not exactly commonplace for a teenager to become an entrepreneur while still living with mom and dad. And it’s an even rarer feat when their entrepreneurial efforts are met with success. In less than six months, Toronto’s Dante Laviolette generated over 280K in revenue with an app that lets users make automatic online purchases from the most-exclusive streetwear brand on the planet, Supreme. OMR took a closer look at his incredible story.

Employing bots to land much sought-after clothes or sneakers before they’re sold out is not exactly new. The market is flooded with bots that are designed to acquire the hottest kicks from Nike and Adidas the day they’re released. And recently, shrewd business types have been releasing bots with a new, singular focus: making purchases in the Supreme online shop. Getting your hands on such a piece of software usually runs you upwards of 50 USD, and some of them employ subscription models, where use licenses expire after each season and have to be renewed. In 2017, US publisher Wired released a very worthwhile article on Supreme bots. That article put the purchase price for “RSVP Sniper” USD 595—and its sales at over 500.

Why pay for a product whose sole purpose it is to give you a chance to spend even more money (yes, even with a bot, the garments themselves have to paid for normally)? To get that, you have to grasp what Supreme is and the demand its products have. Supreme has employed intentional shortages and growth hacks to become the world’s largest fashion hype brand. Every Thursday, the new goods are released as a “drop” in a few brick-and-mortar shops as well as online—both of which are sold out within minutes. On a given “drop” day, the Supreme website can log up to a billion pageviews and nearly 2 million purchase attempts, according to the aforementioned Wired article.

The business revolving around Supreme has become so lucrative that it’s become a stand-alone niche, a “Sup Economy” if you will—complete with its own terminology. Players here include resellers, who systematically purchases the hottest digs and then reflip them at a major profit on online marketplaces. And then there are the Hypebeasts, the self-applied nickname of hardcore fans, who desperately want the latest Supreme duds (or those from other exclusive streetwear brands, like Bathing Ape (“Bape”) or Palace Skateboards). Some of the Hypebeasts end up as businessmen and women, buying several articles with the sole purpose of reselling duplicates at a premium, and are thus able to (at least partially) refinance the original purchase.

Bot providers are satisfying the needs of both as today resellers and fans alike are forced to resort to bots, since there is no other way for them to get their hands on the hottest items (if they are not lucky enough to live in a city where Supreme goods are available in select brick-and-mortar shops).

While some bot providers have mobile versions, the vast majority of the bots currently available are designed for desktop. And none of the mobile versions are distributed via the Apple App Store, but only through the bot-maker’s website. If you go to the App Store and search for “supreme bot,” there is only a single app to be found that promises to handle the entire process automatically: Supbot. That coupled with the fact that it only costs 20 bucks makes it an absolute steal.

App developer from his bedroom 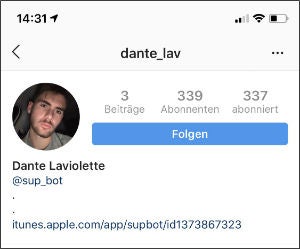 The man behind Supbot is 19-year-old Dante Laviolette from Toronto, who confirmed his role to OMR in a written interview. “I am a 19 year old from Toronto and have been programming since I was 10 years old. I originally found my passion for programming through an online game called ‘Roblox.'” Laviolette said that he learned how to code using programming language Lua, which in the game was what players used to create their own level. His passion for programming, however, had taken hold and in the subsequent years he “took Computer Science courses throughout high school which taught (him) Python and Java,” he said. And then in high school he used JAVA to create his first bot, which was for Ticketmaster; Laviolette called it a “useful experience.” Once he completed high school, his plan was to study Computer Science at the University of Toronto. But after one semester, “I decided to take a semester off school and pursue Entrepreneurship. I left school and decided that I would create a Supreme bot for iOS which would be available on the App Store.” And he felt that this idea was incredibly promising dubbing it a “Blue Ocean idea,” which is a business idea for an area that lacks significant competitors.

Putting together the finalized version of Supbot required Laviolette to “spend some time learning Swift, read books on Data-structures & Algorithms.” Then there was the problem of the strict guidelines in the App Store. “Upon initially reading their guidelines it seemed impossible to develop Supbot. It took a lot of thorough planning and abstract thinking to develop it in a way which they would allow for. Then, after some months in which he logged “100+ hour work weeks” he launched the Supbot app in the App Store this past May.

19,000 downloads thanks to the drop effect

The time and effort he put into the bot certainly seems to have been worth it. It regularly shoots up the App Store Rankings on drop days, and on special drop days, like this past September when Supreme dropped a co-collection with upscale fashion brand Comme des Garçons, Supbot hit number 1 in the USA, Canada and the UK according to Berlin app analytics tool Priori Data. In Canada and the USA, the app was the fourth and sixth most-popular app across all categories for purchasing apps. 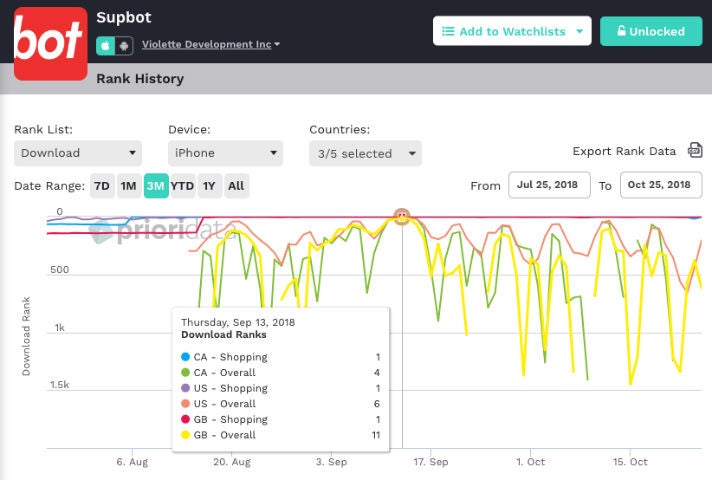 Supbot’s rank in the App Store stateside, Canada and and the UK according to Priori Data

The app is said to have been downloaded (and bought beforehand of course) some 19,900 times. 30% of revenue generated from app sales go to Apple. Priori Data estimates that Laviolette has earned over USD 280,000 with the Supbot app. 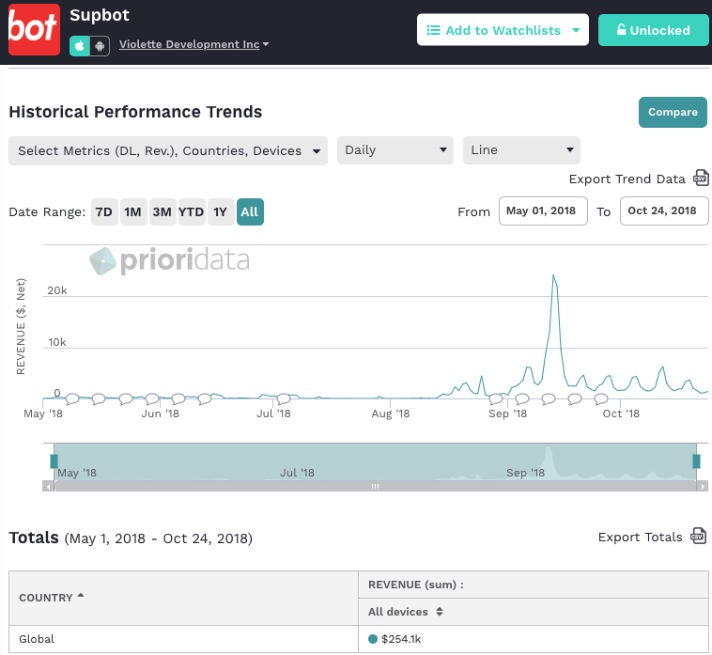 Estimates of in-store income from sales of the Supbot app (source: Priori Data)

According the estimates by stats tool Similarweb, Laviolette generated over half of his downloads via search. The other 50% of downloads come from social media, also according to Similarweb. Supbot operates an Instagram account with 8500 followers and Twitter account with 1200 followers. 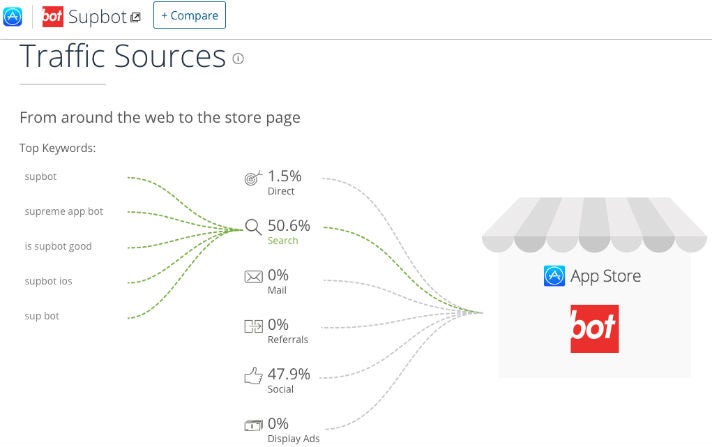 Distribution in percent of external traffic sources to the Supbot page in the App Store (source: Similarweb)

Laviolette informs his Instagram followers about upcoming drops and what’s being dropped. The images primarily come from the “Supreme Community” account, which also operates a Supreme fan app. Such posts tend to lodge likes and comments in the upper hundreds.

An even more influential factor in the success of Supbot figures to be the direct dialogue with users after the drops. Laviolette encourages his customers to send screenshots of successfully copt articles, either as a DM or by uploading them to their own accounts. Thus, the app developer is able to validate the reach of his marketing measures and prove to interested parties that his app works. He then collects the screenshots posts them as a weekly Instagram Story: (here’s an example); the weekly Stories are available as archived highlights. Laviolette then also runs paid ads on Instagram to further boost reach, as this screenshot of a Twitter user shows.

The question of legality and security?

The positive posts on social by users happy with Supbot are spliced with some from disappointed users for whom the app didn’t work. For his part, Laviolette addresses criticism directly and provides tips on recommended app settings. To the outside eye at least it would seem that Laviolette is continuously working on his bot. In less than six months, he’s released 12 updates—which given the permanent game of cat and mouse between Supreme and bot makers is necessary to ensure functionality. Whenever Supreme changes something to its website, even something as small as a change to the URL structure, and bot makers don’t catch it, the bot will hit a dead-end and no purchase will be made. Laviolette told us that he has not had any contact with Supreme and doesn’t expect to. But he doesn’t see them taking any action against him in the future either. “In my opinion, bots help build the “hype” behind the brand itself as their items sellout so quickly. In all, I feel that bots are good for Supreme and it wouldn’t be a good idea for them to put an end to them.”

Laviolette is optimistic about the position he’s in: “Apple doesn’t allow for “copy-cat” apps which means it is very unlikely they would allow another Supreme bot on the App Store.” And as such, he see his long-term future as an entrepreneur, while in the short-term he says, “I will continue to support Supbot as long as Supreme is around and I have some exciting updates coming in the next few weeks.”

Previous article:“Print is a pain in the a$§—that’s why it’s died”—Beastie Boys’ Mike D in the OMR Podcast

Further reading on this topic
PublishingTalk of the town

Beating the drop: Bots are no match for this Frankfurt skateshop

The scoop on the drop: where did the latest marketing strategy come from and how does it work?