Next article:Gimlet Media co-founder Matt Lieber—how and why podcasts are set to become a billion-dollar industry
Torben Lux & Scott Peterson

When scrolling the Apple Appstore for free shopping apps, you see the usual suspects: Amazon, Ebay, Otto & co. With pay apps, however, it is a completely different story. “TechApp for BMW,” “Autoparts for Renault” and “VAG service – Audi, Porsche, Seat, Skoda…” are among the highest-ranking apps in terms of revenue. If you look a bit closer in fact, you’ll see that of the top 200 there are more than 70 on the subject—and they are all from a handful of Russian app programmers. OMR tracked down one and talked about his business.

Clearly and succinctly, the “TechApp for BMW” description drives home what the app delivers: “The application contains technical information that will help you in the repair and maintenance of your car.” Then follows a list of categories, into which the app is subdivided: chassis, brake system, lighting lamps, etc.. Then a note that all the information contained in the app complies with the recommendations of the automaker and then, finally, a list of the dozens of models for which the app contains specific information.

The automotive reference guide for car tinkerers runs €3.49 and is available in English, German, French, Italian, Russian and Spanish—and currently ranks second among all purchased shopping apps in the Apple store. The only app ranked higher is “Supbot – Supreme Bot” (we talked to the app founder a few months ago—you can read about it here). Although the apps are listed in that category, they are not your standard, run-of-the-mill shopping apps. There are no in-app purchases or shopping functions; and no app that provides in-app purchases would charge for downloading their app. That’s not where their revenue comes from, obviously.

At first glance, you may be inclined to think that car app’s top-3 ranking is the product of chance. It has only a single review (five stars) and has been available in the app store for the past four years. The last (and only) update was carried out three years ago—with an accompanying description text that would seem to have been translated using some crude translation tool. Case in point: “The app is completely reworked. Now all data is stored on the server and for its operation need internet.” 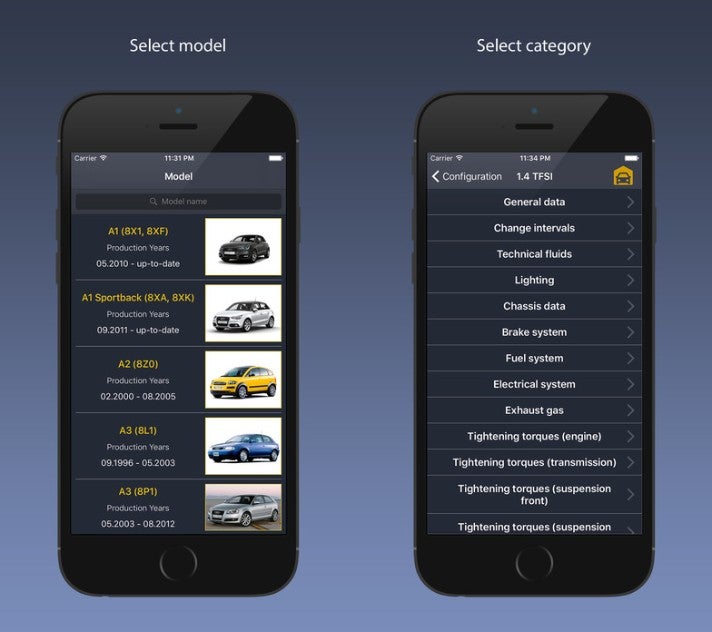 Screenshots of one of Vladimir Susoykin’s 16 auto apps (Source: techapp.org)

If you take a look at the programmer’s profile, however, it quickly becomes apparent that chance has nothing to do with it. Vladimir Susoykin not only created “TechApp für Volkswagen,” but has two more in the top-10 and an additional 13 in the Top 200. “TechApp for BMW” and “TechApp for Audi” (both top-10), apps for Honda, Ford, Skoda, just to name a few. Almost all of the apps cost €3.49 and none have more than 10 reviews.

The origin of the car app, which is now top

The solid ranking and the fact that the apps are available in the shopping category are more or less a product of chance, Vladimir Susoykin told OMR. “The idea of my applications appeared in 2014. I then had an Audi A4, which I independently serviced and repaired. It was during the transfers from the garage to the computer in the house, to find out the technical specs on what I needed. So I thought, having all the information on car maintenance collected in one place would be a good idea.”

Susoykin studied and received an MA in transportation, but almost exclusively worked in IT. So when I friend offered to teach him the basics of app building, it wasn’t a stretch and he started building his app right away. One night after work he drafted his first app. When asked why exactly his apps were ranked so highly in “shopping,” he was not able to provide any clarity. While he did invest in some app promotion campaigns, he quickly stopped after decidedly lackluster results. “The main factor in the promotion of applications, in my opinion, is the description of the application, allowing potential users to understand the idea and benefit of the application. Screenshots also play an important role to show an app’s functionality.”

40% of all apps in the shopping category are car apps

While many of Vladimir Susoykin’s apps have the top spot in Apple’s app store, he is by no means the only programmer betting on these types of app. A total of 70 similar apps are in the Top 200 for pay “Shopping”apps—that’s nearly 40% of the entire category.

With a total of 35 apps, Andrey Ivanchenko is the king, so to speak, of pay car apps. They follow the exact same MO as Vladimir Susoykin’s apps: available for a variety of car brands, cost €3.49 and, usually, only have a single review. The most popular among Ivanchenko’s is “Autoparts for Renault VW” (no.: 10) while both “Autoparts for Mercedes Benz” and “Autoparts for Audi” rank 37th and 38th respectively. 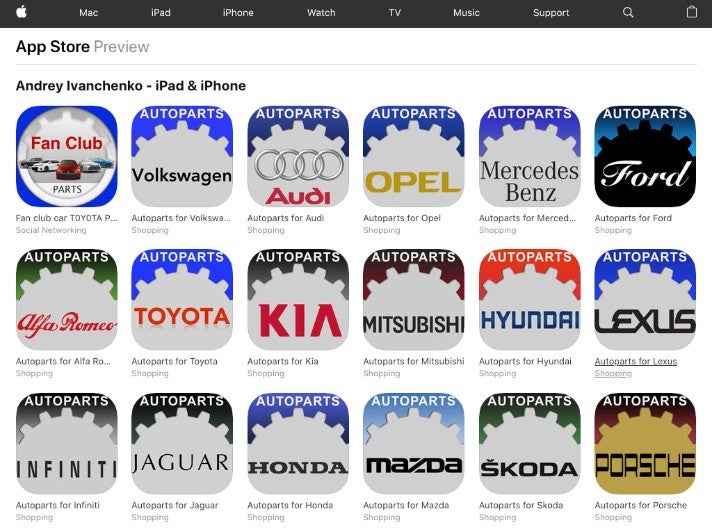 A selection of Andrey Ivanchenko’s Auto-Apps in Apple’s App Store.

No competition among friends

Susoykin doesn’t view the others as competition as they are all specialized in spare parts and he focuses on technical details. As for why almost all of the app makers are from Eastern Europe, Susoykin sees a very simple reason: “It’s not just because everyone is passionate about cars. Circumstances here are such that many people actively work on their cars so that they can repair them themselves.”

Susoykin’s apps have generated over 12,500 downloads. At an average sales price of three euro, that would translate into EUR 37,500 revenue, which, after calculating Apple’s 30 percent commission, would leave EUR 26,000. Not much, but considering we are talking about a hobby pursued exclusively in his spare time and a product with information exclusively stemming from public information taken from car manuals, not bad either. 23 percent of all downloads are from Germany, 18 percent from the USA. “The fact that these rather modest download rates are enough for a solid ranking, just goes to show how small the niche truly is,” says Susoykin.

He would appear to be right. Today, for example, “TechApp for Opel” leaped 23 places from 25 all the way to number 2. The “shopping” category and the ranking list of pay apps are not one of the heavier frequented areas in the app stores. And yet, with the sheer mass of well-placed apps with decent findability whenever relevant car keywords are used, Susoykin figures to have a nice little secondary source of income. And that is not lost on Susoykin either; he just recently quit his day job to concentrate full time on his apps.

Previous article:The answer to “the question is what is the question?” IS your lineup for OMRAS19

Further reading on this topic
Talk of the town
Roland Eisenbrand & Scott Peterson1.6.2021

Supbot: Did a Torontonian teen turnover 280K with a Supreme bot app?