In her small corner nail studio, Charissa Chioccarelli turns to Instagram for growth and bookings

When it comes to Instagram, most larger companies and brands treat it as one big gallery, where they, correctly, showcase only the very best of what they have to offer. But what about for small mom-and-pop shops around the corner? For “ISLA Berlin,” a nail studio in the German capital, Instagram is a customer-acquisition tool that generates over 50% of studio bookings and significantly impacts revenue. We spoke with founder Charissa Chioccarelli about booking appointments via personal messages, boosting growth via hype and flame-painted nails.

“There are a lot of basic nail salons in Berlin, but when we started no one was offering nail art,” Charissa Chioccarelli tells OMR. Originally from the Netherlands but a resident of Berlin for the past four years, she’s operated her ISLA Berlin nail studio for the past two years. At ISLA Berlin, she offers standard variety manicures, but her specialty is nail art. As the name implies, nail art goes beyond regular nail polish and entails artistic flair; the trend is just now arriving in Germany. “I wanted to combine a new kind of nail salon with fashion to create a community space for women,” says Chioccarelli.

The biggest challenge initially, she says, was finding a nail designer with sufficient artistic talent to make works of art on her clientele’s nails. Eventually, she was able to convince an artist from the UK to relocate to Berlin for the project; now she trains the next generation of nail designers at ISLA. “We started the nail art trend in Berlin. Now other nail studios are trying it too. Which I believe is a good thing because in the end, it only helps us if nail art gets more popular,” says Chioccarelli. “There are two groups of nail customers. The first one is inspired by the nail art we show on Instagram and wants to give it a try. The second one knows nail art already and comes for the nail technicians.” Chioccarelli says that in the beginning many of the newbies were content with flames on nails—now their demands are frequently much more complex.

Before she moved to Berlin four years ago, Chioccarelli worked at Zalando where she helped build up the influencer marketing department. As she soon found out, it was an excellent place to learn about the inner workings of Instagram, influencers and their communities. When she opened her nail studio, her background fashion inspired her to go beyond just nails and to sell clothes out of the front half of her shop. The way Chioccarelli sees it, there are numerous hip streetwear shops for men, but women, however, typically have to resort to large chains.

🚫🧢 Only 1 jumper left 🤑 get your hands on it now! www.ISLAberlin.com

While the majority of her revenue is derived from nails, the fashion vertical plays an important role in the future development of the online business. The strategy here is to build the brand in the brick-and-mortar shop and on Instagram, and then to accelerate growth in the future via the online shop. “We more than doubled our revenue from 2018 to 2019 and are fully booked every day at the moment,” says Chioccarelli. “We hope to outgrow the store with our online shop in the coming years.” ISLA Berlin fashion is young, gaudy and more for a night out clubbing than for afternoon tea with grams.

Piggybacking off the hype for growth 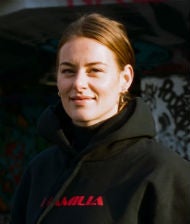 And the clientele that fills her studio? “The majority of customers already know ISLA coming in – mostly through Instagram, Influencers, press,” says Chioccarelli. She says that everything the brand does starts with an online focus and that Instagram was the perfect platform for the products in her shop. “Being authentic helped us grow on Instagram. It also helped that ‘nails’ is a trending topic on the platform.” If you take a closer look at the hashtags ISLA Berlin uses in every post, you can see just how big nails are at present. On Instagram at the moment, there are over 16 million posts to #instanails, 17 million to #gelnails, while #nails has 124 million.

ISLA Berlin currently has 23K followers–up from fewer than 8K in early 2019. According to InfluencerDB, 86% of all followers are female. “Our community is pretty young, between 15-30 years old. But it’s mainly the women between 22-30 that spend the most money at ISLA,” says Chioccarelli. Typical posts entail images of flamboyant nail designs and clothing for sale in the store. Engagement on the bulk of the posts is modest (followers are young and are crazy about stories). Then there are several posts that generate 10,000+ likes. The biggest engagement driver currently appears to be tooth jewelry.

Just how important the role is that Instagram plays in the success of the business is evinced by a few statistics. “8 of 10 customers we have come through Instagram,” says Chioccarelli. “50 percent of the bookings are made through direct messages on Instagram. That’s great because in a chat we can check what treatment the customer really needs.” She says that she offered the booking features on Instagram, because she wanted to be right where her community is—but that she was quite surprised that it would become the primary booking channel. In addition to Instagram, bookings can be made via the ISLA website, Treatwell and right in the shop. The close proximity to the community that Instagram provides enables ISLA Berlin to quickly fill any slots that open up last minute—e.g. a story with not much more than the open time slot and a CTA to send a direct message to book.

While the community is primarily on Instagram, Chioccarelli hopes to turn her store into a place where women do more than shop and get their nails done. “We are not only a shop, we are their friends,” she says. Events are held regularly in her store, some of which are held in cooperation with large brands who are fans of ISLA Berlin’s focus on creating a community. “We already had events with brands like Nike, Namilia or Obey,” says the Dutch founder. She says that the next goal is to create awareness for the shop beyond the borders of Berlin. “We grow the brand with pop-ups in different cities. The plan is to have a second store in another city in the near future,” says Chioccarelli.

54% of the current ISLA Berlin followers on Instagram are German, 12% from the US and about 10 from the UK. While establishing itself internationally could be bolstered through collabs with influencers, ISLA is holding off on such measures for the time being. Although the studio is in close connection with a handful of hip Berlin-based influencers, Chioccarelli is not yet ready to engage in any large-scale campaigns with brand ambassadors.