Can word-of-mouth marketing ever work at scale?

For brands and event organizers, there is hardly a more valuable marketing instrument than actual fans spreading the word about products and events. The question has never been about its obvious benefits (free publicity and increased trust), but about its viability as a scalable tool—and whether it could ever become its own stand-alone marketing channel. Tools like Hypd (formerly Ticketrunner) and Verve are working to do just that via incentivized ambassador programs that reward the most loyal and most active fans.

“When we sold Neonsplash in 2015, we knew that our next project had to pursue a business focussed on the “ambassador” concept,” says Ticketrunner founder Florian Eckelmann to OMR (Eckelmann is now in the process of renaming the company to Hypd). Along with three other German entrepreneurs, Siamak Ghofrani, Matthew Mockridge and David Zimek, Ecklemann founded “Neonsplash” in 2011, which was as an event series where at “electro parties partygoers spray each other with neon colors,” he says. 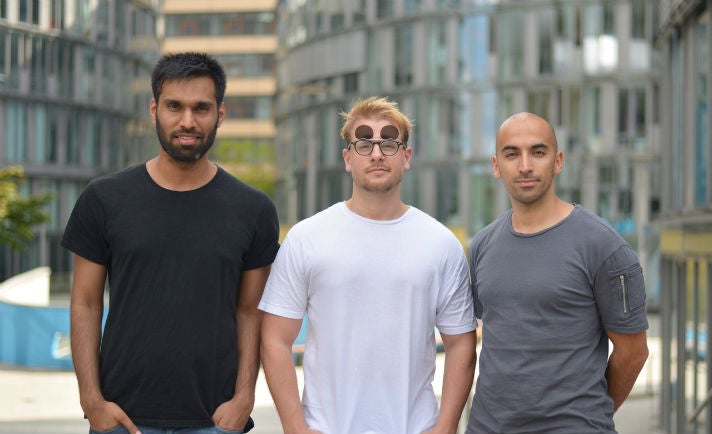 “By 2013 we had 150 shows in 16 countries. Our goal at the time was to become the Google of paint parties and needed to internationalize as quickly as possible. However, we didn’t know much about the international markets at the time, but we still wanted to jumpstart ticket sales asap. So we approached our first ticket vendors and turned them into ambassadors and sellers at their colleges,” Eckelmann recalls. This ambassador idea crystallized into what is now Hypd in 2016, which Eckelmann now runs with Farooq Haider and Siamak Ghofrani.

Schalke has a go

Hypd works like this: after creating an account, event organizers can integrate Hypd into existing ticketing systems, like Eventbrite. They can then use the tool’s dashboard to launch a variety of campaigns, send out invites to fans via email or social to take part in a given event as an ambassador and can define the incentives for successful ticket sellers. Hypd is focussed on transforming fans into ambassadors via highly attractive incentives. Eckelmann told OMR that from a marketing perspective, finding the right balance between performance and appreciation is essential when it comes to deciding on an incentive.

One very successful incentive was for the Q-Base Festival, where ambassadors who reached a certain threshold of sold tickets were given a limited-edition college letterman’s jacket. Eckelmann said that people were approached regularly about where they could get the jacket. German soccer giants Schalke 04 have also worked with Hypd, incentivizing ambassador efforts with a home jersey signed by the entire team. Ambassadors acquire such incentives in a manner similar to winning prizes at a local carnival: earning a certain amount of points for a given sale and then redeeming them in the shop for the whichever reward they choose. A host of additional event organizers include the Amsterdam Music Festival, the New Horizons Festival or one of Germany’s top clubs Bootshaus. 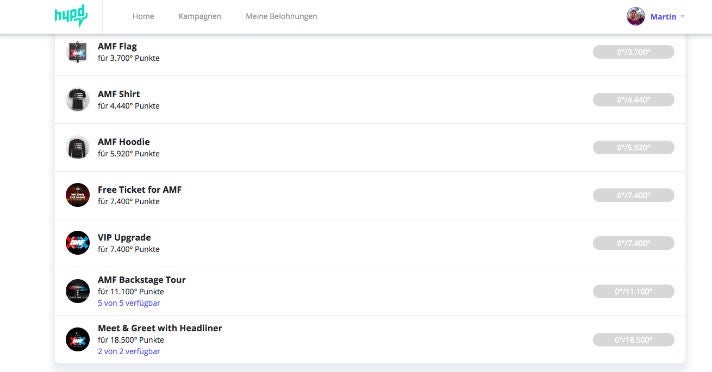 Now Eckelmann is setting his sights on acquiring clients beyond event organizers. He told OMR that Hypd is already in advanced talks with brands from the electronics and fashion sectors. “We could envision ambassadors recommending individual products or articles, for which they could earn product points to redeem for incentives,” says Eckelmann. Even if events seem to be the most promising area for employing the incentive model successfully, there is potential to expand it to other sectors.

At present, there are over 25,000 registered ambassadors on Hypd who can choose from a variety of bonus programs. “We also have an eye on the more-established traditional affiliate publishers, but our focus lies on real fans and multipliers,” says Eckelmann. Because of that prioritization, Eckelmann doesn’t see his company as a traditional affiliate business. “A campaign with 20 ambassadors tends to be more successful than one with 200. It’s not a rarity when a single person sells more than 150 tickets to their friends and acquaintances. You could call it nano influencer marketing.” In contrast to typical affiliates, Hypd ambassadors aren’t leveraging any blog traffic or large social followings. “The majority of ticket sales are made on messenger tools like Whatsapp and Facebook Messenger,” says Eckelmann. 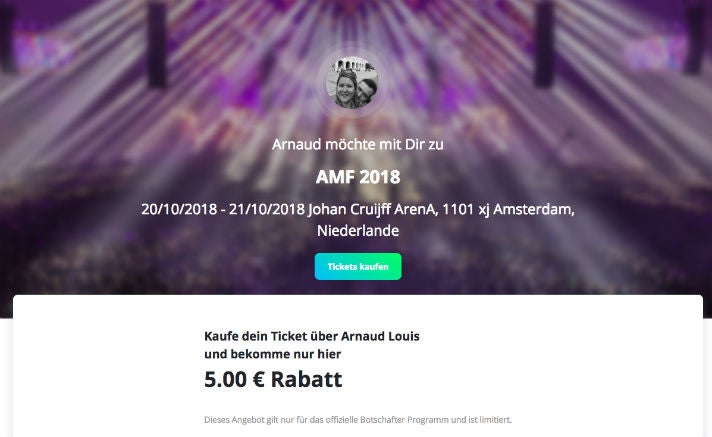 Ambassadors sell tickets at a discount.

According to Eckelmann, the promotional effects depend on the campaign’s duration, but he sees an average uplift of five to twenty percent from ambassadors. The CPM is reduced by 75% and the conversions are up to 400% higher than with standard ad formats. The pricing scheme for brands and event organizers is a combination of monthly subscription fees and sales-based commissions: EUR 119 per month plus a 10% sales commission will get you 50 ambassadors; 150 ambassadors cost EUR 299 with a 7.5% commission and for EUR 799 a month and a 5% commission you can have 450 ambassadors. There is also an enterprise solution offering businesses individualized conditions. At the moment, Hypd employs 15 employees and generates revenue in the 5 figures.

Hypd is not alone with its idea of scaling the ambassador model: UK-based Verve has had even more luck in gaining investors. With a similar business model, it places a greater focus on white-label solutions for festival and event websites. Founded by brothers Callum and Liam Negus-Fancey, they have already collected USD 30 million in capital according to this crunchbase article. According to its own figures, Verve currently has 450 clients and sells 500,000 tickets worldwide. With Verve solely focussed on festival and concert organizers, it would appear to be left up to Hypd to show whether or not word of mouth is viable at scale in other sectors.