Thanks to review marketing and a thriving community, Waterdrop is set to crack 80M in revenue—and ready to take on "Big Water."

Waterdrop is taking on “big water” and soft-drink producers with aroma cubes. Founded in 2015 in Vienna, the start-up is now active in 13 countries and projecting revenue this year to approach 9 figures. OMR spoke to Waterdrop founder Martin Murray about the insights gained from its pop-up-store beginnings, the advantages of being a D2C company and how the Waterdrop community has been a catalyst for growth.

On average, Europeans drink roughly 115 liters of pre-packaged water per year, or approximately the same amount of water that a medium-sized aquarium holds. Simultaneously, the consumption of soft drinks has reached an all-time high in Europe with the average person shelling out about €250 per year for their bubbly beverages.

Waterdrop is an Austrian startup with a two-tiered mission: reducing the consumption of plastic bottles and avoiding unnecessarily long shipping routes. “It’s pointless to load up trucks with bottles of water and ship them thousands of kilometers,” says founder Martin Murray. So, Waterdrop produces and sells sugar-free cubes made from fruit and plant extracts that dissolve in water. The cubes not only impart flavor, but also add vitamins to tap water. The health-conscious aspect coincides with another aspect of Waterdrop’s mission: to achieve a reduction in consumption of pre-bottled water and sugary soft drinks among customers.

The future of beverage retail is online

Murray got his start as a consultant at Boston Consulting Group. While the majority of his consulting cronies took an active interest in tech and crypto-endeavors, Murray was fascinated by an industry that seemed dull on the surface: beverages. As Murray tells it, the beverage industry has not really seen any major innovations since it adopted screw caps. That was half a century ago. And you won’t find any innovation in the where, either, as the primary point of sale has stayed the same, as consumers continue to purchase the bulk of drinks at supermarkets or corner shops.

A dinosaur industry, averse to change is ripe for disruption. So in 2015, Murray founds Waterdrop. His goal is to create an online business, direct to consumer, skipping over expensive middlemen and women—both of which are practically unheard of in the beverage industry. In addition to the fact that no one buys drinks online, the standard plastic and glass bottles that major beverage producers use, are subject to a long and convoluted process of logistics. With aroma cubes that consumers can dissolve in standard tap water, it’s a different story. “Aromatic cubes are an excellent match for online shops: they’re small, easy to transport and have high margins,” says Murray.

In late 2016, Murray opens his first pop-up store on Vienna’s Mariahilferstraße street, Austria’s largest shopping boulevard. Shelves are stocked with bright-colored packaging and a diverse array of cubes in all manner of flavors. Hundreds of people enter the shop daily and provide Murray with essential feedback. 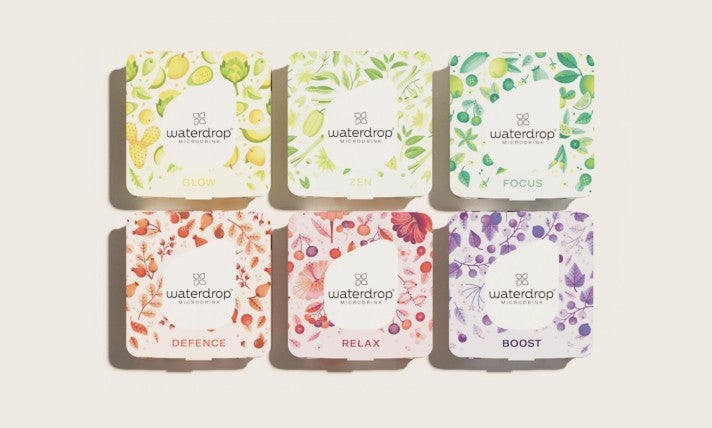 “Two months after we opened, we made wholesale changes to the product,” he says. The packaging did not fit inside mailbox slots, it was too sweet and too many cubes in taster packs. When the pop-up re-opened, tasters contained 12 cubes instead of 48 and joining the product range was Waterdrop’s first non-foodstuff product: glass bottles, sized for the perfect cube-to-water mix.

Revenue and data from the online shop

The Waterdrop online shop launches in early 2017 and today it is by far the most profitable sales channel. Of the stated revenue target for 2021, 90% of the USD 80 to 100 million in revenue will stem from the online shop. Roughly 150,000 customers visit the shop monthly and spend an average of EUR 35 per person. In addition to cubes and bottles, the shop sells powdered teas. The far and away best-seller, however, is the taster pack. Murray says that most customers eventually decide on their 2 or 3 favorite flavors (there are now 18 in total) and buy those repeatedly. He also says that about half of all first-time customers return.

One of the main advantages Murray has on the legacy players stems directly from Waterdrop’s D2C business model: “We are in possession of crucial data that you can only collect when in direct contact with your clientele,” says Murray. Preferred flavors or the amount of water an individual customer consumes, for example. “We track everything about their consumption and purchasing habits,” he says. The rich spate of data has allowed them to identify differences in purchasing habits between countries: “A best-seller in the states, could be a flop in Germany,” says Murray.

About 10% of Waterdrop’s business model is non-D2C, which stems from sales in the approx. 8000 drug stores that carry Waterdrop products, from deliveries to business clients and a small portion from brick-and-mortar shops, of which there are 15 globally.

And where exactly do those customers come from? Some new customers are acquired through TV ads, social media and influencer marketing, but the lion’s share stem from Facebook and Instagram according to Murray. On Instagram, Waterdrop has 400K followers, while the company Facebook page has 350K.

“The biggest reach lever we have are our paid co-ops with influencers—from small-scale to top-level,” says Murray. When Waterdrop expands to a new market, in which Waterdrop and its products are relatively to totally unknown, Murray says that influencer marketing campaigns play a decisive role. “Annually, our spend on influencer co-ops is in the upper 6-figure range.”

One of the biggest lessons that Waterdrop had from its time as a pop-up store was the value of customer feedback—something it continues to prioritize in its current iteration with an all-encompassing feedback system. To this end, the Austrians have focussed on cultivating their own community, which currently is 150K strong and is primarily organized via local Facebook groups. Here, members receive activity points, e.g. for every purchase made or every time they complete a survey. Members then receive preferential treatment on limited edition and can test out new products. “The community is the perfect exchange tool,” says Murray. And one that is profitable: Group members tend to buy 3-4 times more often than regular customers.

Non-members also have a chance to review Waterdrop products and leave their feedback with the integrated feedback tool in the online shop. Here, product reviews are compiled and published in real-time; 300,000 reviews have been collected thus far. According to Murray, the reviews have led to crucial insights, including the need for an app. Without it, it’s unclear if (or when) they would have released it. The Waterdrop hydration app dropped last July and lets users report their water drinking habits. Reporting by Airnow Data puts the number of app downloads at 24K in just over a month.

In contrast to the US, where powder drinks are well established in the mainstream, the “microdrinks” market, as Waterdrop self-identifies, has “a lot of untapped potential,” says Murray. As a result of the mass appeal stateside, Waterdrop opened up a flagship store 6 months ago in Miami. It may sound counter-intuitive, but Murray would love to see more competition in Europe. “It would help boost visibility for the product category and then led to an increase in ad spend,” he says.

Be that as it may, Waterdrop recently absorbed one of its potential competitors: acquiring fellow Vienna startup Purgaty, whose filter technology purifies water bottled water, rendering it potable. In conjunction, the Waterdrop cubes are then to be used to add flavor to the newly purified water. Waterdrop has become on of the largest purchasers in Europe of re-usable drinking bottles. With the acquisition of Purgaty, Waterdrop hopes to move beyond its young, female target audience and reach athletes and fans of the outdoors.