The secondhand market is poised to reach a total volume of USD 51 billion. In our home market of Germany, Zalando and About You just launched platforms dedicated to selling used threads. While those are the household names, the market leaders in the Fatherland with a total of 8.5 million users are Kleiderkreisel and Mamikreisel. The Lithuanian parent company is now undertaking a risky move: eliminating the two market leaders step by step and merging its users in the mother Vinted app. We spoke to CEO Thomas Plantenga about the strategy, and he told us about the potential payoff: establishing a new dominant brand in Germany and the next European unicorn.

If you’ve been looking for second-hand wares in Germany, the first port of call is not Vinted like in the majority of other European countries. Instead, you’d typically start your search on Kleiderkreisel or Mamikreisel. Its 8.5 million users are primarily female and open up their closets to sell used clothes, either for themselves (Kleiderkreisel) or their children (Mamikreisel). Both, however, are subsidiaries of Lithuania’s Vinted, which was founded in 2008 by Milda Mitkuke and Justas Janauskas. Currently, Vinted has some 34 million “Vinties” on the app worldwide and is active in 12 markets, 11 in Europe and the USA.

While Vinted enjoyed a run of modest success after launching in 2008, a change to its business model in 2016 propelled the company towards profitability and it truly solidified its unicorn status in late 2019 by amassing over EUR 128 in capital from seed funding. Investors in this round included venture capitalists such as Insight Partners, Burda Principal Investments and Accel. With that funding in the bank, Vinted is ready to consolidate its biggest market, Germany. “If you look at it from a brand perspective it’s suicide,” CEO Thomas Plantenga tells OMR. But if you take a closer look at Vinted’s rise, it quickly becomes clear that the Dutchman has a proven track record of maximizing the potential in a given business model.

Success comes from the top

When Plantenga came on board in 2016, Vinted was on the brink. “The business was completely burning down,” he told Techcrunch in 2018. He quickly drafted and enacted “a very aggressive plan of how to completely change things and really change the direction.” Plantenga laid off half of the 240 members of staff, shuttered offices in San Francisco, London, Munich and Paris. The most radical change, however, was to discontinue charging commission on sales, which, up to that point, had been responsible for the bulk of Vinted’s revenue. 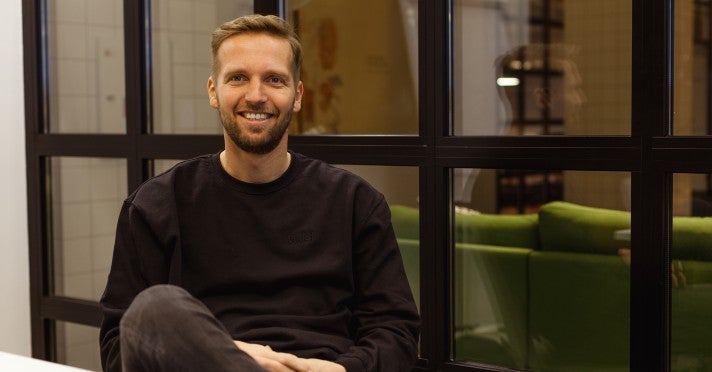 Since Plantenga took the helm, Vinted says it has seen the company grow two-and-a-half fold per year. In 2019, the platform’s global revenue of gross goods, the amount of money that Vinties made selling used clothing on the platform, eclipsed EUR 1.3b. Vinted does not disclose revenue figures. In 2018, net revenue increased to EUR 32.9m, but the net loss rose to EUR 42.9 mainly due to rising marketing costs. If the company truly did increase growth by 2.5 fold in 2019 and 2020, revenue would be somewhere north of EUR 200m. The international workforce consists of over 500.

No commission, no problem

The question on everyone’s mind since scrapping the key revenue generator: How does Vinted make money without charging a commission? The business model currently entails three separate revenue pillars: visibility boosts, ads and buyer protection. The first is akin to Craig’s list or Ebay Kleinanzeigen. Sellers can opt to boost the visibility of what they’re selling for a fee, and thus have their offering vaulted back to the top of the list. Second, there are ad placements within the Vinted app and on websites. But the company’s current focus is primarily on a variety of buyer protection features.

Vinted CEO Plantenga plainly told OMR that one of the main goals with the new app is to drive more people to using these features: “Because of the older apps, a lot of people in Germany are not using our transactional system. With that people trade safer and are protected from scams,” he says. “We are starting with subsidizing shipping to motivate users to use our transactional tool.” For a fixed fee of 70 cents plus 5% of the sales price, Vinted processes payment and tracks the package. The costs are born by the purchaser.

One brand, one experience

When users start to migrate to these functions in the new app, Vinted’s revenue increases. But there are additional reasons for merging Kleider and Mamikreisel. “When you bring communities together, that overlap, both communities are more engaged,” Plantenga says. “That brings more value for everyone. The more people there are, the faster people are selling.” And when activity on Vinted increases, the marketplace stands to profit considerably in the long term.

On Vinted, Kleider- and Mamikreisel young women primarily sell to other young women.

“In the first wave we accepted losses, closed down our services, just to be safe,” says Plantenga. He says that a merged Vinted also helps new users find the products they are searching for faster, which in turn increases engagement on the platform. “In the past months, Vinted has merged its brands for children’s and adult clothing in Belgium, Spain and the Netherlands. The data we received from the smaller markets emboldened us to make the same move in our second-largest market (after France).

Can the merger succeed?

“We have two objectives: We want the users to have a better experience and we want to get most of the users into the new app,” Plantenga says. He says that while he expects some degree of churn, user friendliness and long-term potential trump all other risks. That is by no means a given. Step by step Plantenga wants to funnel each of the 8.5 million German users into the newly minted Vinted app; The entire process is to be completed by the end of the year. “We try to be super transparent. We are sending out communication of what’s going to happen and why. Users also get information in the app,” he says.

Migrating the account information in the new app is not the issue, rather the millions of products, messages, reviews and favorited items each need to be moved as well—the potential for error is immense. “We already used the migration tools in other markets and are sure there is a smooth flow of information from the old app to the new one,” Plantenga says. “In the latest testing in Lithuania, most active users are directly switching app.” Plantenga says that things are a bit more complicated with regard to marketing. New customer acquisition continues to run on the Kleiderkreisel and Mamikreisel apps, but those too will be migrated shortly as well.

The competition heats up

The bold move comes right as things are heating up on the second-hand market. In Germany, two massive players in Zalando and About You have launched their respective second-hand products; with “Second Love” by About You just hitting the market a few days ago. Plantenga takes the competition with a grain of salt, saying, “I think that all the players in the second hand market are creating that new market together. I don’t see any cannibalizing effects.” “Zalando and others are trying this to boost sales of their new fashion items. I don’t see them a direct competition.” And he’s right: the business models and focus of the About You and Zalando products are different, with neither of them offering a C2C platform, but rather selling used items that they have acquired themselves via their respective online shop.

One of the biggest questions that remain is how Vinted plans on continuing to differentiate itself from the competition, like Ebay Kleinanzeigen in the Fatherland or Depop stateside (Check out our OMR portrait on Depop here). Plantenga says that they have already launched a “Home” category, where Vinties can purchase pillow covers and linens on Vinted. While additional product categories will be added moving forward, Plantenga intends to keep it from becoming an “everything marketplace.” “Fashion and lifestyle will be in the center of our business in the future. We still see great opportunities especially regarding sneakers and higher-priced items,” he says. “The market as a whole is gigantic. We are one percent of what we could be.”

Platforms like StockX have already established themselves in the luxury streetwear and sneaker segment, where one of the keys to success is the trust that the expensive products are authentic. To establish the requisite trust, StockX runs several warehouse around the globe, where the items sold are inspected for authenticity. It remains to be seen if Vinted is willing or able to make such hefty investments, but Plantenga stresses that the current capital reserves and growth prospects are sufficient to warrant the planned expansions, saying, “If we see a great opportunity in the coming 6 to 9 months, we will raise money.”