Creating a fashion empire from the confines of your own bedroom—That’s the promise British second-hand marketplace Depop uses to acquire new users. Quite successfully apparently: with more than 10 million users signed up on the platform according to company figures. The most successful among them have followers numbering in the 6 to 7-figure range, generate six figures in annual revenues and have established their own brand. OMR dove deep into Depop universe, analyzed one of the biggest sellers on the platform to explain the mechanisms driving the platform.

“Myspace famous” is printed loudly across a t-shirt worn by Bella McFadden (better known as “Internet Girl”) in a January 2016 Instagram post. If you were around to experience the heyday of Myspace and were to now scroll through McFadden’s Instagram posts or her second-hand offers on the Depop app, you would be forgiven for thinking that MySpace never went away. McFadden wears a slew of second-hand clothing and accessories, all of which are very emo in appearance and evoke a barrage of names long since swept from our consciousness like Suicide Girls, Hot Topic, Gothic and Nu Metal. It’s all incredibly early Aughts. What was in 15, 20, 25 years ago, is making a fashion comeback thanks to the latest retro trend. 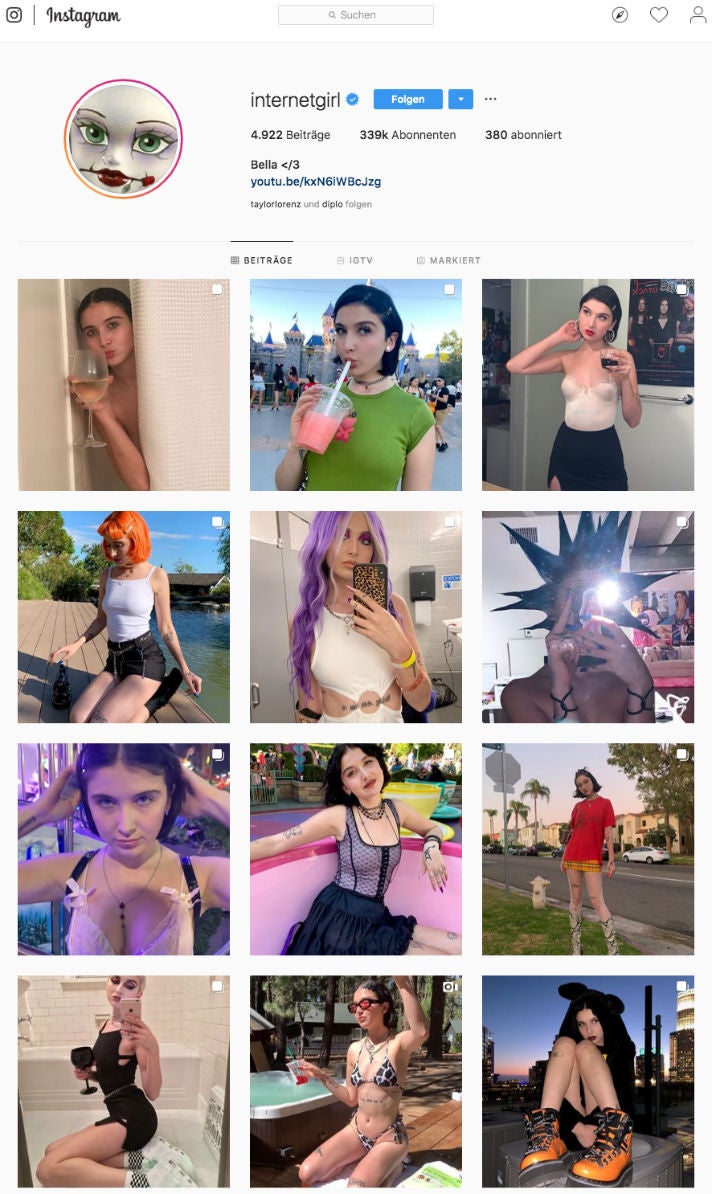 Vintage hustler since her teenage years

The articles that McFadden sells typically stem from thrift stores, shops that typically donate a portion of proceeds generated from second-hand goods to charities. She typically goes shopping with her boyfriend and told Vogue that “We’ll through an entire thrift store, then it comes to the end, and then we’ll head to the furniture section and we’ll go through every single thing that we’ve selected and make sure it works.

McFadden is 23 years old. When the fashion that she sells today was initially “in” she was just a child. In another interview, she said that she has bought and sold vintage fashion since she was 17. Since 2012, she’s run her own YouTube channel called “Internet Girl.” Thanks to Tumblr and an obscure short film, she first gained some notoriety in 2015 under that name. A few years later, after leaving college due to a psychological condition, she started selling second-hand goods on Depop.

150 bucks for a custom outfit

Before Instagram announced plans to integrate a shopping function, Depop already had the reputation of being “Instagram of Shopping.” Users can follow other users, leave comments and like other articles, but buy and sell items and leave reviews of other users. The app was launched in 2011 as an offshoot of lifestyle magazine PIG (“People in Groove”). Today, Depop’s own internal figures count over 10 million users; a New York Magazine article from this past August put that figure at 15 million. User growth is apparently driven primarily by the community and retro trends.

Isabella McFadden’s instinct for such trends has propelled her to one of the most well known “Depop influencers.” Today, she has approximately 578,000 followers on the platform; she has generated some 23,000 sales to this point. “Bundles” are one of her bestsellers, where she sells entire outfits for USD 150. Buyers merely need to send McFadden their desired size and style, which can range from “90’s Grunge meets baddie,” “Glam Pixie Nymph,” “CEO Goth Freak” to”Y2K Streetwear Weirdo.” 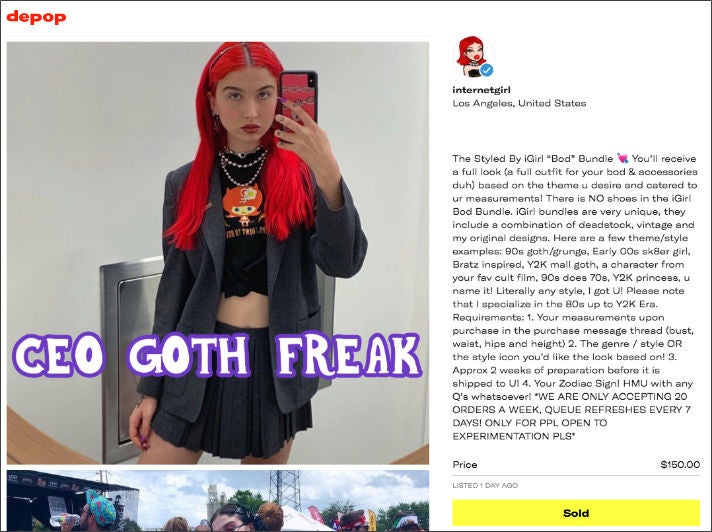 Internet Girl launches her own brand

She limits the number of bundles available for purchase on Depop to 20 per week she says; after they are gone, the offer is pulled from the platform. Her curated outfits have helped her generate a good deal of publicity with a host of other YouTubers recording Unboxing videos of bundles; with several of them generating views in the upper 5-figures.

McFadden has since become so well-known that she has launched her own label under her pseudonym, where she sells accessories on a dedicated website. “My income is in the six figures,” she told New York magazine The Cut in August, without providing any additional information in which span she generated the income. At the Noah Conference in Berlin in November of 2018, a Depop manager said that the most successful seller on the platform generated 300K in revenue, but did not mention the currency nor the seller’s name.

Second-hand streetwear for EUR 79,000 in profit

McFadden’s success is by no means an isolated instance on the platform. Californian Nikole Edwards runs the “Cyberspaceshop” on Depop, where she sells jewelry and accessories in a “rave” look for between USD 12 and 40. 125,000 users follow her account and she has lodged nearly 32,000 sales. If you assume an average sale price of USD 20 then that would put Edward’s totals at USD 640,000. And the margins on jewelry could possibly be a good deal more attractive than on secondhand wares.

From Bristol UK student Oliver Purnell operates “Oliver’s Archive” and sells secondhand articles on Depop of Streetwear labels like Supreme and Palace as well as established luxury brands. He has 81,000 followers and Depop puts sales on his account at 2100. In June of 2018 the then 19-year-old Brit told Vice, that he made GBP 294,000 in revenue the previous year (currently approximately EUR 330,000) and GBP 70,000 in profit (roughly EUR 79,000) on Depop.

Chiara Ferragni has shares in Depop

In addition to “native Depop influencers,” there are a host of celebrities who sell goods on the platform. US Youtuber Tana Mongeau (who apparently was not always the most reliable sender at first), US musician Madison Beer and British actress Maisie Williams (primarily known for her role as Arya Stark in Game of Thrones) donates proceeds from sales to charitable organizations. Italian super influencer Chiara Ferragni was the first official Depop “ambassador,” has 1.8 million followers on the platform and owns shares in the company according to founder Simon Beckerman.

After such big names, there are scores of smaller sellers active on the app who generate monthly revenues in the thousands: Brit Thidarat Kaha, for example, who the Guardian says makes about GBP 6000 a month and has 44,000 followers. The platform has apparently also attracted the first wave of drop shippers, who after making a sale order the goods from China and ship the goods to users from there directly. For every purchase, Depop collects 10% of the sales price in commission; then there is the ca. 2.5 percent fee for using Paypal for business purposes.

Room for improvement in Germany

In our home market of Germany, Depop continues to be a niche player. Berlin-based app analytics tool Priori Data estimates that the app has only been downloaded 244,000 times thus far, lagging far behind another second-hand fashion app “Vinted” and its (according to Priori estimates) 6.7 million downloads.

Paula Louise Lange is quite possibly the German seller with the most followers on the platform (15,000). The 25-year-old primarily sells jewelry on the platform under the name “louisenkind”, as well as the occasional clothing item. She told OMR that her income is not enough to live off of alone; she has made 192 sales since she joined the platform in 2018. 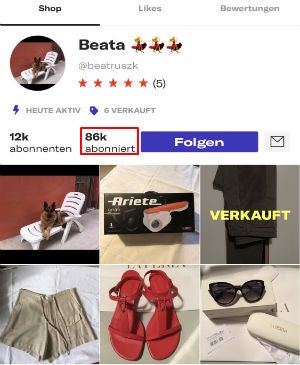 A Depop seller who has 86,000 followers (edited Screenshot)

Growth tips in the Reddit Depop forum have helped her amass followers, explains Lange. If you browse through the Depop subreddit, you’ll find a host of suggestions that people accustomed to the workings of social media platforms will recognize: like following as many people as possible. “I only follow users who seem to me as if they would buy something that I sell,” says Lange. How a corresponding Google search shows, there are bots on Depop, just like on Instagram, which automatically follow other users for merchants. They run between USD 15 per month and GBP 75 a year.

Because sellers can see which users have viewed their articles many Depop sellers try to acquire clients via direct messages: “Many people write users who have viewed but not purchased anything. More or less saying, “Why didn’t you buy anything?” I find that incredibly annoying,” says Lange.

An additional “Growth Hack” is to change the location of the place where the article is placed from. “Then the articles are shown to different users who are not necessarily from Germany,” says Lange. “But I am sure add in the article description and my account profile that I send from Berlin. This method has helped me generate a few sales.”

The question of whether Lange will be able to reach more prospective clients from Germany will depend on how Depop fares versus Vinted. On the international market, Depop not only needs to outperform Vinted, but also other substantially backed platforms Poshmark, Thredup, StockX, Grailed and (given the shopping function recently announced) possibly even Instagram itself. They are all fighting for a share of the global resale market. Thredup is projecting that the market will more than double to an excess of USD 50 billion in the next five years.

It’s not as if the situation for Depop is completely hopeless. In three rounds of funding sofar, the company has collected a total of USD 105.6 million; The last round in June 2019 netted them USD 62 million. While there is no official valuation of Depop known, it would be a massive shock if it weren’t considerable above the half a billion mark.