100,000 subscribers in four months: Father and son react to albums and Youtube can’t get enough

Despite going against common marketing "rules," turning the tables has paid promotions in place and over 1400 patrons

Taste is per sè subjective. Personal experiences interwoven into the fabric of who we are and what we like. No where is this more true than when it comes to music—especially when two generations start talking about “their” music. What happens if you keep an open mind, however, is on full display on Youtube channel “turning the tables.” The channel is nothing more (and nothing less) than son Conner going through his favorite albums track for track with his pops Kevin and getting his reaction. Four months after uploading their first video, they’ve amassed over 100k subscribers and the pair are monetizing the channel on Patreon and through ad partnerships. Today, we’re breaking down the format’s recipe for success, the role hip-hop heavyweights have played in the channel’s rapid rise and how their business model could be music to everyone’s ear.

“Welcome back ladies and gentlemen, here again today with my father.” With those words or a variation thereof, Connor opens up each an every video on “turning the tables,” before introducing his father, Kevin. In fact, only the very first clip they uploaded in mid-June was decidedly different. And even then, they keep the details about themselves to a bare minimum: Connor is the son, Kevin is the dad, who reacts to the tunes. If you go off their accents—and the comments in reference thereof—they are Canadian and both have created a growing and thriving fan community just four months after launch.

On June 18, Connor and Kevin upload the first video to their Youtube channel, which had only been setup a few weeks prior. The featured album? The 2016, and most-recent, album by British band Radiohead entitled “A Moon Shaped Pool.” Clocking in at 22 minutes, it’s shorter than the other “turning the tables” vids and leaves a lot to be desired in sound and picture quality; in the video description, Connor and Kevin do promise to ramp up the overall quality saying it’s “just a draft video to get the ball rolling.” Despite the lack of polish, the pair landed immediately on their final concept—at least one that has not changed so far. Conner steers the videos, briefly introducing the bands and/or artists and goes through the albums track for track. While they are listening, Kevin reacts in real-time to what he’s hearing and then describes how the music strikes him, what he likes and what’s surprised him.

First comes rock and then the fans roll in—with rap

The next three videos also feature Connor and Kevin going deep on Radiohead albums, (Kid A, OK Computer and In Rainbows) and stick with rock until late July, unpacking Lateralus by prog-metal band Tool and singer-songwriter John Misty. True to their word, the production quality increases with each passing video—as does the duo’s on-camera presence. By this time, the format is starting to attract a following. According to the social analytics tool Socialblade, turning the table had roundabout 8000 subscribers and 180,000 impressions by late August. 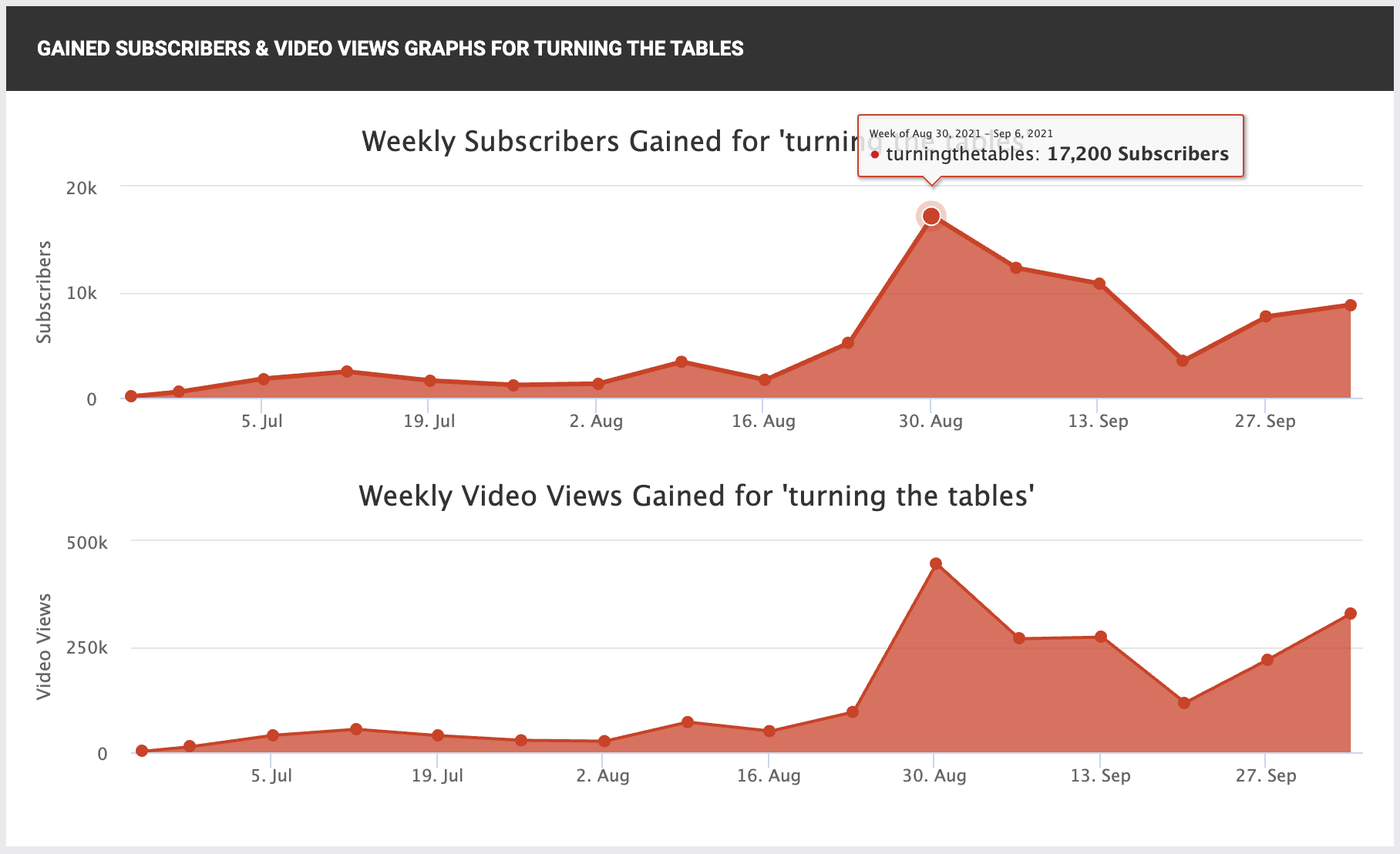 It’s the burgeoning community that makes a request to switch things up and have Kevin react to some hip-hop records. Kendrick Lamar’s 2015 Grammy-winning album “To Pimp a Butterfly” is first up and split into two separate videos—which have totalled 450,000 impressions. The Socialblade growth curve shows a slight boost in new subscribers and views. But the channel’s big spike and breakthrough came a couple of weeks later with another hip-hop album: “My Beautiful Dark Twisted Fantasy” by Kanye West.

With nearly 630,000 impressions, the video is the most-viewed clip on the channel, responsible for the lion’s share of the channels 2.7 million views in total—and most of the 100,000 subscribers. Connor and Kevin also see the potential that the rap genre has in terms of a growth driver—and not just because hip hop culture, of which music is “only” one part. The comments are flooded with requests for reaction videos to a diverse collection of rap albums—something that very much grabs Connor and Kevin’s attention. Videos featuring Kid Cudi (“Man on the Moon: The End of Day”, “Man on the Moon II: The Legend of Mr. Rager”) and Travis Scott (“Rodeo”) follow.

Even beyond content request, the “turning the tables” guys listen attentively to their growing community. They didn’t have an official Instagram account until mid-September, when they finally gave in to the growing number of requests for one—even though it only had a sparse 5 posts and 2500 subscribers as of publishing.

In each of its 15 videos, “turning the tables” links to the recording artist(s), the credited songwriter(s) and publishing rights holder(s). By doing so, they protect themselves from any copyright infringement claims—but are also prevented from earning anything from the embedded ads. That’s a primary reason cited by the pair for opening a Patreon account. The proceeds earned from the Patreon account “will go directly back into our channel! (Better equipment, more vinyl giveaways, etc.).” turning the tables offers three different membership levels, including exclusive polls to decide future reaction videos, uncut album reactions and additional content. Two weeks after launch, the channel had a total of 1436 Patrons, which, if you take the cheapest membership level (USD 2.50), they would amount to just over 3K a month in revenue.

In addition, some brands have apparently showed their interest in the turning the tables community and partnering with the channel. Earlier this month, turning the tables published a reaction to Travis Scott’s album “Rodeo,” which was presented by “Manscaped” (a male body-grooming startup from the US, which is currently expanding internationally), marking the first time that the channel had a sponsor introduced, before the reaction video started; a discount code for Manscaped products was listed right below the video, as is common for such kinds of partnerships. 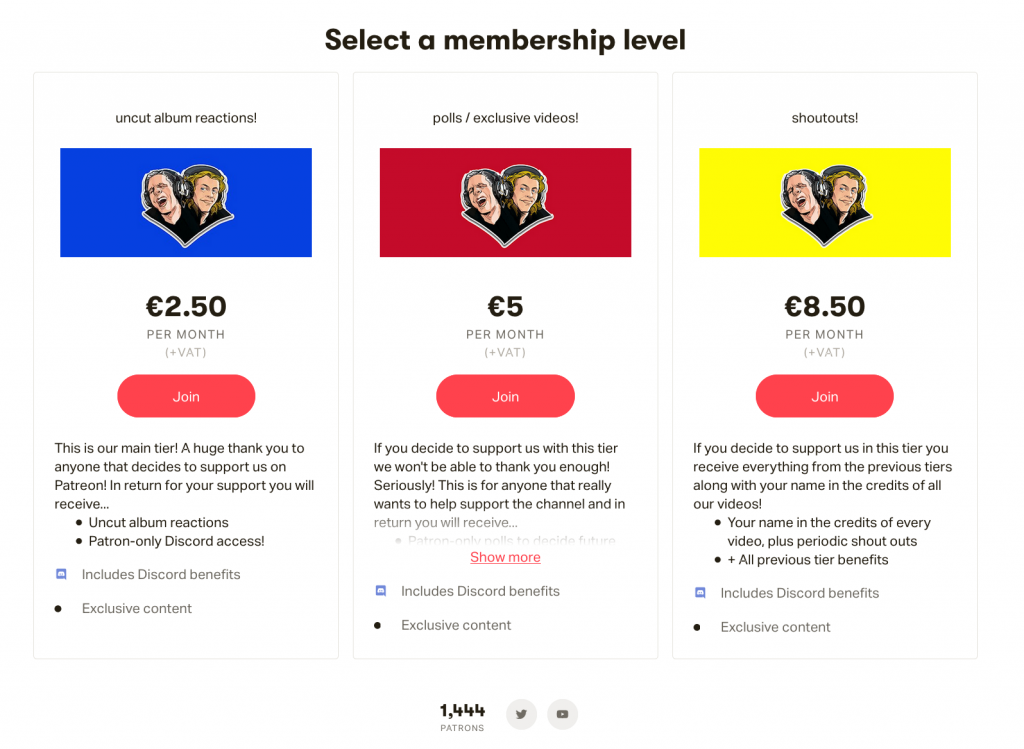 “turning the tables” offers three membership levels of Patreon, each of which entails a special feature.

How did Connor and Kevin achieve such rapid growth and success with “turning the tables?” It does appear, after all, that Conner and Kevin have gone against a host of common “best practices” for marketing, especially for Youtube marketing. Production quality was pretty bad at first, videos are getting longer not shorter (the last two coming in at 75 and 90 minutes respectively), they don’t use any kind of unique thumbnails and essentially refrain entirely from cross promotions from other social channels. The answer, in the end, seems to be part timing and part human nature. Reaction videos, especially those for hip-hop albums, have been growing in popularity in the past few years—and are almost a guarantor of reach on Youtube. Then there is the authentic father-son combination, who indulges its audience in a confirmation bias of a kind—who doesn’t want to experience someone else’s joy at hearing their favorite albums for the first time?