The snapping, crackling and popping success of ASMR creators

With popularity outpacing your favorite YouTubers, ASMR is a veritable cash cow for players big and small. We spoke with two smaller-scale about the secrets to their success.

It’s bigger than Taylor Swift. And bigger than Mr. Beast. Despite ASMR’s global appeal, it’s not yet cracked the mainstream. As it’s early days for ASMR creators, there are plenty of gains to be had and money to be made. We spoke with two creators who have built very lucrative ASMR businesses—with vastly different approaches.

First the clicks, then the fingernails. Evolving, transforming and getting longer and longer still. In January of 2018, Janina uploaded her first video. Back then, her nails were trimmed tightly and 100% natural. Five years later, they’re long and filed to a point, adorned with a bit of glitter to catch the falling studio light. At the horse farm, where she is riding, they received their fair share of sideways looks. Long fingernails don’t serve to help anyone tending horses—but they help Janina’s side hustle. In fact, they are tools that have helped her claw at success. Long fingernails just sound better. 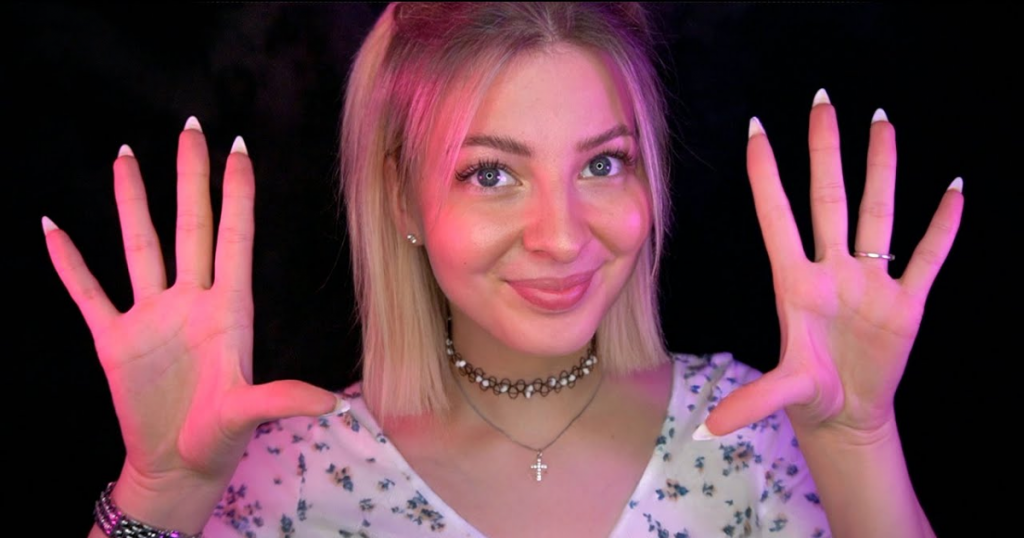 Janina is 27 years old and comes from Lower Saxony in Germany, where she makes ASMR videos. Standing for Autonomous Sensory Meridian Response, the idea is to create sounds that elicit a pleasant sensation in viewers. It’s said to promote relaxation. In her videos, ASMR Janina—her stage name on YouTube and other social networks—uses rubber gloves, makeup utensils and filled glass flasks, her toolbox if you will, to create sounds. She also uses her mouth, rubs her fingers together to create triggers, i.e. the sounds that evoke a soothing tingling sensation.

Worldwide, ASMR has become increasingly well-known in recent years (We first reported on it back in 2019, for example—albeit in a completely different context). It is, however, still not exactly a mainstream phenomenon. Nevertheless, the term ASMR is searched for more frequently on YouTube than yoga or a-listers, such as singer Taylor Swift and YouTube star Mr. Beast. There are even videos about it on Netflix. And creators like ASMR Janina have built entire ASMR-based business models.

Janina started her channel on Youtube in October 2017. Her boyfriend at the time, a Youtube creator, had shown her an ASMR video a few months earlier. At the time, she was studying to be a dental assistant—a lot of work for scant pay. Interested making her own ASMR videos, she spends the little bit of money she had saved to buy an audio recorder from Tascam. The device has two microphones for stereo recording—a near-must for ASMR, as it lets your voice and sounds float about in the room.

Her first video is a kind of experiment. Everything happens very quickly after that. “About six months later, I was able to live off of my videos,” she says. In the meantime, her channel is bigger than that of her ex-boyfriend. More than 430,000 people follow her on YouTube and her videos have been viewed almost 160 million times. ASMR Janina held the title of largest German-language ASMR-Youtube account for a very long time, until ASMR Miss Mi arrives.

Mina also discovered ASMR by happenstance. Like Janina, she keeps her real name out of the public sphere—as such we’ll leave their last names out of it. Mina launched her channel ASMR Miss Mi in 2019. Her look has evolved over time, including her fingernails. Little by little, she builds reach, but she lags well behind ASMR Janina. However, that changes in a Shorts amount of time. In response to the massive success of TikTok, YouTube releases its Shorts format in July 2021. On July 27, Mina uploads her first Tiktok short. More followed and in the ensuing months her views and subscribers take off (see chart). Today, around 1.13 million people follow her on YouTube alone and her videos have received almost 428 million views.

YouTube shorts are both a blessing and a curse. For Mina, they are the ladder that has enabled her to become the biggest ASMR creator in the Fatherland—in under three years. She now also makes a living from her videos, having previously worked in an agency. “In November 2021, I quit my job because I simply had too much to do with video production. Before that, I had reduced my hours, but that wasn’t enough,” the 31-year-old told OMR in an interview. To this day, she does everything from shooting to editing on her own. Her main source of income is now advertising revenue from YouTube, which probably amounts to a six-figure sum per year. She declined to provide specifics.

As a source of revenue, Onlyfans is her primary platform. She says she earns more from the subscriptions (15 US dollars per month) that users take out there than from advertising revenue on YouTube. In addition, she offers personalized videos there, in which she uses the users’ favorite triggers, for example. Videos with a length of four to six minutes cost 300 to 400 euros. However, many users order longer ones. In the very first month, ASMR Janina raised a five-figure sum through Only Fans—and donated it. Since then, success has continued. “The most successful month so far was January—and it’s not even over yet,” she says.

While ASMR Janina’s target group is 60 percent male, ASMR Miss Mi has built up a predominantly female audience. 70 percent of her users are female, many of them minors. She relies heavily on role-playing in her videos. In her videos, she pretends to put makeup on her viewers, comforts the heartbroken and, more or less, plays the role of confidant and friend. She produces two to three Tiktoks a day, plus three YouTube videos a week. In addition, there are live streams on YouTube and Twitch, as well as the content she posts on other platforms.

She is also cultivating a relationship with her viewers, whom she calls “Miss Mi Fam”, specifically via live streams. It costs EUR 3.99 to become a member of her community on YouTube. In live streams, you are named in return and can post special emoji stickers. “In ASMR, you have the nicest community because everyone is looking to relax,” says ASMR Miss Mi, speaking to OMR. She also used to try to personally reply to every comment on Instagram and the like. But she can no longer manage that today.

Perhaps because of the intimacy that videos of artists like ASMR Janina or ASMR Miss Mi entail, there are few brands that advertise in this space. ASMR Miss Mi, however, has already collaborated with manufacturers of cell phone cases, smoothie provider Truefruits and oral care brand Dr. Best. She still uses the same toothbrush she used back then as a trigger. Nico Poschmann and his agency Unyque have also negotiated various collaborations for ASMR Janina, including with Microsoft.

But in the U.S., for example, there are also mattress manufacturers like Helix Sleep that use the reach of large ASMR accounts for targeted advertising. “I think a lot of people don’t realize at all the potential there is when people whisper, because it always suggests that there’s something mysterious happening now. That’s why everyone always listens carefully,” says Mina aka ASMR Miss Mi: “But I already have the feeling that more and more companies are now bold enough to advertise in ASMR videos.” Nico Poschmann admits that the market for German-language ASMR accounts is naturally limited. Nevertheless, he too sees opportunities to further expand his client’s reach—through Spotify, for example. ASMR Miss Mi, meanwhile, has another goal. Instead of doing ASMR alone in front of the camera, she would like to start a live tour.