How to hack the algorithm with (more or less) "meaningful interactions"

“Organic reach is dead on Facebook” is something you hear from the marketing industry almost on repeat. If that’s the case, then how was a page from Germany able generate 3.4 million impressions with a single post—and to do so without paying a dime? OMR takes a look at the method and how it is able to work for the moment.

Anyone who’s frittered away even a little bit of time in the past few months has surely seen a certain post trope in Newsfeed: a visual with some kind of headline prompting you to tag friends in a comment under the post whose name begins with a given letter. “These two NEED to fly to NYC for a shopping trip” (44 reactions, 870 comments, 4 shares). Or: “@J @M @L need to go with you to Disneyland Paris” (240 reactions, 3200 comments, 17 shares)

“Haha, now you owe me a bunch of cash because Facebook says so!”

By using the @ symbol, page operators are trying to get users to actively comment by seeing which of their friends are suggested first when typing in the given letters after the @-symbol. They can then demand something from them in jest, like ice cream (1250 reactions, 30,000 comments, 75 shares) or even a very generous money transfer of 2000 euros (373 reactions, 10,000 comments, 19 shares).

Some pages use the entire alphabet to further boost the chance of engagement. Depending on the first letter of the first name, there are then different suggestions for how that person “will finish the current college semester” (957 reactions, 17,000 comments, 27 shares) or which Halloween costume they need to wear (29 reactions, 622 comments, 12 shares).

Other versions call on people, who have recently written users via WhatsApp, to get in touch with them and make a Advent calendar, for example (2000 reactions, 30,000 comments, 327 shares). Soliciting to people to partake in joint activities during the Christmas season is a relatively beloved model: posts from Elle magazine (1900 reactions, 36,000 comments, 415 shares), a German viral page “gefällt das nicht” (Doesn’t like it) (132 reactions, 2200 comments, 38 shares) and “100 Dinge, die wir ohne Horrorfilme nie wüssten” (100 things we never knew about horror films) (35 reactions, 950 comments, 15 shares) all call on users to get together to make Christmas cookies. The last two posts even employed the same visual verbatim.

This super simple, maybe even insipid mechanic delivers a massive amount of reach when done right, a fact that is backed up with screenshots from page operators obtained by OMR. The page “Lieblingskollegen” (favorite co-worker) used this method to generate over 3.4 million impressions with a single post. That’s according to a screenshot posted to LinkedIn by Benedikt Böckenförde, CEO and founder of the company behind the “Lieblingskollege” page, Visual Statements.  The “Lieblingskollegen” page itself only has 164,000 fans. It would appear that the combination of post content (“Which person did like sitting next to most in school?“) as well as the page’s central theme (work & profession) contributed to the post’s success. 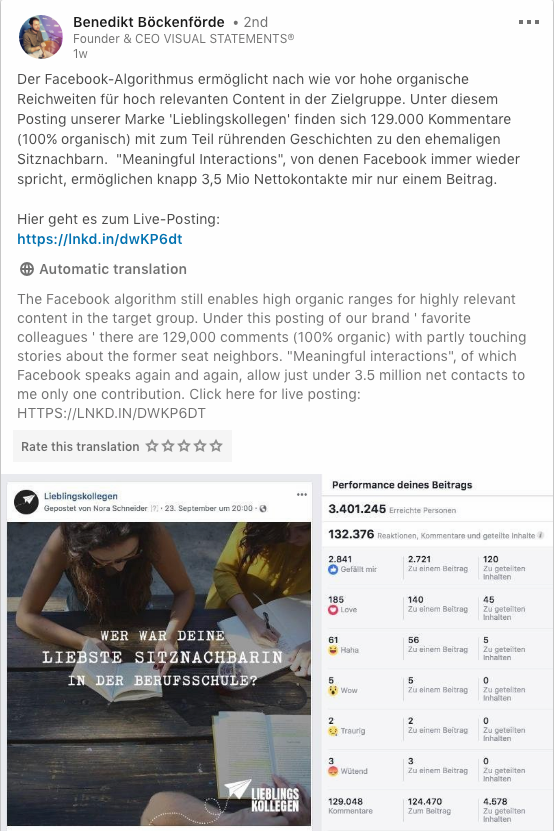 The assumption is backed up by another “viral hit” of a similar bent: A shopping center in Germany’s second-largest city, Hamburg, instructs Facebookers in a post to tag their best “Shopping Teams.” 48,000 comments and more than 3 million impressions in Facebook Newsfeed—a couple hundred thousand more than Hamburg has people, btw—as is backed up by a screenshot from Hamburg marketing agency More Marketing heading up the shopping center’s social provided to OMR. Another comparable post from the same shopping center in Hamburg, where users are told to tag someone, still managed to reach 1.9 million Facebook users. Here, too, the actual number of fans to the Facebook page (20,000) is dwarfed by the post’s impressions. 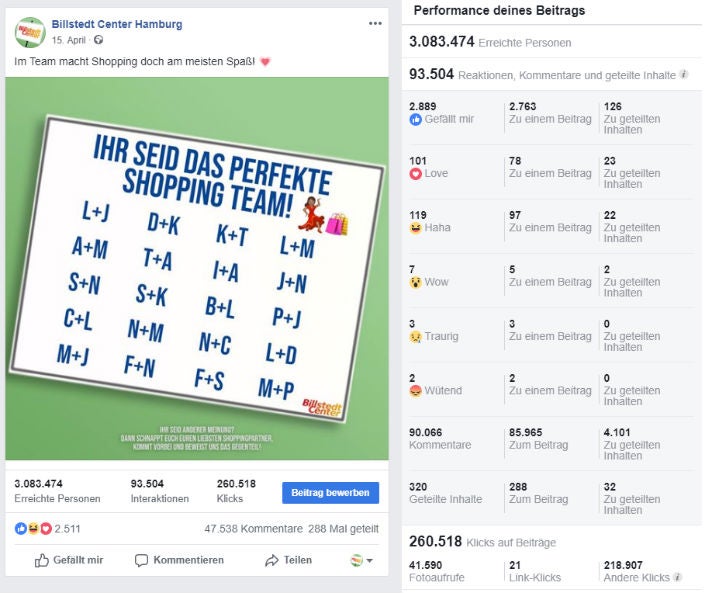 A internal screenshot shows the incredible performance of the post from the Hamburg shopping center (Screenshot: More Marketing)

A different local blog, named Nordlippischer Anzeiger, only has a paltry 3300 fans, but managed to dwarf its own fan figures via a similar mechanic. They swapped out the letter part, but added a bit of time pressure by saying “Tag a friend. If they don’t reply within 30 seconds, they owe you an ice cream.” The end result: over 300,000 clicks, 115,000 comments and more than 3 million impressions. 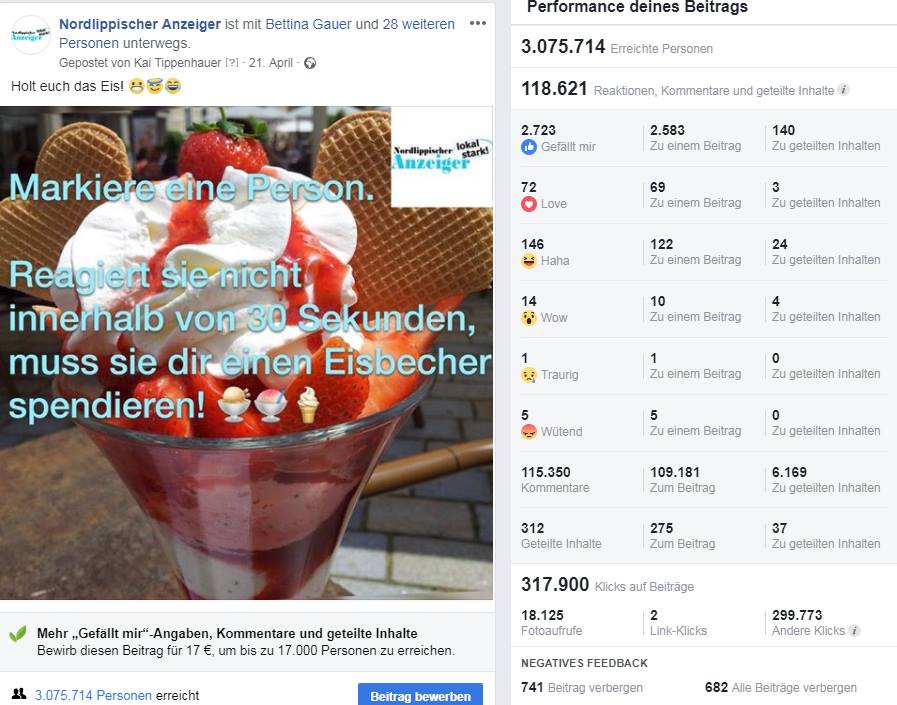 Performance good enough to make you scream for ice cream.

How exactly are the posts able to notched such impressive performance figures? In January of this year, Facebook announced an update to Newsfeed,which prefers posts that generate exchange amongst friends and so-called “meaningful interactions.” On top of that, posts from friends and family are prioritized over those by pages. In a video from this past April, Facebook reps said as much in plain English, “Interactions with individuals from your own network get the biggest ranking bonus.

Here’s why the posts are killing it

If you take a look at the comments beneath the “tag-your-friends” posts: users are talking to their friends. But that oftentimes snowballed as others would comment on the friends conversations. And thus, the page operators checked off all the boxes in the new Facebook algorithm. The Facebook algorithm boost was immense.

But what can site operators hope to gain from the ploy? Do their other posts also stand to piggyback off the success of the above-mentioned posts and get elevated reach figures? “We didn’t see any change regarding sustainability,” says Nathalie Land from More Marketing. “Our posts’ organic reach received a slight bump for a little while thanks to the algorithm, but the difference was marginal.” Nevertheless, it was the confluence of post content and page focus that fused together to generate a massive branding effect. “Unfortunately, we have no way of being able to measure who actually physically went to the shopping center as a result of the post,” jokes Land.

Do the viral hits have a positive impact on the brand pages?

Facebook expert Felix Beilharz doubts that the success of a single post has any residual positive effect on the rest of a site’s posts. “No, according to Facebook there is no spillover in the algorithm to other posts. Every post is analyzed on its own merits. Therefore, an excellent post does not “reward” any subsequent posts—conversely, poor performers do not penalize others either. If someone claims otherwise, they need to back it up with evidence—I have yet to see anything convincing.”

Good-performing posts have other benefits, says Beilharz: “Reach for the brand, even if the post content is often off-brand, fan generation, a boost in engagement-based custom audience creation, etc. It really only makes sense if you as a brand are diversely positioned and are thus able to find a relevant use from such a high reach.”

As with all things related to the Facebook algorithm, there are no guarantees that the strategy in the future will work to produce massive organic reach. Last December, Facebook announced that it would soon enact measures of fighting so-called engagement bait, penalizing offenders. Examples that Facebook cited are those that are solely designed to bluntly incite user reactions without placing them in a social context.

Only Facebook itself knows if it will consider these posts to be engagement bait. At the end of the day, these posts are producing exactly what Facebook wants: interactions among users, who are then more likely to stay in the Facebook universe. The lack of clarity as to what Facebook will decide on regarding which posts to boost is further compounded by the fact that site operators don’t actually see any boost in traffic and thus have zero chance of directly or indirectly monetizing the reach.