It used to be that if you wanted to learn how to play the piano the only way was to find a teacher and pay a pretty penny for lessons—rulers punishing knuckles for every missed key included. While that option does, of course, still exist today, there are digital offerings popping up to retune our thinking—and our habits in the musical instrument space. One such product is Flowkey, a piano learning app out of Berlin. Launched in 2014, the company was an early mover in a market that today readily produces unicorns. We spoke to founder Jonas Gössling about acquiring users, how Flowkey has succeeded in gaining over 100,000 paying subscribers in a very competitive space and if a lack of VC funding will force Flowkey the face the music.

“Ever since I can remember, I’ve been playing the piano. And I’m happy that I was able to found a successful company that revolves around my passion for music,” Jonas Gössling tells OMR. Just like many a great song, Flowkey could be seen as a product of chance, a fortuitous turn of events that could have easily gone another way. In Gösslings case, Flowkey is only around, because he decided against becoming a professional musician to pursue a degree in industrial engineering at the Technische Universität in Berlin. While studying in the German capital, however, he continued to play the piano in his free time. As such, he would go to YouTube, among other places, in search of tutorials for various pieces. “That’s when I noticed that there was a lot on offer. The genre was flooded with tutorials,” says Gössling. 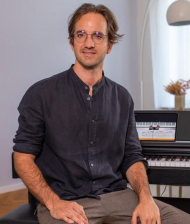 Although thousands of channels have long since begun publishing videos, ostensibly designed to teach people how to play a certain piece, Gössling was less than convinced. Youtube videos, he says, have to be paused manually and typically play a piece at normal speed, something that goes against the standard way of learning the piano. “At some point, I just realized that there was major potential for optimization and that an app that shows you what you’re doing, adjusts to your own speed and gives you the option of repeating shorter sections of songs would be very helpful,” Gössling recalls. To put it another way, the space needed an app that did not interrupt the flow of learning.

From the personal to the professional—during Uni

Along with fellow students Ahmed Hassan and Alexander Heesing, Gössling started working on a prototype during his engineering studies. The basic crux of Flowkey is to provide users with an app that helps them learn to play the piano by “playing along with the app.” At the time, the trio continues to do everything themselves. Gössling recorded the first 50 songs, while Hassan programmed the web-only application. the beta phase for the first iteration drew between 3,000 and 4,000 users. “From the beginning, we sought to pursue a subscription model,” says founder Gössling. But when those plans are unveiled during the beta phase, there was nearly zero resonance. “We sold a grand total of one subscription. An absolute low point,” says Gössling.

The founders soon came to the conclusion that browser-app is not very practical for learning the piano. “It was obvious that needed to get into app stores with a mobile, native app,” says Jonas Gössling. With financial and mentoring support in the form of a startup grant from the Centre for Entrepreneurship (CfE) at the TU Berlin, a kind of startup funding hub, Flowkey subsequently focused on an app for the iPad. To this day, the core concept of the app remains in place.

taking a page from learning apps in other fields, Flowkey begins by gauging a new user’s current skill level of knowledge, goals and preferred music genres before they begin. A beginner’s lesson consists of nine short chapters, dealing with the basics such as sitting and hand position, as well as piano key basics. Those are all free of charge, as are eight pieces of music, including “Amazing Grace” by John Newton and Beethoven’s “Ode to Joy” from the ninth symphony.

For advanced users, access to the complete app, its catalog of over 1500 songs from a variety of genres and the entire course catalog is on a subscription basis. After a seven-day trial period, a monthly subscription runs between EUR 9.99 and EUR 19.99, depending on the length of the subscription taken out. The app monitors and corrects notes users play on the piano by connecting the app via a USB stick or through the microphone on the user’s smartphone or tablet.

Business Angels, Crowdfunding and an appearance on “Shark tank”

At first, the young startup not only receives support from CfE, but also from four business angels, who invest in Flowkey while still in beta. Rüdiger Zarnekow, a professor at the Technical University, advertising agency founder Hans Ulrich Helzer and Heinz Ackermann (seed investor at Dawanda) acquire a 4% stake, while Marcel Risker acquires a 4.58 percent share of Flowkey GmbH—which all three still have to this day. The remaining company stake is held by the three founders.

The company has not yet brought any other investors on board, although as Jonas Gössling says there is interest. “We have received numerous inquiries from private equity companies in recent years, especially from the USA. So far, we have declined all of them. Primarily, because we want to retain our entrepreneurial freedom.” Although that is the case, Flowkey does receive an injection of external capital in 2014, as a crowdfunding campaign on Seedmatch yields EUR 300,000.

However, the appearance on the German “Shark Tank” (called “Die Höhle der Löwen” in the Fatherland), had a much more consequential impact—without an investment ever being made. “We were already open to a deal, but of course the prospect of marketing the company simply through participating was enticing,” Jonas Gössling says. After the broadcast in October 2015, Flowkey had a positive cash flow, he says. “Before that, we roundabout EUR 15,000 in sales, but also EUR 30,000 in costs,” says Gössling.

For five years, Flowkey has survived and thrived without any paid marketing, instead relying on a channel that was originally the genesis for founding the company: YouTube. “At the time, there were no companies interested in partnering with piano learning channels on Youtube,” says Jonas Gössling. “We were the very first one to reach out and suggest affiliate deals.” For many channel operators, i.e. piano players or pianists, this type of collaboration has been very lucrative for a long time, he says. “But at some point, the competition increased, payments were offered upfront and pure affiliate deals became very rare,” says Gössling.

Nevertheless, the channel is still part of Flowkey’s marketing strategy today; the company still works with most of the larger piano channels. The YouTube channel “Peter PlutaX”, for example, still links to Flowkey in its videos today (nearly three million subscriptions and a total of over 1.5 billion plays). “In the meantime, however, we offer more than just affiliate deals,” says Jonas Gössling. Nevertheless, the channel is no longer as influential as it was a few years ago.

Lots of word of mouth—and more and more TikTok

The fact that Flowkey did not have to initially invest in standard paid marketing on Google, Facebook, Instagram and other such platforms is testament to the strong growth via other channels. “We are very strong organic areas, such as search engine and app store optimization. That’s where we decided to invest heavily from the start and have grown considerably as a result,” says Gössling. SEO analysis tool Sistrix shows nearly 8,000 keywords ranked for the flowkey.com domain, including extremely relevant product keywords such as “online piano lessons” “well-known piano pieces from films” or “learn piano online.” For each of these, Flowkey ranks number 1. 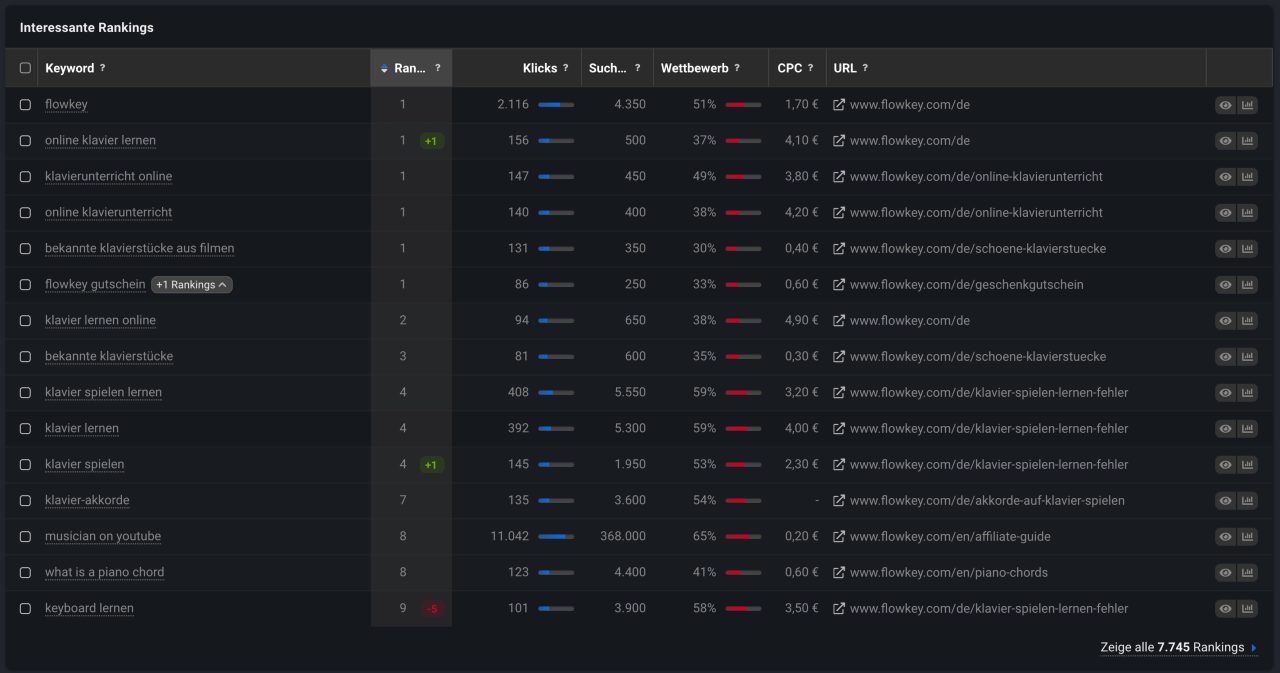 A look at the keyword rankings for flowkey.com (Source: Sistrix).

According to Gössling, Tiktok is becoming an increasingly relevant channel. Not really a surprise, considering the platform’s enormous growth and the growing connection to the music industry. “Tiktok is now also performing very well with paid advertising. That’s where the majority of our performance marketing spend currently goes,” says Jonas Gössling. For about a year now, the company has also been trying out user-generated ads, a performance marketing trend that OMR founder Philipp Westermeyer recently presented at the annual “State of the German Internet” keynote this past May.

However, Flowkey acquires the bulk of its new customers via brand directly, i.e. “word of mouth and not attributable to a single channel,” to put it in Gössling’s words. Apple’s new app tracking transparency as also had an impact. “We had to find new solutions and adjust marketing. In the end, we simply don’t know exactly the behavior of most individual users as we did before—but that’s the way it is for everyone,” Gössling says

One special partner and plans for the future

Despite all the new strategies and performance optimization measures, Flowkey’s biggest, most-consequential marketing move happened more than six years ago. Thanks to a partnership with Yamaha music, customers get a three-month Flowkey subscription for free whenever they buy an instrument from Yamaha. “This has proven very effective. Of all of our channels, these users convert to full-time subscribers most frequently,” Gössling tells OMR. However, he declines to provide an exact figure on how many users the company currently has. Instead, he only states that well over ten million downloads have been generated and subscribers are in the six-digit range. User the most conservative estimate and that the lowest subscription price in Germany, that would translate into about EUR 1m in sales per month. Gössling’s statements on the company’s financial performance also align with that reasoning. “We have an eight-figure turnover, a seven-figure profit and are profitable. I don’t think there are many companies in the consumer app space in Germany who can tout that without funding.”

Yamaha informing (in German) buyers of keyboard instruments that their purchase contains a free three-month subscription to Flowkey.

In contrast to Flowkey, the competition has taken on big investors in recent years. Israel-based Joytunes, for example, operator of Simply Piano, raised USD 50m at a USD 1b valuation last June. Leading the round was GV, the VC arm of Google. Finnland’s Yousician was also able to raise around USD 33m in April 2021, but does not exclusively focus on the piano.

“Even without VC money, we are one of the world leaders in our segment—and considerably larger than most other piano learning apps,” Gössling points out. Despite the success with a piano-only focus, Gössling doesn’t want to rule anything out moving forward. The company has considered adding new instruments from time to time, but has so far always decided to continue focusing on the piano. “We still see a lot of potential there to flesh out,” he says. The next steps for the time being are to increase brand awareness worldwide. Gössling says that the US is the most-important market, ahead of the DACH area, and that reaching that goal will require expanding the current team of around 50 employees.