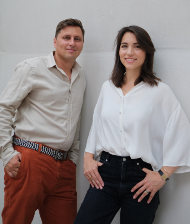 “I talked to friends about their porn habits. There were big differences between men and women. Men were relaxed and open about their experiences. Women were more reserved about it, often for fear of being thought of as dirty,” says Kratzenberg. “I then simply asked myself how it could happen that there are such big differences.” So she suggested to co-founder Horwitz that they start a company that reconnects people with their sexuality. The first thing that came out is a flop. “We first built a terrible relaxation app that we tested on a few female friends of ours. They told us to stop immediately.” 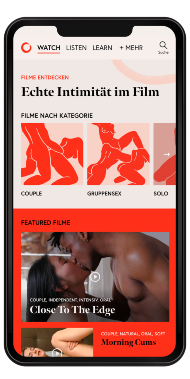 Cheex users can choose between films, audiobooks and educational content

So that’s precisely what Cheex aims to focus on. Step one is only working with production companies that produce fairly. “The biggest challenge at first was finding out just how the performers were treated. That’s why we decided to work with and paid them directly,” says Kratzenberg. “Then, over time, we found out which production houses the performers liked to work with. We felt it was the only logical move as there is no central watchdog for quality.” The erotic films at the center of the service are produced by companies such as ErikaLust, Sinfulxxx and Sinn Sage. Whether it’s couples’ sex, group sex, LGBTQ+ sex or fetish sex, Cheex users should always be able to assume that all performers are really enjoying themselves. “In all of our content authenticity and pleasure should be at the fore,” she says.

While the content offering appears to resonate with users, Kratzenberg declined to reveal how many of the 100,000 Cheex subscriptions sold in the past two years are still active users. A monthly subscription costs 14.90 euros and an annual membership is cheaper on a monthly basis at 118.80 euros (9.90 euros per month). Access to affordable pornographic content is difficult for many, she says, so the subscription offers a transparent solution that also means guaranteed and predictable revenue for the company. What does a typical subscriber look like? Cheex users are 70 percent female—as opposed to approximately 30 percent on typical porn platforms. But there is also an exciting trend among male Cheex users. “I thought we were mainly appealing to emancipated women. But we also have a large intersection with Playboy readers,” says Kratzenberg. And that is an extremely enticing cohort.

Influencers as a safety blanket

Platforms and retailers of erotic content cannot fight this battle for target groups as freely on all platforms as other companies. Even this article would not make it through the content filter for Meta ads. Therefore, performance marketing on Google, Facebook, Instagram et. al is not at their disposal. At first, Kratzenberg took a very naïve approach to marketing and sought to cobble together a standard, diverse marketing mix. Instead, Cheex has had to alter the word “sex” to “Se+” on its own Instagram account with just under 50,000 followers so as not to risk suspension. Cheex’s advertising strategy on social media is therefore based mainly on influencer marketing. “I started with influencer marketing because you are in direct contact with the target group,” she says. “It also works quite well with our brand and the strategy is not used by other adult sites.”

However, Cheex has already plateaued with its influencer marketing, she said, and other channels are becoming increasingly important. Three current strategies the company is using are a free digital magazine on sex and pleasure topics to attract new users, upping their SEO game and, most recently, the first Cheex podcast, which is intended to introduce potential customers to the topic and the platform. “Cheex Talks” was started by a colleague on her own accord, and the format has since brought in a surge of new users.