It could be the most successful ad campaign ever on Tiktok: #YouOwnIt videos have notched approximately 2.3 billion views. And the campaign was developed for cosmetics company MAC by an ad agency from Hamburg, Germany called Pulse Advertising. OMR spoke with Pulse co-founder and CEO Christoph Kastenholz about ads on Tiktok and analyzed how the incredible campaign performance came to be.

A young, robust and bespectacled lady stands on the street in jeans and a blouse, her hair tied back in a bun. She’s drenched in rain. She seems frustrated by her situation and twirls. She then magically appears in a slick new shop dominated by neon light. Instead of everyday threads, the protagonist is now outfitted in an elegant 1950s-style dress, her hair dyed red; red lipstick pops out. She takes a catwalk like a model, runs her hand through her hair and blows a kiss into the screen.

Over 2/3 of all TikTok users are Gen Z

That video is just one of many on the platform under the hashtag #YouOwnIt. The clip was produced and published by plus size influencer Anna OBrien, known online as “Glitter and Lazers.” She is one of 18 creators compensated by MAC Cosmetics to upload videos to Tiktok using the hashtag.

The goal of the campaign: to boost the profile of MAC among Generation Z (people born between 1997 and 2012, i.e. today’s teenagers). According to this pitch deck, with which Tiktok mother company Bytedance hopes to acquire new advertisers in the USA, a which was published by AdAge, 69 percent of Tiktok users are under 25 years old. It would seem that such demographics convinced MAC Cosmetics to invest in an ad campaign on Tiktok.

TikTok is the only home for such branded Hashtag Challenges

The cosmetics brand commissioned Hamburg, Germany-based ad agency Pulse Advertising to come up with a so-called branded hashtag challenge. Challenges are one of the central engagement drivers on Tiktok: A more or less creative concept that is interpreted by hundreds or thousands of TikTok users. The audio track usually stays the same, whether it’s a song snippet or a famous line from film or TV. Each challenge has its own hashtag, under which all such videos can be found. 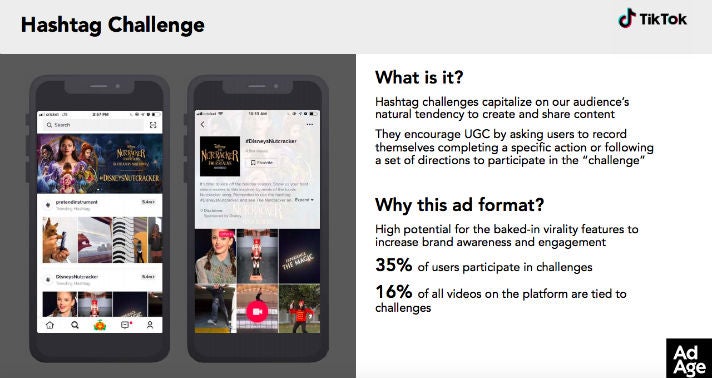 Branded hashtag challenges are (compared to more traditional performance-based self-booking tools) one of several branding advertising products on Tiktok (additional products can be found in the pitch deck published by AdAge), and quite probably the product that best encapsulates the platform’s uniqueness. For the hashtag challenges, advertisers sponsor a specific challenge on Tiktok; the hashtag page is marked as an ad with the advertiser’s logo. On top of that, the challenge is promoted for a set amount of time with a banner on Tiktok’s “explore” page, where Tiktok users can find out about challenges to which videos are currently being posted.

The subpage for the #YouOwnIt challenge on the Tiktok app. Circled in red: the 2.3 billion views (edited screenshot)

Generally speaking, several influencers make numerous posts at the start of a challenge to help it gain traction and, if all goes well, to catapult it to viral status. “Tiktok can provide influencers to advertisers if needed,” says Christoph Kastenholz, whose agency Pulse conducted the campaign for MAC. “It’s not uncommon, however, for a campaign storyline to take shape only after talking with influencers. On top of that, Tiktok does not have the capacity available to implement a campaign of a similar scope as MAC Cosmetics did.”

Pulse selected 18 influencers for the campaign, where the focus was firmly on diversity. In addition to Anna O’Brien, whose dimensions do not square with those of traditional models, creators involved in the campaign included metrosexual Latino Youtuber Louie Castro ) and Noah Murphy, a teenager who wears a feminine dress in his campaign spot . Kastenholz says that Pulse was able to decide which videos to put atop the TikTok hashtag page.

A budget in the lower 6-figures

For this kind of Tiktok campaign to succeed, Kastenholz says that advertisers need a budget in the 6-figure range at least. “That includes the placement costs on Tiktok’s platform, the spend for the music license in all the challenge videos, as well as costs for placements by influencers.” The 2.3 billion views were apparently enough to please MAC Cosmetics: The challenge “completely exceeded our expectations,” MAC Cosmetics’ Diederik Koenders is quoted as saying in a Pulse press release.

When discussing the figures it bears mentioning that Tiktok has a reputation for being very liberal in counting views, possibly counting every cycle of a looped video as an individual impression. It would hardly be new territory for a platform to have a very loose interpretation of metrics as Facebook has had that reputation for years. We were unable to find anything on TikTok’s website about how they count views.

Sixfold the views of the most successful campaign

Then, if you scroll down on the hashtag page for the Tiktok campaign you will find a host of additional videos with the #YouOwnIt hashtag by creators who didn’t care about the core principle of the challenge and tagged their videos with several different hashtags. This scheme, too, is not new to social media. Scores of users on Twitter and Instagram employ a plethora of hashtags in a straightforward attempt to maximize reach and boost visibility by tagging their posts with the hottest hashtags of the moment.

Nevertheless, it is still very impressive that the #YouOwnIt challenge seems to be the most successful ad campaign to this point ever on TikTok. Although there are generic hashtags like #tiktok and #love as well as the unbranded hashtag challenge #pov which could have resulted in more views on Tiktok, “the most successful branded challenge on Tiktok has generated 400 million views,” says Kastenholz. With 2.3 billion views, Pulse and MAC were able to best that mark by a factor of six.

It is within the realm of possibilities that nearly every single TikTok user in the West repeatedly came in contact with the campaign, or at the very least with the hashtag. And that is because TikTok has roughly 300 million users outside of China according to the pitch deck leaked by AdAge. Kastenholz says that TikTok did not provide reporting on the number of people the campaign reached. “What TikTok offers for targeting and analytics is still pretty limited.” He did say that Pulse received insights into the campaign’s performance through screenshots of impressions that creators generated, which showed that a majority of the views were derived form user-generated videos. “The creators that we collaborated with notched a total of 15 million views.”

According to Kastenholz, TikTok did include the number of impressions the hashtag page and the banner on the challenge explore page generated in its campaign reporting. Kastenholz declined to give OMR specific figures. He also said that the limited tracking options make it unclear what kind of impact the campaign had on sales for MAC products. “We saw a clear spike in awareness for the MAC Cosmetics page. Additionally, we set up a Tiktok account for MAC that we neither linked nor filled with content. And still, the page received 5000 follower requests in a short amount of time,” reports Kastenholz.

“One major factor in the campaign’s success was that TikTok prominently promoted it with a banner on the Explore page. Another was that we piggybacked off of the New York Fashion Week, which as an event already had a massive amount of attention,” says Kastenholz. “MAC invited six of the 18 influencers we collaborated with to a backstage event at the Fashion Week.”

Not all the content posted by the influencers, however, was commissioned by Pulse. Victoria Lyn, for example, who has 1.6 million followers on Tiktok reported on the New York Fashion Week in her Instagram stories (where she has 490,000 followers) and during which she also posted ads for Mac, or Seth OBrien, who currently has approx. 743,000 followers on Tiktok and 20,000 on Instagram. “30 percent of creator generated content was earned, i.e. received no compensation from us,” says Christoph Kastenholz.

What’s the latest tool for marketers on Tiktok? Comments. Here’s what they’re saying.