Next article:What’s up with the changes to ad prices on performance marketing giants Facebook and Google
Roland Eisenbrand & Scott Peterson

What’s currently going down of social-video app TikTok has all the hallmarks of a mini goldrush: as the number of users grows, more and more influencers, creators and marketing makers are trying to hit the motherlode by tapping into the platform’s reach. Many resort to tricks to outsmart TikTok’s algorithm and get preferential treatment. Today, we’re taking a closer look at three current TikTok growth hacks that have proven successful and show examples.

The figures that TikTok currently enjoy are staggering: The app has reportedly been downloaded 1.65 billion times worldwide across all operating systems according to estimates by Sensor Tower; 738 million of them last year alone. According to a presentation published by TikTok, made public by US-based marketing publication AdAge in October 2019, TikTok says it notched 800 million monthly active users, 300 million of which stem from beyond China’s borders.

TikTokking for nearly an hour a day

Even more impressive than the MAUs is usage intensity. According to a TikTok sales deck published by Digiday in November 2019 (Paywall), the amount of time European TikTokers spend on the app can range from 41 minutes (Spain) to 53 minutes (UK) every day. A few weeks ago, the platform operators began reaching out to users who spend more than an hour at a time on the app with videos recommending that they take a break. 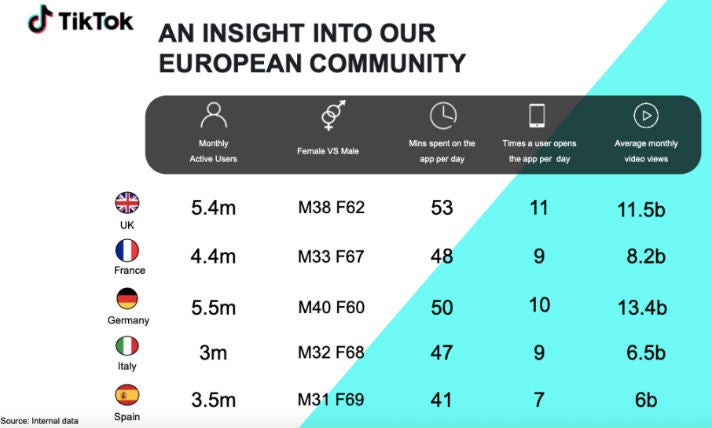 In Europe, the total number of monthly video views TikTok generates starts at 6 billion in Spain and reaches its peak in Germany with 13.4 billion. Translation: the potential reach is enormous. Users on the platform cannot seemingly consumer enough videos, making it imperative for the platform to constantly restock. Influencers and marketers therefore currently have the opportunity to tap into a massive amount of organic reach and visibility for free—something that has become exceedingly difficult on more mature platforms (e.g. Google, Facebook and Instagram).

Winning on TikTok is “For You”

In contrast to social media platforms like Facebook and Instagram, TikTok followers are significantly less important a factor when it comes to generating reach. A major share of video views figures to stem from the “For You” page, which is personalized for every user based on interests and regardless of engagement or length of view.

Many TikTokkers have proven themselves to be very resourceful, finding means and ways of getting their videos into the “For You” page. In the present Wild West era of TikTok, where either seemingly anything goes and draconian measures are taken to purify the platform’s image, some users succeed at finding the right levers to coerce the algorithm into giving them a boost.

Until just a few months ago, most TikTokkers had been designing their videos to generate multiple views (sometimes, without users realizing immediately that the videos were made with such a purpose in mind, e.g. by implying that the video contained some kind of surprise resolution, which ended up never being there).

There appears to have been a change however in the past few weeks with the focus shifting to other forms of engagement—possibly due to the fact that TikTok’s operators constantly tinker with the algorithm. As far as we can tell, engagement with the buttons to the bottom right of the user interface has increased in importance for generating visibility on the platform.

Livestreaming a candle in the freezer

One “engagement hack” that has become popular in that time is the so-called sleep stream. TikTok allows users to livestream content and clever content creators discovered that they could generate oodles of organic reach and visibility literally overnight by filming a stationary motif overnight (as the New York Times documented in this article).

The sheer amount of creativity among Tikokkers was on display in coming up with motifs: After many users filmed themselves sleeping, others livestreamed the view of a local nightclub from their window, pyramid of plastic cups (“Will they fall?”) and a pair of sneakers left on the street (“Who’s gonna steal my Vans?”) to TikTok. One German users filmed a candle in the freezer for several hours.

The mechanic for generating reach is always the same: Creators put together a “normal” “announcement video” on TikTok, in which they draw attention to the livestream explaining to viewers what they can expect. In these videos, users oftentimes point to their profile picture, by tapping which viewers are redirected to the livestream once it’s active.

Several creators have managed to generate views in the 7 to 8-figure range with livestream announcement vids. The most successful video by TikTokker erik_hp, is the announcement for his plastic cup livestream which notched 12 million views. The following screenshot, which was posted to Twitter by an apparently unaffiliated user, indicates that over 26,000 people followed the stream.

Live streams are not only attractive for TikTokkers in terms of reach, but also financially as streamers can ask for virtual donations. In the Chinese version of TikTok, one user is reported to have received a virtual gift worth USD 11,000 on one of his “sleepstreams.”

Another popular method on TikTok to trigger engagement and thus boost reach is to make videos that force users to pause them in order to see certain elements. Creators splice in such elements for no longer than a couple of milliseconds, thus rendering them invisible at normal playback speed.

One goal here is to challenge users to pause the video at the right moment. And should they tap the screen repeatedly in quick succession then they automatically leave a like without intending to. Another objective is to encourage viewers to slow down the playback speed in one way or another, e.g. by sharing it to another platform, downloading or by recording a “Duet” with the creator. What’s important here is that every tap is a signal to TikTok’s algorithm that a user has engaged with the video, thus giving it a push.

The trend began with inserted text bubbles which flashed various messages for a fraction of a second. Some of these videos generated views in the 8-figure range (the above example generated 23.8 million views, while this one has 15.8 million views. Users began posting the hidden message in the comments.

The latest trend deals primarily with apparent “embarrassing” or “bold” images, which users insert into videos for a millisecond. The above video has 21 million views, this clip has 6.8 million. The practice is so widespread that there are accounts dedicated to reposting such videos and to display the “embarrassing” images for users. The account “pausebot” lists 150,000 followers, 721,000 likes and its video views are purported to be in the 7- to 8-figure range.

The third effective hack at the moment for boosting engagement more or less artificially and thus getting a bonus from the TikTok algorithm is using large captions to get prompt users to share the video. One current example comes from German TikTokker andrew_slow, who challenges users to take a video with a smurf-sounding choir and share it on Snapchat, because the Snapchat app has a function to slow down the audio track: “Go to Snapchat and then click the snail. There are four guys who sing!” The video has amassed 2.1 million views since it was published 8 weeks ago.

“I bet you can’t share this video on Snapchat!”

Everytime a user taps the share button, the TikTok algorithm figures to have registered that as a signal that the video was relevant for the user, even if the user never posted it on another platform.

Other TikTokkers are also fine with making bogus claims in an effort to get users to click the share button. Two separate TikTokkers recently claimed in a video independently of each other that the clip users were watching could not be shared to Snapchat (of course it could in fact be shared to the platform). The result: 1.2 million and 902,000 views.

Previous article:Major thanks from OMR for all of your support!

Further reading on this topic
Talk of the town
Scott Peterson19.12.2019

Should brands take note? How an unknown card game went viral on TikTok—and what it means for other brands