If you are based in Germany or France and are even remotely interested in social media and/or digital marketing, you surely noticed that Instagram has a brand new, shiny feature: Reels. It’s Facebook’s answer to the industry’s platform of the hour (and days, weeks and months), Tiktok. Can Facebook use Reels to thwart TikTok’s uber growth? I did some digging and here’s my personal take.

I’d like to start off by giving all of you who’ve tried to stay clear of the reports and coverage of the new format a brief synopsis and the essential 411: Reels are short-form videos, no longer than 15 seconds and are accompanied by a music track of the user’s choosing. They can be made in story camera mode, where there is a Reels tab at the base of the screen. Until this week, the format was only available in Brazil (the demo to the November 2019 launch is below; Reels began testing France and our homebase of Germany just yesterday (As far as I can tell, it’s the first time Instagram has ever tested such a central feature in Germany).

Users come across published Reels at four different places on Instagram: First, there is a dedicated tab right on user profiles (similar to IGTV), where the entire collection of a user’s Reels are available. Furthermore, there is the option of posting a snippet of a Reel in an Instagram Story or in the normal feed. Reels are also embedded at the top of the Explore page, where Instagram’s search function is housed; here you can find Reels from users who are not among your followers. 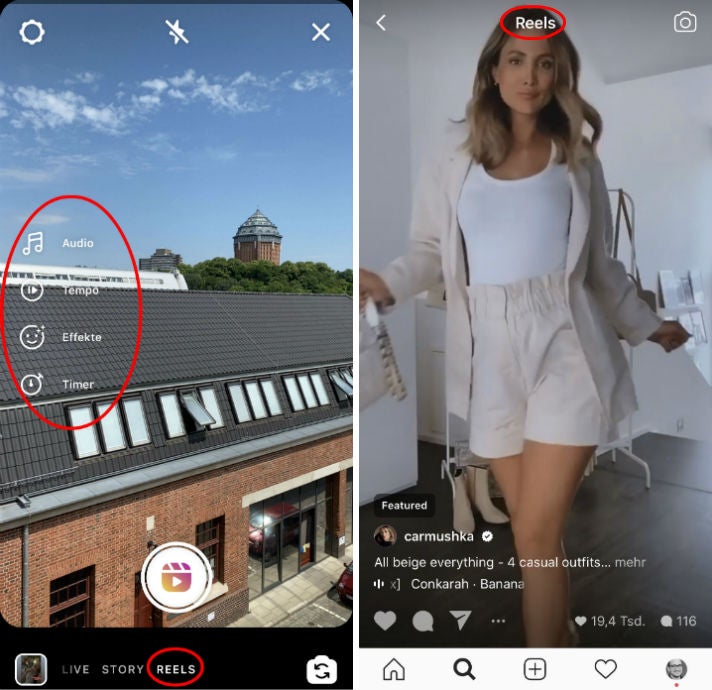 To the left, you see how Reels appears in the Story camera. Users can choose a piece of musical accompaniment, add effects to the recording and alter the playback speed. To the right is a Reel published by German influencer Carmen Kroll, aka “carmushka.”

After spending a night playing around with Reels, exploring its exact integration into the mother platform and checking out what the fledgling format can do, I wanted to share with you my initial impressions and observations: It’s incredible just how unrestrained Instagram is copying TikTok with Reels. It would appear that the higher-ups at Insta steadfastly refused to entertain the notion of adding anything close to innovation or features that would set Reels apart.

Reels has the same basic feature set Tiktok videos does—albeit with fewer editing options than its Chinese competition. This impression is further solidified through the influencers and content that was “created” over the past few weeks in preparation for the launch of Reels. The first time I scrolled through the Reels feed, I recognized the majority of what I saw, songs, memes and challenges, had just been transferred over from TikTok essentially verbatim.

The various locations where Reels are embedded in Instagram: (from left to right) a dedicated tab, on the Explore page and in preview mode in Stories

Will Reels be a success for Instagram—and thus undercut TikTok? To better answer that question, it’s worth taking a look back before we move forward. It’s not the first time that Instagram has copied a central feature from a competitor. One very prominent and very successful example its, for all intents and purposes, 1-1 copy of Snapchat Stories Instagram published in August 2016. In no time at all, the number of users on Instagram Stories surged past those on Snapchat. The tempo with which the ad revenue that Stories generated for Instagram grew, was also unprecedented for any digital platform. 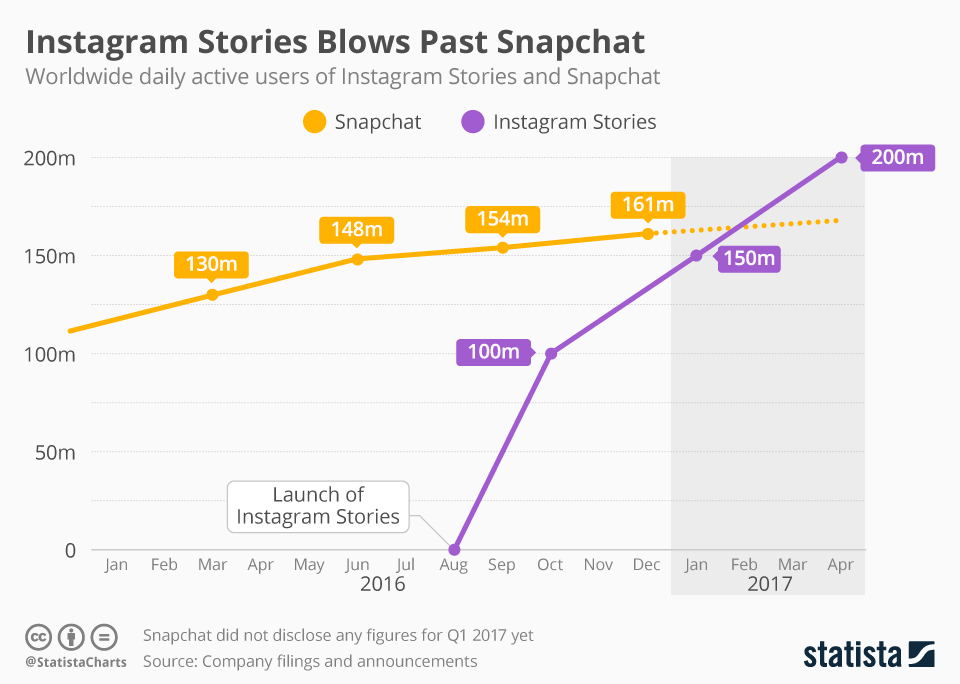 Here we have to mention a very big but. Prior to Reels launching in Germany, I would have thought that Tiktok had already reached a critical mass that would have prevented Instagram from trying such a stunt. While I don’t want to say I was completely wrong, I am, however, after taking a closer look at the integration of Reels in Instagram and giving it some thought, no longer certain that TikTok is completely safe.

One of the most fundamental reasons that Instagram was more successful with Stories than Snap was had to do with the fact that Instagram was much more liberal in its distribution of reach. Initially, Snap was very limited in its “Discovery” options for users and their stories if you were not connected to them personally (at least that’s how I remember it), something which was apparently due to the fact that CEO Evan Spiegel did not want to water down the fundamental value proposition he envisioned for the platform, i.e. a private and secure messaging. Therefore, nearly the only way to really achieve any kind of viral effects on Snap was through word-of-mouth—like DJ Khaled managed to pull off with his legendary jet ski story.

The key to Stories’ success

Correspondingly, Instagram is a platform that was designed to enhance reach from its infancy. On top of that, Stories was and is THE feature on Instagram for users to be showcased directly above the feed. Thus, Stories did and do represent an attractive feature for Influencers to win back their organic reach that the feed’s algorithm continues to limit.

Is Tiktok’s time up?

What does this trip down memory lane tell us about Reels’ prospects? On Tiktok, users can already amass a ridiculous amount of reach: impressions in the 7 to 8-figure range are nothing rare.

The mitigated value of TikTok followers

Now, there is a follow function on Tiktok. However, the majority of content is consumed on the “For You” tab, where users land when they open the app and on which the most viral of videos (somewhat personalized based on previous activity) are played. To see the videos a specific Tiktok account that you follow has published, you have to tap the “Following” tab at the top of the screen.

This makes followers for influencers on Tiktok less valuable per se than they are on Instagram. On Tiktok, users have to re-earn the most relevant reach each and every time they publish new content. To phrase it to the extreme: Users have to start from scratch with each new video.

That figures to explain why some Tiktokkers keep trying to convert their TikTok viewers into Instagram followers. They post pranks and other such videos that pique viewers’ curiosity and then add a CTA along the lines of “get the rest on my Instagram account.”

The feeling I get is that if you, as an influencer, have created a healthy, large and engaged community on Instagram, providing them with regular content that they are interested in and engage with and use features and formats that Instagram is pushing at the moment (recent examples include Stories, AR lenses and IGTV), you can reliably generate massive reach despite the limits in organic reach in the Feed.

And that could be a significant factor for the success of Reels, one that could conceivably make it more attractive to creators than “Tiktoks.”

Luring influencers with “The Holy Grail”

In addition, Instagram hopes to use very prominent placement to convince influencers to produce their own Reels. Since yesterday, this brand new format has been featured at the very top of the Instagram explore page in Germany. Getting onto the Explore page lately has been something akin to the Holy Grail for influencers and the operators of viral accounts on Instagram—and that’s because it was and continues to be one of the best ways of acquiring new followers and to increase marketable reach.

Today, Instagrams Tiktok clone Reels has been launched in Germany in France. If your from another country where #instagramreels hasn’t been released yet, I made a quick and dirty video to show what it looks like and how it is integrated into Instagram. pic.twitter.com/UnTOor9mg8

Carmen Kroll, alias “carmushka,” a very successful German influencer (960k followers on Instagram) and entrepreneur, came to a similar conclusion in a recent article she published on LinkedIn (in German)“Similar when it comes to content, not on par with Tiktok’s viral levers, but much more predictable,” Kroll writes about Reels. She sees the fight between Tiktok and Instagram being decided not by the creators, but by the brands. “Wherever the most lucrative campaigns are is where the upper echelon of creators will be in the long-term—and in my view that is clearly Instagram.” It must be pointed out, however, that while Kroll has the aforementioned 960k followers on Instagram, she only has 46k on TikTok.

Does Tiktok need the Insta-fluencers?

What does TikTok have going for it in the battle for the most-successful short-video platform? On the one hand, there is the apparent advantage of the user interface and user experience designed solely with short-form videos in mind. Users open the app and don’t need to do anything further; they immediately find relevant content for them. When I began incorporating TikTok into my daily evening routine out of professional interest, it happened more than once that I spent over an hour on the app without realizing it.

Furthermore, new influencers have gotten their start on Tiktok. Sure, most of the successful TikTok influencers also have an Instagram account. But in the past few weeks, it was more the “big” Instagram influencers who had set up a Tiktok account. Even teeny sensations Lisa and Lena have come back to TikTok—big news for brands as the duo have 15m followers on Instagram and had the biggest TikTok account with 32.7m followers before deleting it, in addition to international star power and reach.

What can Tiktok undertake?

The next few weeks figure to show if and how Instagram is able to slow down the TikTok train, at least a little. One way for TikTok to fight back against Instagram’s endeavour could be to find a way to make followers more valuable for influencers without damaging the user experience.

Further reading on this topic
Talk of the town
Roland Eisenbrand & Scott Peterson19.3.2020