Founded in 1925, Volmary is expanding its traditional business model to the digital—and B2C

Year for year and week for week, seed producer and seedling grower Volmary from Munster, Germany has seen its goods blossom at farmers markets, on florists’ shelves and in other outlets around the Fatherland and beyond since its founding in 1925. Now, nearly a century later, Volmary is leveraging its status as the market leader in Germany to lay new roots in the digital space and make hay while the sun’s shining. We spoke to Volmary to find out how the company is sowing seeds for future success with gardening videos, newsletters and an expanding B2C business.

Each year, Volmary produces roughly 500 million seedlings on an old horse ranch in central Germany, plus a plethora of seeds and cuttings ready for rooting. The business has been in the family since its founding in 1925 and is the market leader in the country. From indoor and outdoor flowering plants to sweet potatoes, rosemary and tomatoes, Andreas Duck, marketing director at Volmary, was quick to point out in a conversation with OMR that it’s not just the end that sets Volmary apart. “We have developed a proprietary genetic structure,” says Duck. What he means is that at production centers in Germany, Kenya, Turkey and Portugal, Volmary cultivates its unique new varieties and sells them via their catalogue and online shop to small and large-scale nurseries, market gardens and other outlets. With its own line of products, as well as third-party goods, Volmary generates annual revenue in excess of EUR 100m.

So, how exactly is the business model set up? For Volmary there are two distinct B2B areas. On the one hand there is the traditional way of doing things, where nurseries buy seedlings, cultivate them into fully grown plants and then sell them directly to end customers,” says Andreas Duck. Then there are co-ops with other outlets, like with home improvement chains, who, for example, want to sell tomatoes in the spring, i.e. out of season. “For such co-ops, we analyze current trends and look for ways of incorporating our new seedlings into clients’ outlets. Once we’ve decided on what special, non-seasonal items would be attractive to their customers, we look for a producer. Then we provide them with the seeds and they are commissioned to cultivate and deliver them as a finished product to the partner outlet,” says Duck. 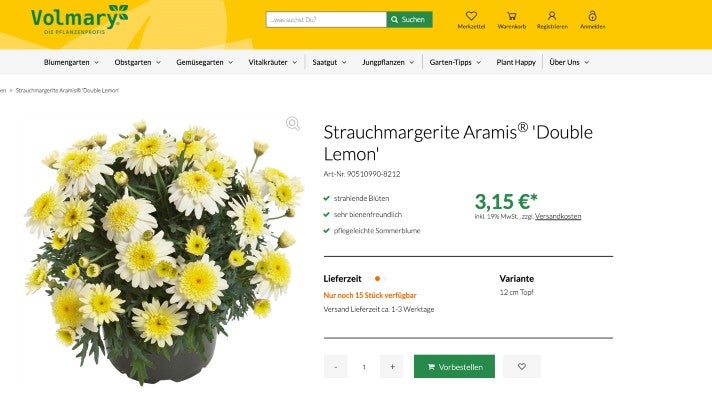 These daisies are a current best-seller in the Volmary online shop. Source: Volmary.com/Florian Heide

There are also nurseries that acquire Volmary’s seeds and sell them in generic, no-label black pots. “That was the catalyst for our idea to expand beyond the traditional business, to not only invest in B2B, but to also increase our brand awareness. That’s how we came up with the “V-concept.” This concept lets partners not only acquire the seeds for their end greenery, but also pots and labels that correspond to the primary color of the end product. “The V-concept increases the awareness of our brand among end customers,” says Duck. The increased brand awareness makes it an easier sell for retailers. “Our ideal scenario is when a nursery purchases the all-inclusive package, Volmary seeds, pots and labels. They then only need to ensure that the plants grow properly.”

That heightened brand awareness as a seed and plant producer would be enough to make Volmary unique in the gardening space, but they’ve also gone a step further and set up a DTC segment with Volmary.com. Originally for business customers, end consumers can purchase the entire line of Volmary products without the middleman. To prop up the digital division, Volmary set up a host of content marketing channels, the top performer of which is the YouTube channel. The YouTube channel has a variety of videos featuring product manager Volker Schevel providing practical tips on how to maximize tomatoes or which fruit trees are suitable for home balconies.

Additional content formats include quick tips and aimed at creative green thumbs; they generally generate impressions in the 5-figure range. Videos are produced at Volmary HQ anywhere from 6 to 9 months in advance. “We’re now making Christmas star videos with next year’s in colors,” says Duck. He says that while they are unable to see a direct correlation between the success on YouTube and end sales, but anecdotally, at least, “more and more nurseries are approaching us and directly asking for the V concept,” Duck says.

In addition to the Youtube channel, there is the Volmary blog, where once or twice a week original content appears, typically things like Christmas crafts tutorials or how to make your own teas. Volmary also has a newsletter featuring the latest blog content pieces, to which about 13,000 currently subscribe.

Then there is the Whatsapp newsletter, for which there are approximately an additional 10,000 subscribers, according to company figures. Duck says that the newsletter has a tangible impact. “When we send out a newsletter, the products featured see an uptick in revenue between 1500 and 3000 euros within the next 24 hours.” Not bad when you consider that many items only cost between 3 to 5 euros each.

Although Volmary has a solid community on Facebook with 121,000 followers, Pinterest is much more important when it comes to promoting its own content. The Volmary Pinterest account generates an average of 5 million impressions per month and there are new daily pins published as stories. The top-performing content piece? Duck says it’s a recipe for the “perfect omelet,” says Duck. “5000 people watch it every week, even though it’s three years old,” says Duck. The role of such recipes in the cross-marketing strategy, just like other pins, is to drive traffic to the Volmary blog.

Duck says that influencer marketing is an absolute rarity, despite the fact that the company puts on a yearly get-together for gardeners, where professional horticulturalists meet up with gardening influencers (like Sandra Jägers). Beyond that, Duck says that they do not engage in influencer campaigns. Except for that one time where Gustav, the drummer from German band Tokio Hotel approached them about a co-op. “We went to his place, checked out his garden and then started with the planting.” It’s worth pointing out, however, that Gustav didn’t promote the Volmary brand in his story, but the tomgarten.de online shop, the B2C brand that was recently revamped by new CEO Josephine Volmary, who hopes it evolves into a new revenue stream. 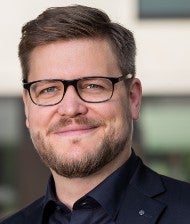 Tomgarten is an online shop, which was originally born in a partner logistics company. Today, it’s the second own brand in the Volmary online shop. As a platform, it houses all manner of topics pertaining to home gardening and its target group is end consumers. The shop sells seeds, the right kind of soil and gardening equipment.

Volmary sources the products for Tomgarten that it does not produce itself from other retailers. “This allows us to provide hobby gardeners with a complete portfolio for everything they need gardening-wise,” says Duck. The advantage it has compared to the Volmary shop: “Horticulturalists only need seeds once or twice a year, but are in constant need of fertilizer, pots or soil for raised beds,” says Duck. “We can provide them with those kinds of products through Tomgarten.

The entirety of Volmary’s B2C efforts currently only amount to roughly 2% of Volmary’s total annual revenue, but half of all the items ordered through the Tomgarten shop are Volmary branded items. Proving that they can sell their old products rebranded to end customers.