The US tech landscape is peppered with social audio startups

Tiktok, Instagram, Snapchat have two things in common: 1) they recently became social app juggernauts and 2) the user experience on these platforms revolves around visual content, i.e. videos or images. Clubhouse has bucked this trend, making waves stateside in recent months for its platform based on audio chats. According to media reports, the operators of Clubhouse have received USD 10m from famed US VC firm Andreessen Horowitz—based on a USD 100m valuation—putting Clubhouse atop a very, very long list of new “social audio apps.” Today, we’re diving deep on social audio, explaining the core functionality, highlighting the major players and unearthing the back story to the latest tech trend.

“If Snap is the camera company, (Before its IPO, Snap referred to itself as a camera company, note by OMR), Cappucino is the microphone company,” Gilles Poupardin said in an interview with Marie Dollé in her newsletter “In Bed With Social.” Poupardin is the founder of Cappuccino, a social app that lets friends and acquaintances connect and chat in audio form. With Cappuccino, users can record 1 short audio clip per day (these audio memos in the Cappuccino universe are called “beans”) of “a life update, joke or idea.” All the recorded beans in your network are taken to brew your daily Cappuccino. “A daily personal audio show featuring your friends,” as the company itself writes, that can be played every morning at 8 am.

Hi, I'm working on a fun app to feel closer to your friends & family. You can record short voice memos ("beans") and every morning at 8am, you get your "Cappuccino" (mix of your friends' beans with music). It's like a mini-podcast with your friends/family. pic.twitter.com/wXRMNa3HKZ

He told Marie Dollé that he witnessed the rise of podcasts and wanted to develop a less polished, more intimate format. Poupardin and his Cappuccino co-founder Olivier Desmoulin hail from France and the pair were a part of the 2016 Y-Combinator class, the renowned US startup accelerator, with their previous startup Whyd (originally conceived as a “music-streaming-social-network, before pivoting to “connected speakers”).

Their latest project, Cappuccino, first made waves in the tech scene just last week, as industry influencer Chris Messina (“inventor of the hashtag,” 105,000 followers on Twitter) featured the app in software and gadget community Producthunt; Producthunt founder Ryan Hoover (approx. 150,000 twitter followers) tweeted positively on the app and Cappuccino was selected as the third-best product of the day on Producthunt.

More than 40 companies are in the “Social Audio” game

Then, Cappuccino was featured in the massive Producthunt newsletter. “We’ve seen an increase in audio products launch on Product Hunt this year. In-person encounters have been harder to maintain with social distancing in place, but social connections are more needed than ever. Makers are finding creative ways to use audio to help us remain connected, and creating more intimacy through audible stories.

Marie Dollé, too, who is active at investment bank Bpifrance) has been monitoring the social audio trend and published a map of the social audio landscape in the aforementioned “In Bed With Social” newsletter; there are currently 41 companies in Dollé’s map. 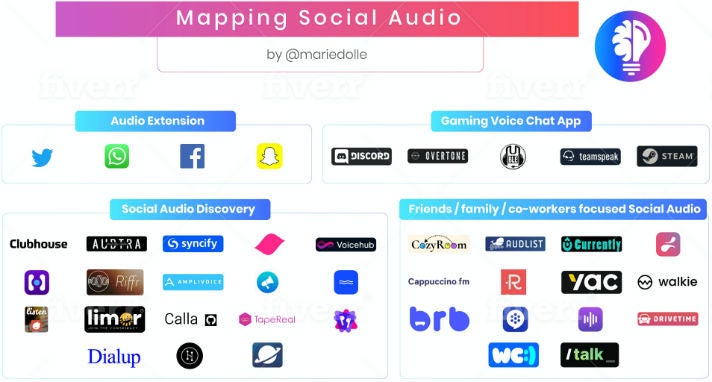 (Source, In Bed with Social)

The social app who’s made the biggest splash and generated the most attention in the past few months figures to be Clubhouse. But as Clubhouse is currently in closed beta testing, only users participating in the test know just how Clubhouse works. Judging by media reports and social media posts, users can open and invite each other to join virtual rooms, where they can engage in audio discussions with one another. The environment is supposed to lend itself to spontaneous, unexpected and inspirational conversations, much like at an “offline” party.

One of the catalysts for the app’s success figures to be its exclusivity. Clubhouse founders Paul Davison and Rohan Seth, who were previously at Google, Pinterest and VC firm Benchmark, are incredibly well connected in the US VC and tech scene and appear to have made use of these contacts to invite select individuals to join the app initially. The strategy began bearing fruit in April as word-of-mouth from one of the few, first and very-well connected Clubhouse users began generating awareness on Twitter. April was also the first time Clubhouse appeared on Techcrunch.

From Oprah Winfrey to Mark Cuban and Virgil Abloh

In mid-May, Forbes announced that Andreessen Horowitz invested USD 10m in Clubhouse on the heels of a USD 100m valuation and ponied up an additional USD 2m to acquire shares from the two founders. Andreessen Horowitz won a bidding war over competitors Benchmark, another major VC firm. It bears repeating here that the app at this time is not yet available to the public for download and thus only has a couple of thousand users. Pieces on Clubhouse begin appearing soon after, e.g. in the New York Times and the Wall Street Journal.

When will the app open up the Clubhouse doors to the public?

In the meantime, Clubhouse has had to overcome its first controversy: some individuals of the VC scene took to the app to begin criticizing the journalistic coverage of startups and the power that journalists have in the app; one of the individuals (who was not connected to Clubhouse) then led a defamation campaign against Taylor Lorenz, the very New York Times journalist who first reported on Clubhouse.

Clubhouse founder Paul Davison stayed out of the conflict initially, but later added in a blog post that the company is in the process of drafting comprehensive community guidelines. Davison also stated in the post that he did not foresee opening up Clubhouse for the public at large in the immediate future. He wrote that on the one hand it was important to grow communities slowly, rather than 10x-ing the user base overnight, and on the other hand he stressed that they were a small team and had not yet finished building the features that will allow them to handle more people. Nevertheless, Clubhouse will be forced, sooner or later, to reconcile with the dichotomy of retaining the app’s exclusive character but doing so at scale.

Find someone that looks at you the way VC’s look at social audio platforms. https://t.co/hwj9h4jVKU

The next aspiring social audio platforms are waiting

Thanks to the large sums in play during the Clubhouse funding round, the rest of the US tech and VC scene figures to have at the latest now taken note of the Social Audio trend. The next wave of apps is ready for launch, as well. TLDL (“Too Long, Didn’t Listen”), an app that intends to place a “social graph” atop all podcasts available just launched. TLDL lets users mark and share their favorite portions of a podcast and to scroll through a feed of podcast highlights from their network. The makers of Muze (which counts Snap as an investor), launched a waiting list to the app which is said to add audio comments to online videos. And Roadtrip (tagline: “Listen, talk, chat and build playlists with friends, live”) just launched closed beta testing; Roadtrip lets users open rooms where they can create Spotify playlists with others and discuss music with other people.

What are the reasons behind the current social audio boom? There is strong speculation that a culmination of factors from the past few years could be beneficial for the new digital format. Headphone and earbuds have become ubiquitous; Bluetooth-based offerings, like Apple Airpods, have integrated microphones and one startup, originally named TTYL (Talk To You Later) wanted to create a Walkie-Talkie-based platform (article in German); the concept and the name of the company have since changed.

Then there is the podcast boom. As podcasts enjoy their current renaissance, audio-based content has massive reach and users are simply accustomed to audio formats. Last, but not least, digital voice communication has become commonplace, propelled by, among other things, voice messaging and telephone calls via messenger platforms like Whatsapp.

The final factor in the rise of social audio is gaming. Apps like Teamspeak and Discord, which let users communicate with each other, also while playing, have an immense userbase. According to Forbes, Discord collected an additional USD 100m thanks to a USD 3.5b valuation. Recently, the company announced in a blog post that it was increasing efforts to acquire audiences outside of gaming and has since then positioned itself as “your place to talk”.

The best "social audio" apps have been designed around activities:

Excited to see how this evolves in other areas like fitness, education, travel, etc… https://t.co/ORB5Yx13F6

It remains to be seen if social audio is an easily copied featured that the major platforms could then integrate (similar to what Instagram did with Stories and Tiktok videos. The big platforms are already conducting social audio experiments: In May, Facebook released the audio-based group chat app Catchup in the US app store. And Twitter announced in June that it was looking at rolling out audio tweets for users of the iOS app.