In the OMR Podcast, Sorrell discussed Walled Gardens, growth opportunities outside of the big four and Brexit

Sir Martin Sorrell turned his company WPP from a shopping cart manufacturer into one of the largest advertising holding companies on the planet. After 30 years at the helm, Sir Martin stepped down as WPP chief—and launched WPP competitor S4 Capital just a short time later. In the OMR Podcast, Sir Martin talks about how he plans on scaling up his new baby, what advertisers can do in a world of walled gardens and his impressions of the digital marketing world at present.

In April 2018 Sir Martin Sorrell vacated his post at WPP after 3 decades in charge amid alleged personal misconduct and misuse of company assets. But if you thought the 73-year-old would fade off into the sunset of retirement, you would have been mistaken. Six weeks later, in May 2018, he snatched up Derriston Capital and transformed it into advertising holding company S4 Capital. After acquiring digital agencies Media Monks (for USD 350m) and MightyHive (for USD 150m), Sorrell’s new company already has a market capitalization of USD 600m and employs 1200.

“Our motto is ‘faster, better, cheaper,'” says Sorrell to Florian Heinemann in the OMR Podcast, who stood in for OMR founder Philipp Westermeyer. “Faster simply means being active 24 hours a day, better stands for using technology aggressively and cheaper means efficiency.” Sorrell went on to say that S4 is strictly pursuing a digital agenda and seeks to only acquire digital agencies.

“Walled Gardens are dominating digital business at present. Their reluctance to share data is increasing,” says Sorrell. Something he says he completely understands, especially against the backdrop of the current debate on data security. “With the advent of the internet and the demise of local businesses, many brands saw an opportunity to create direct client relationships for the first time. Platforms, however, have driven a wedge between brands and their customers,” he says. As prices increase, there is added urgency for brands to advertisers to amass their own data pool. 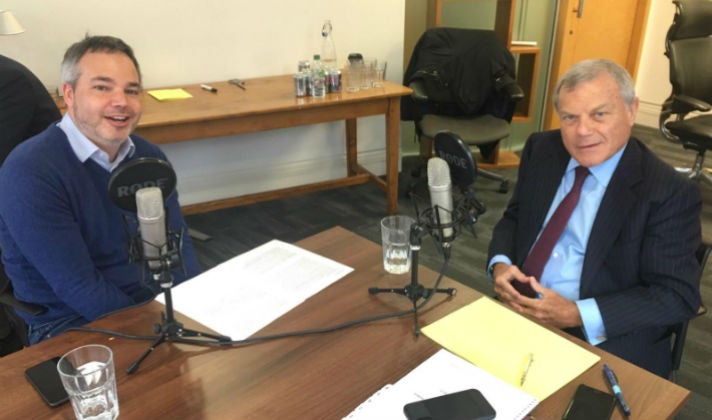 “The biggest battleground at present is in the control of data”, says Sorrell. “There is a somewhat unfortunate Brexit analogy here. One of the slogans was “Take back control.” And that is exactly what many advertisers want to do.” S4 Capital stands for this model exactly, as the purchase of MightyHive shows. The agency supports companies in performing agency tasks in-house. The whole principle of S4 Capital is based on developing first-party data content and media sales with clients. “When I left WPP, I looked to see in which areas revenue was growing. And those were first-party data, digital content and digital media planning–exactly those areas we are pursuing now,” says Sorrell.

When Sir Martin Sorrell discusses the major platforms, he’s not referring to the big four GAFA companies (Google, Amazon, Facebook, Apple), but the Fearsome Five of Google, Facebook, Amazon, Alibaba and Tencent. And although the biggest digital platforms split the lion’s share of digital revenue among themselves, his aim with S4 is not to create a competitor. “We do not seek to steal margins from Google and Facebook. We aim to stimulate the use of digital media—regardless of the channel that works best for our clients.”

To hear more on what Sorrell had to say about China and its platforms, his opinion of the largest advertising holdings and why he thinks Microsoft is getting it right at present, check out the new OMR Podcast.

The OMR Podcast with Martin Sorrell at a glance: