OMR takes a deep dive on the high flying app

An app launches with next to no fanfare, plods along for three years and then suddenly shoots to the top of the app charts in numerous countries. Vero’s success could be complete coincidence—but could it also be down to a solid marketing and targeting strategy? OMR took a deep dive on this high flyer and discovered that right before downloads really shot through the roof, hundreds of niche influencers got on their social media soapbox on Instagram and other platforms to plug Vero—many of whom stood out through their creative exploits. Many others through their choice in fashion, or lack there of.

A brand new social network that sorts its content feed chronologically and forgoes ads completely, and aims to monetize primarily through subscriptions. Anyone who has even a remote interest in tech topics, figures to at least once have come across such an app description in the past few days and weeks. Vero was suddenly the talk of the town.

It’s not a case of a brand new startup filling a market niche with an innovative product either, as they launched the app back in 2015 and struggled mightily to gain traction. But within the past few days, downloads exploded to the top of the charts. Priori Data, an app analytics tool based in Berlin, estimates that Vero was downloaded in the App Store and Google Play roughly 6.1 million times globally in the past 30 days alone. But where did this sudden change in popularity come from?

On February 26, Vero cracked the top spot in 11 countries in the Apple App Store, including USA, Canada and Australia. In Germany and the UK, it ranked second. (Source: Priori Data)

The man behind Vero is Ayman Hariri, a Lebanese billionaire and son of former Lebanese Prime Minister. His net worth is valued at USD 1.33 billion, private funds with which to push the app that only a very few have.

The first order of business was for Vero to convince famous pop stars and filmmakers to post exclusive content on Vero. The most famous of the bunch? None other than Hollywood heavyweight Zack Snyder, director of such blockbusters as “300,” “Watchmen,” “Man of Steel” and “Batman v Superman: Dawn of Justice.” Snyder began posting set pics to his Vero account from the upcoming picture “Justice League,” which is a hot topic among comic fans and getting tons of publicity in blogs and in forums like Reddit. Furthermore, Snyder produced an exclusive short for Vero using his iPhone. Snyder and Hariri know each other ever since the Billionaire “won a charity action for a walk-on role in Snyder’s Batman V Superman: Dawn of Justice.” If you want to follow Snyder and his exploits on Vero, you need the app, as there is no web interface.

Filmmaker and cameraman Max Joseph, who’s been active on the platform for just about a year, Joseph (also a good friend of big-time influencer Casey Neistat) played a leading role in the MTV series Catfish. In early 2017, he published a several-part documentary on Vero entitled “Dicks,” which focused on egocentric directors.

Niche influencers instead of creative types?

Another exclusive content creator for Vero is Hollywood set photographer Clay Enos his credits include “300” and “Wonder Woman,” and Canadian musician and social media star Chris Collins. In January of this year, Mark Waites, co-founder of notorious British ad agency Mother, produced an exclusive short for Vero, while in February British comedian and actor Asim Chaudry posted a short of his own.

But still all this exclusive content from big-names would not have been enough to create the necessary snowball effect to catapult an app not only into the mainstream, but also to the very top. And though February 2018, Vero was still stuck way down in the app store rankings. So, what change in strategy gave help them bust through?

An exclusive report by Instagram analysis tool InfluencerDB, made available exclusively to OMR, shows that the amount of Instagram posts by influencers (in this case accounts with at least 15,000 followers) with #vero exploded in late February. 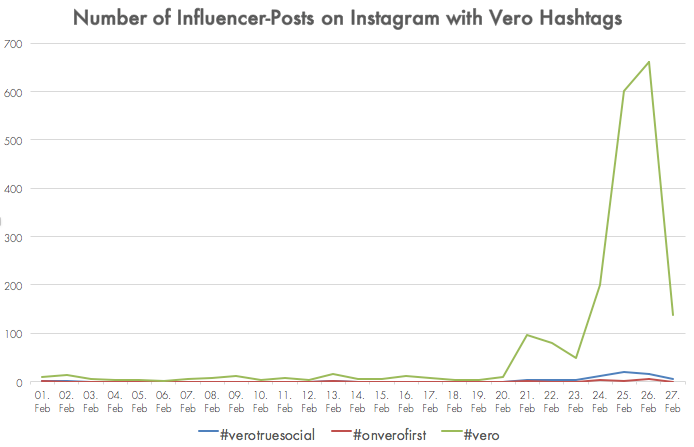 The total amount of followers (i.e. gross reach) of all influencer accounts on Instagram who posted between February 20 and 25 using #vero numbered 70.7 million. This figure does not contain additional posts by influencers with the Vero name but not as a hashtag. On February 26, the app reached number 1 in the iOS app store for the first time in the USA. When analyzing which posts using #vero generating the most likes and which accounts have the most followers, it becomes clear that creative individuals, illustrators, photographers, makeup artists and tattoo influencers, generate the most engagement.

Influencer posts on Instagram using #vero with the most likes

Where did the snowball effect start?

It is well within the realm of possibility that many of the posts instrumental in Vero’s fame are no longer available. Chris Messina, a known player on the US scene thanks to his work with Uber and Google, stated on Twitter that he feels Vero leveraged its success primarily through Instagram Stories, posting several examples . of short videos that disappear after 24 hours if users do not explicitly archive them.

The chart shows that many of the Instagram posts with the largest reach were published on February 26, right when Vero’s hype was nearing its apex. Which accounts posted between February 20 and 23 on Instagram to help Vero bust through? Speaking of busts …

The Cosplay scene goes all in Vero

InfluencerDB found 192 Influencer posts with #vero in the aforementioned 4 days. The accounts all have one thing in common: half-naked, female “Cosplayers,” plugging Vero right before the app went viral. If you don’t know, Cosplay originally comes from Japan and consists of dressing up like characters from manga, anime, comics, movies or computer games—female cosplayers tend to be very skimpy in their choice of attire. Fetish and tattoo models also start beating the drum for Vero with semi-nude pics. Some examples:

I’m on #Vero! Follow me there, without the terrible algorithm/ads!

Lets try this one out ???? #vero #socialmedia I’m still gonna be here of course! Just want to try this out! ??‍♀️

Social media monitoring platform Talkwalker created an exclusive report for OMR analyzing tweets on Vero between February 20 and 23. Unsurprisingly, the tweets with the most engagement come from Cosplayers, six of whom are female.

Tweets on “Vero” ranked by engagement

Facebook, too, has its share of models in skimpy clothes from the fetish and tattoo scene plugging Vero, i.e. by Berlin based “Victoria Van Violence” (1.1K Likes). “Vany Vicious,” has over 4 million fans and posted on Vero five times—each time with a very suggestive image.

Apparently #Vero is the new 🔥 so go give me a follow over there . I’m already loving some of the features they have that Instagram doesn’t offer 🤘🏻

Did Vero open its very deep pockets to pay niche influencers to generate an artificial hype? It is impossible to say definitively one way or the other. Our research found no posts on Vero that listed #ad or #sponsored. Editor-in-Chief of German digital publisher t3n, Stephan Dörner, took to Twitter to ask several Influencers in a random test if they were paid by Vero. Every single one of them answered, “No.”

And without a doubt there are several factors that could have helped propel Vero to the top organically—one such factor being the increasing amount of displeasure with Instagram’s algorithm. Especially those producing complex, time-consuming content, like photographers and illustrators, are incensed at sharp decline in engagement and reach that changes to the algorithm have brought about. By promising to sort the feed purely chronologically, Vero has welcomed the group of malcontents with open arms.

Y'know, a lot of artists had their businesses get screwed by IG's algorithms, so it'd be really great if folks could stop shitting on ppl for trying out Vero as a possible alternative. If you don't want to join, great, but why make others feel bad about trying it?