The Fortune Teller, the Fitness Queen and two publishing heavyweights 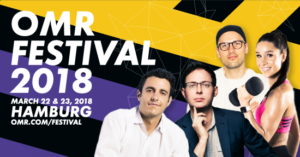 40,000 attendees. That’s our goal for OMR18. To reach it, we’re literally going to reach for the stars. Our star-studded speaker line-up for March 22 & 23, 2018 in Hamburg is slowly starting to take shape. Today is announcement number 1: speakers and what’s in store at OMR18.

With some 40,000 people in attendance, we’re gonna need some serious room—that’s why we’ve earmarked 5 Halls for this year’s Festival—an OMR first. That’ll give us 65,000 square meters of floor space for you to network, learn and meet among 300+ top-name exhibitors. On both Thursday and Friday, too! Plenty of time to explore everything the Expo has to offer without feeling rushed. What’s not new, however, is the Festival highlight on Friday: The OMR Conference with the absolute best in international speakers.

Tim Urban (Wait But Why) – He’ll tell you about one of the most unusual success stories in publishing in the past few years: Tim Urban and his two cohorts, Andrew Finn and Alicia McElhone, have built up a readership that numbers in the millions although they only rarely publish. On “Wait But Why”, Urban, a major proponent of procrastination as an ethos, releases a new article “whenever they’re finished.” A closer look, however, reveals that the articles are profound, long and typically include a massively popular stick figure animation as an explanatory video. The articles generate a massive amount of engagement and oftentimes go viral for long periods at a time. What helped prople the blog and Urban to popularity was a 4-part series in 2015 on the world of Elon Musk—with the help of Mr. Musk, who’s an avid Wait, but Why fan. A few months ago, part 5 was released and was promptly shared over 8000 times on Facebook and Twitter.

In total, Wait But Why has over 400,000 Facebook fans, more than 142,000 Twitter followers, 50,000 Instagram subscribers and 560,000 newsletter subscribers. Urban and his small team generate revenue via its small Wait But Why store. Her you can find stuffed animals designed by Urban, posters, coffee cups, cell phone cases and clothes. In addition, some 4500 people support them with donations through Patreon and by buying eBooks. Each blog post can be purchased as an eBook for a couple of bucks and then read on your personal eReader. Which is good when you consider that Urban’s Elon Musk articles come in at over 500 pages.

Kayla Itsines (The Bikini Body Training Company) – there are many fitness Instagram stars in the world, but no one has come close to achieving the same business success as Kayla Itsines.The 26-year old Australian and her husband Tobias Pearce have made millions through the sales of her fitness and nutrition program. She keeps her 7.7 million subscribers on Instagram and 15 million Facebook fans engaged and active by soliciting before and after pictures from members of her community. If you want to appear on her channel, just post a pre-training regiment pic with the corresponding hashtag. Right now, there are over 6 million posts on Instagram with the hashtag #bbg (the abbreviation for Itsines workout course “Bikini Body Guide”).

Her following is so large that she holds live training sessions around the world attracting thousands—most of which are sponsored by brands or media partners like Glamour. With her app, “Sweat With Kayla,” she has a subscription model that figures to be more lucrative than her previous model, selling eBooks of her workout program. Now, her fans pay for the workouts on a monthly basis. On the OMR stage, Kayla and her husband Tobias Pearce will shed some light on how they achieved such incredible growth.

Nate Silver (FiveThirtyEight) – Data is the most important currency in digital marketing—and no one knows how to better put it to use than Nate Silver. He’s been the most famous data analyst in the world since he accurately predicted the results in 49 of 50 states in the 2008 US presidential election. One year later, Time Magazine listed him as one of the 100 most influential people on the planet. He leveraged his celebrity to build his business. In 2010 he integrated his data analytics blog FiveThirtyEight, which he had only founded 2 years prior, in the New York Times’ website. In 2013, US sports giant ESPN purchased the blog and Silver has been building his own online presence.

According to Similar Web, his blog nets 15 million visits per month. On election day in 2016 the site was visited by 16 million users. At the OMR Conference, Silver awon’t be discussing too much about politics, but primarily on the current possibilities of data analysis and how to put them to good use for marketing purposes.

David Fischer (Highsnobiety) – It’s still not a common occurrence that a German start-up is an international success. David Fischer and Highsnobiety, however are one such success story from the fatherland. Fischer took a Berlin fashion blog and formed it into a successful lifestyle magazine that is now headquartered in New York, reaching 9 million people every month. One of the secrets to his success is that his ability to recognize very early on how to leverage new platforms into boosts in traffic and reach. At OMR Festival 2018, Fischer will go into detail on how he was able to gain 2.3 million fans on Facebook and shed some light on which new platforms he is keeping an eye on.

Join 40,000 of your closest friends—in Hamburg this March!

Take a look at the newly launched Festival page to see What’s New, to learn more about Masterclasses, Guided Tours and Side Events at OMR Festival 2018. Or just save yourself some time and go straight to the ticket page!