Thanks to some luck and some savvy deals, eight former NYU students are on the verge of being the first major brand born on Clubhouse.

Last February, as the Clubhouse hype in Europe was just kicking off, a collective of eight girls from NYC launched “NYU Girls Roasting Tech Guys.” While the hype around the social audio app has tapered off, the dating show gains in popularity by the day. And now, the ladies behind the format are on the cusp of building the first major, social-audio brand. Today, OMR takes a look at how their business and the platform are a perfect match.

Out of nowhere, it was everywhere. And as quickly as it came, it was gone again. From January through March, Clubhouse was the hottest app in Europe, with 9 million downloads globally in February 2021. Then in March, downloads came crashing back down to earth with “only” a third as many as in February. Eulogies began pouring in as companies like Reddit, Twitter and Facebook started making their own Clubhouse clones. Just a few weeks prior, lauded as a social audio pioneer, the original seemed destined to life on the margins with only the most diehard business and tech enthusiasts on board, despite its 4b USD valuation.

Belly up to the virtual dating bar

But there are a handful of influencers and business types who have not given up on Clubhouse just yet—including a troupe of 8 former NYU students who live hosted the first episode of their Clubhouse dating show “Shoot your shot” on February 10, 2021. 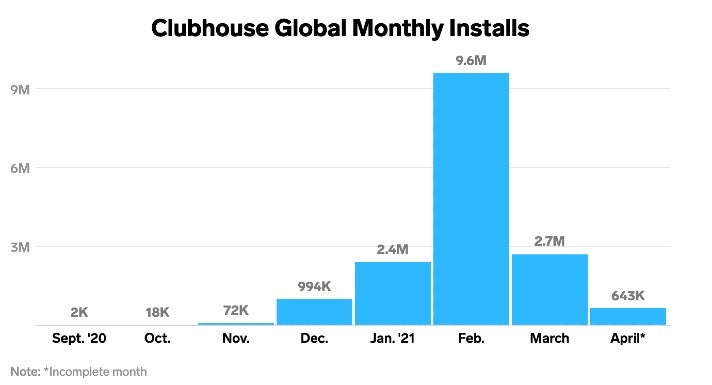 Downloads of Clubhouse have been sinking sharply in recent months. Source: Sensor Tower

In a casual bar atmosphere, people in the virtual audience have the chance to present themselves as a potential dating partner, or platonic friend. The event is very Gen-Z, the hosts are between 22 and 23, the audience is educated and primarily female. During the opening round of introductions, the girls take every chance to roast the typically nerdy disposition of the NYU dudes in attendance.

When a fail is fortunate

Speaking to Business Insider, Devin Lewtan, one of the 8 NYU students, said there was a random app malfunction during the first live event that basically caused “800 people [to get] stuck in a room listening to us talk” in February. The second event drew more than 4000 people—without the added benefit of a glitch increasing attendance figures.

Today, the “NYU Girls Roasting Tech Guys” club on Clubhouse has over 13,000 followers and live sessions take place every Tuesday and Thursday at 10 PM. Each show typically draws an audience of round-about 10,000. The sessions attract celebrity types as well, including Twitch CEO Justin Kan, New York Times author Taylor Lorenz (Here in the OMR Podcast) and Youtube star Logan Paul. The show’s success has generated significant media coverage which has led to an increase in popularity that has remained.

If you wish to participate in one of the audio events, there are some strict rules to follow. First and foremost: no networking and no pitches of any startup or deal or the like is permitted—no easy featt considering that Clubhouse is primarily the playground for business types. Seth Rosenberg, an investor at Silicon Valley venture capitalist Greylock, was sent back into the crowd after it came to light that he had a girlfriend. “If someone tried to network, we would cut them off and throw them back to the audience right away,” Keiran Simunovic, one of the moderators told Business Insider. “It’s all about the love.”

Despite the anti-business-content attitude, “NYU Girls Roasting Tech Guys” appears to have the potential to become one of the first major social audio brands with a working business model on Clubhouse. Although there are legitimate questions about the fairness in opportunities and media coverage the “NYU Girls” have received compared to black creators on Clubhouse, who initially popularized “shoot your shot” rooms, Clubhouse has recognized the potential the girls represent. One prominent example being that Clubhouse co-founder Paul Davidson—and all five million followers of his–has joined the NYU-Girls team as a moderator. It furthermore does not seem to be a coincidence that the NYU Girls were selected to implement the brand-new payment option on Clubhouse, which permits creators to monetize their sessions by collecting “tips” without Clubhouse getting a cut.

As Clubhouse’s current chat function is limited at best, the NYU Girls set up their own web chat. In addition, they’ve entered into several different partnerships with companies relevant to their core audience, e.g. with vegan pimple patch maker Starface, pizza delivery service Slices and CBD drink maker Recess. Based off of deals other creators of a similar vein have struck in the past, it’s realistic to assume that the NYU Girls receive between 1 and 5K USD for each sponsored events. 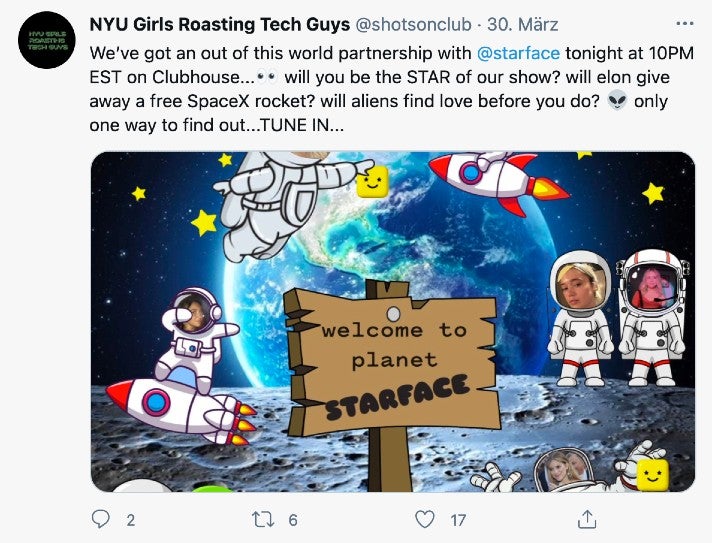 To promote their young brand, the NYU Girls have primarily focused their efforts on their Instagram and Twitter profiles. The published content here is primarily of user-focused content, like insider memes, best-of videos, retweets and regrams from users, but with announcements and promos sprinkled in, like when the ladies launched NYU Girls Merch a few weeks back. They have also boosted their profile through appearances on other shows, like on Yes Theory, a popular US Youtube format, where the NYU Girls gave dating advice. The video, published in early April, has notched over 1.3 million views.

Taking your chance on Clubhouse

With a reported valuation of 4b USD after recent Series C funding, Clubhouse has stated that it will use investor money to expand access to the app, one example of which is its recent expansion to android. Despite that move to broaden access, new users still may only register if they have received an invite from a current member. Furthermore, Clubhouse has announced additional monetization features for creators, new countries it will service on android and an accelerator program, which provides a monthly stipend of 5k USD to 20 select influencers every month, as well as other forms of support.

For their part, the NYU Girls are on record describing the experience on Clubhouse as “scrappy,” with Lewtan telling Business Insider that Clubhouse needs more creator-friendly features […] from access to analytics, chat rooms to link sharing. To track and record audience numbers, the NYU Girls resort to taking regular screenshots. Another change they would welcome is the simple ability to link to the official website in their bio and even integrate their external live chat function, since the app currently “doesn’t have a way to message other users.

WME and NYU Girls team up

It’s clear that retaining such top-tier creators would be in Clubhouse’s best interests, especially given that Silicon Valley’s tech giants are racing to build up their recently published audio-only formats. In addition to solidifying its foothold, NYU Girls primary audience is young, urban and with above-average amounts of disposable income, making them a very attractive partner for advertisers. Time is of the essence though, as according to this article by the New York Times experts “see interactive audio as an exciting area that will produce a new wave of stars.”

Social audio is also advancing beyond the most tech-savvy circles and into the mainstream with companies discovering the potential of interactive audio and its prominent voices. Last month, The Hollywood Reporter announced that the NYU Girls signed with WME, one of the largest talent agencies in the US. While top creators on Clubhouse are branching out, Clubhouse itself is at the very least exploring ways of monetizing its most-popular formats with tickets for limited-attendance events and subscription models. If these formats take hold, Clubhouse could (re)take off—and the NYU Girls would be one of the most prominent faces of the comeback.