The Nelk Boys: sophmoric frat-boy humor ready to graduate to the big time

They've grown out of mere party and prank vids and launched merch, hard seltzer and a paid community that makes millions

Love ‘em or hate ‘em, the Nelk Boys are the current kings of pranks and party videos—and have become something akin to the Jackass crew for Gen Z. Chugging fake beer behind the wheel, jetsetting to Mexico with Tekashi 6ix9ine and slinging coke to passersby, they have a knack for attention-grabbing and their brand of college humor has made them millions despite Youtube demonetizing their massively popular channel. Today, we are focussing on the business side of the Nelk boys, which has their manager harboring illusions of grandeur on par with Apple and Amazon.

As a dude from the US of A who went to college stateside, there is a good chance that a younger version of me would have been all in on the Nelk Boys. I can only assume, because at present, it is not my kind of humor. But that doesn’t matter. You don’t have to find it funny when rambunctious young bros in the their 20s hit up chicks for their digits in front of they mans, openly binge hardcore porn during college lectures or pretend to be airplane pilots, drunk af, right before takeoff (ok i may have a soft spot for that last one). The only thing that’s important for the purposes of this article is that when those videos are published on Youtube, they get views. Millions and millions of them.

Part canuck, part yanks, the Nelk Boys crew has roundabout 7 million subscribers on YT and another 4 on Instagram. They upload a new video every week, which then rapidly generates clicks in the 7 to 8-figure range. Shockingly, their fans and followers primarily consist of frat boys, who can relate to the modern rendition of Jackass-y, American Pie-y and fraternity-y humor..

The Nelk Boys started in 2010 and was founded by Canadian students Kyle Foregeard and Jesse Sebastiani. According to this report in the New York Times, they quickly began earning about 500 bucks a month from YouTube ad revenue. In 2015, they filmed a punk’d-style video of them offering “coke” to passers-by in LA. When the cops show up and cuff the boys, only to get pwdn with a trunk full of cocacola, the Nelk Boys get their big break. That video has since been watched nearly 45 million times. 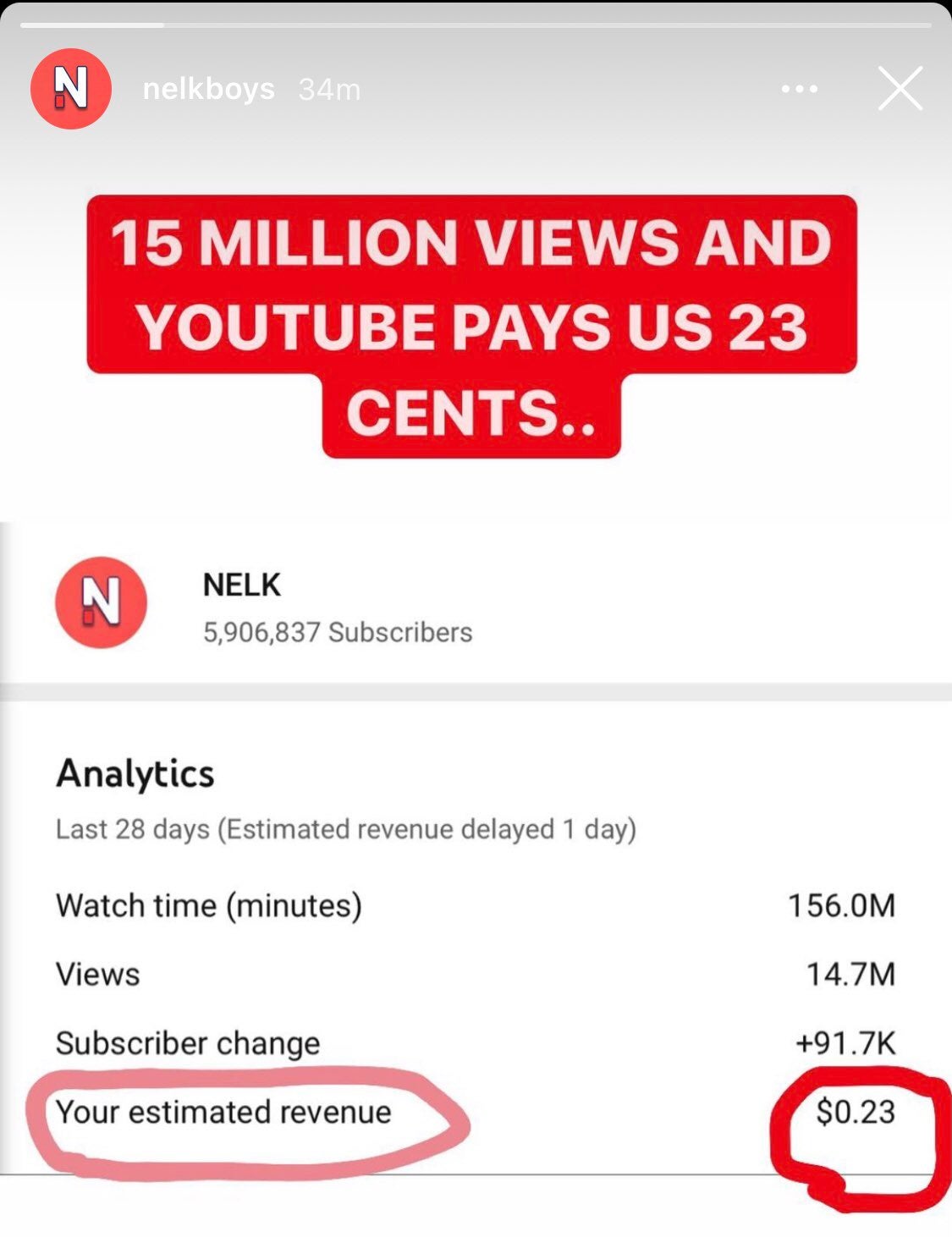 23 cents a month: despite several million monthly views, ad revenue has all but stopped for the Nelk Boys on Youtube

After the “coke” video broke, their monthly ad revenue increased to 5K—a figure that is more than 20,000-fold of what they earn today, according to Kyle Foregeard. The reason? Last May, i.e. still mid-pandemic, the Nelk Boys repeatedly called on their community to throw student parties. Youtube responded by capping their ad revenue overnight, calling their behavior a violation of its responsibilities as content creators. Ever since, the Nelk Boys have failed to crack the 1-dollar mark in ad revenue despite videos regularly netting 8-figure views.

Annoying? Yes. A development that caused the boys to have a change of heart and change their tune. Ah, no. Instead, they went all-in on their merchandise brand “Full Send” (note for people over 30: full send means all-in or full throttle). Their company Nelk Inc. is reported to have eclipsed the USD 50M mark in revenue last year. Bi-monthly, they drop new merch, including sweatshirts, mini-skirts, g-strings, ashtrays, neon lights and other items, all with the Full Send word logo emblazoned on them. They typically announce the drop on their website and on their social and the bulk of their goods are sold out within a couple of minutes.

Now no longer able to earn any money on YouTube, they have since switched to their own community platform. Taking a page from Logan Paul and other YouTube giants, they offer exclusive content found nowhere else to members of their private fan club. Members also have a chance to meet up IRL with their heroes or are automatically entered in extravagant giveaways (e.g. For a Ferrari). A monthly membership to the exclusive “Send Club” runs for 20 bucks. Just how many members are in the paid community is not known. According to web analytics tool Similiarweb, the login site is visited by more than 50K users per month.

Take a swig of the Creator Economy

Last June the Nelk Boys jumped on the Creator Economy train with the launch of another product in addition to their merch line: Happy Dad. A hard seltzer popular in the US and coming in different flavors, it sold out minutes after launch. On Twitter, videos circulated of fans camping out in front of liquor stores waiting to get their hands on just one can. While Instagram took down the Happy Dad account for a time for, quote, “blowing up too fast,” it is back online and has nearly 800K followers.

Crew founder Kyle Foregeard said that the Nelk ecosystem has the potential to become a multi-billion dollar business. Happy Dad, he says, is only the beginning of an entire product line, while Full Send CEO and celeb business tycoon John Shahidi sees the brand being on par with the likes of eCommerce behemoths Amazon, Apple et al in the future. Yes of course that is an absurd comparison given the sheer value of those companies, but the Nelk Boys are booming nevertheless.

Their popularity has led to celeb cameos being a regular feature in their videos. From Jackass OG Steve-O cooperating on the reg, and UFC CEO Dana White launching a joint merch collection to ex-president Donald Trump popping up in several videos (while they also troll his voters in others).

With that kind of pull, the Nelk Boys are now able to draw on the full scope of the creator economy, no longer appearing exclusively as a crew, but rather as individual personal brands; The YouTube channel of member Steve Deleonardis, for example, has surpassed the 3-million subscriber mark and there is also “SteveWillDoIt” (Deleonardis’ self-applied name on social) merch available in addition to the Nelk Boys merch.