Proof of Amazon’s increasing relevance as an SEO platform 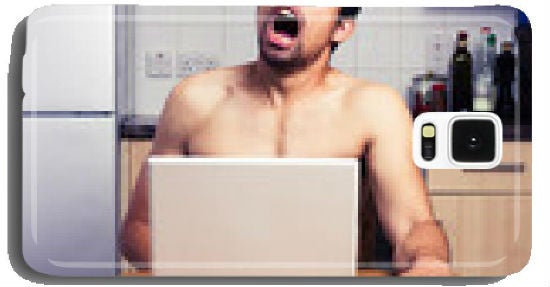 Eczema-ridden hands, old men in diapers or a good old-fashioned butt plug are just three of some 30K motifs that “my-handy-design” was hawking to users. Up until a few days ago, the uncouth motifs were available on Amazon, and also caused quite the stir in the international press. OMR found out who’s behind the coup and also explains just how the “my-handy-design” phenomenon is indicative of the current state of Online Marketing.

In the past couple of weeks, the world’s blog’erati have been inundating us with headlines such as “A horrendous Amazon Store account is selling phone covers of our nightmares,” “A bot on Amazon is making the best, worst smartphones cases” or “Amazon AI designed to create phone cases goes horribly wrong.”  And after Gizmodo ran its story, mainstream news outlets like the BBC, the Guardian and the Verge quickly followed suit. All about a heretofore unknown company called “my-handy-design.” 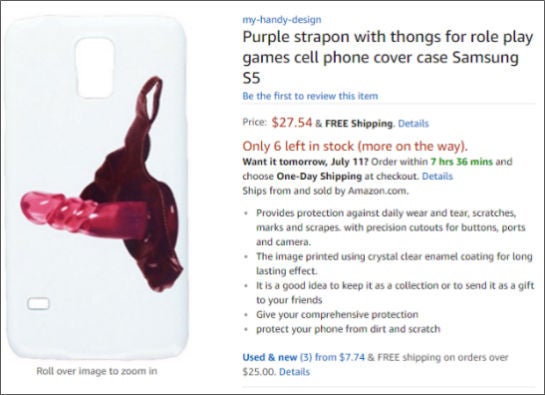 My Handy Design leads to Lederhosen

As the company prints cases using descriptive motif names like “Toenail fungus cell phone cover,” “Three year old biracial disabled boy in medical stroller, happy,” “Heroin, Spoon and Syringe,” “sick old man suffering from diarrhea, indigestive problem” and “adult diaper worn by an old man with a crutch” it’s hardly a shock that the aforementioned publishers ran the articles in the age of clickbait. Before they were taken down a few days ago, some 30,000 motifs were sold on Amazon. But apparently the business wasn’t a huge hit as the account profile only notched seven comments.

After researching the matter further, we found out that a German company named ToasterNet is behind “my-handy-design.” Managing director Tobias Hartmann confirmed as much when we contacted him. He told us over the phone that he “didn’t hear about any of the media uproar that the project caused” and that the “listings were created automatically.” “Through our partnership with stock-photo provider Fotolia, we have access to 40 million images, which includes motifs of nearly anything imaginable. So, whenever a customer makes an order, we purchase the selected motif for them and then print it on the case.” For a time, ToasterNet was active as a seller on the Amazon Marketplace in Germany. But business there, too, sputtered and the company account on the platform garnered a total of 13 ratings.

According to Hartmann, ToasterNet ceased their activities on Amazon due to issues with product diversity. “100 phone models and 40 million motifs cannot be displayed cleanly.” Hartmann said that shortly thereafter, Amazon USA showed interest in selling the phone cases themselves and took on some 30,000 articles. Ever since, ToasterNet has been active as a vendor in Amazon as “my-handy-design.” The company’s role in it all is more that of a supplier and not as a vendor that sells to end customers through Amazon.

The clip-on strap on

How exactly the current selection of motifs displayed so prominently on Amazon came about, Hartmann was unable to explain. “That there are people that actually purchased some of those motifs shocks me.” The project itself, however, is nothing more than a mini “side-project;” ToasterNet’s actual business is focused on developing software for medium sized companies. 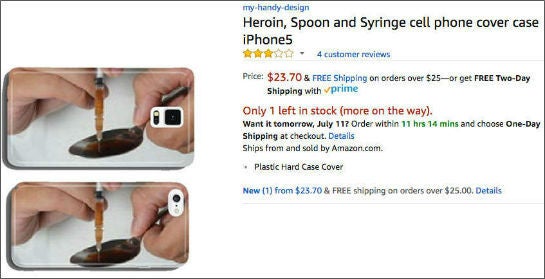 Strange phone cases are not only an example of Amazon’s buggy bot, but show just how Amazon’s powerful and wide-sweeping reach is shifting the online landscape. For years, online-marketing entrepreneurs looking to strike it rich turned to Google, where users were enticed to visit their site through optimized SEO and then redirected to shops for commission. But when users are looking for information about a product or are prepared to buy something, Amazon has closed the gap to Google considerably. In the USA, 55 percent of all product research takes place on Amazon. 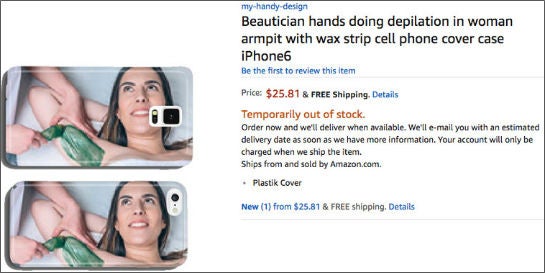 From the reach and awareness that Amazon generates, it is a highly attractive platform for third parties to sell their wares. People, such as Tobias Hartmann and his company, who don’t have to produce anything until after an order has been made, have little to lose. No production or storage costs coupled with Amazon’s reach equals an absolute no-brainer.

US online marketer Neil Lassen is said to have made 150,000 USD through made-to-order t-shirts on Amazon. Lassen has garments produced by designers in the Philippines and then puts them on offer through the Amazon Merch program. Amazon produces the shirts on a per-click basis and then ships them. The design “owner” receives a portion of sales. But he has no dealings with the actual production, storage or the articles themselves.

As is the case on Google, there are arbitrage models in play on Amazon, e.g. shrewd “merchants” purchasing items for cheap on Ebay and then selling them for profit on Amazon. The most widespread practice, however, would figure to be sourcing the articles for pennies in China (through places like Ali Baba), slapping on your own label and then reselling the products on Amazon. Recently, however, such business models have had a tougher go as many Chinese merchants have begun selling their goods on Amazon themselves. The current fidget-spinner fad, for example, is funneling loads of revenue to China.

That Amazon is Google’s largest competitor is becoming more and more evident. Sir Martin Sorrell, CEO of WPP, the world’s biggest ad company, publicly stated as much in this Business Insider article and soon after WPP acquired an Amazon agency to add to its network. Even in this regard, Amazon’s development and position is reminiscent to Google’s just over a decade ago. And once smaller agencies started being successful with services oriented to SEO and SEA, the bigger networks had to adapt and react by paying top dollar to acquire competences.