Not your mom’s kicks: Moxi’s rolling strong from niche product to lovebrand

Thanks to loud, eye-popping colors and a global pandemic, roller skates are experiencing a revival. Leading the pack: US skate-maker Moxi. Run by skating legend Michelle Steilen, we are breaking down how she has taken Moxi to the next level with succinct community building and sound influencer marketing, while revamping the old-school 90s fad with a hip, female image.

They glide with ease, fly down the street and across halfpipes, getting serious air and sticking handstands and landings with glee. Videos for the “Moxi Skate Girls” videos feature the self-styled Fearless Femmes rocking audacious colors and looks with rollerskates loud enough to match the hype: tapered heels, gaudy colors and wheels bright enough to light up the sky, which some do. After jam skating blew up last year (here the OMR profile of Berlin’s Oumi Janta), the Moxi Girls are the latest to profit from the rollerskate hype as the 11 million views of “Meet the Moxi Girls Skate Team” shows.

Rollerskates have a long history. Invented in Europe in the 1800s to simulate ice skating on stage, the popularity of roller skates reached its peak from 1930 to 1950 in a period known as the Golden Age of Rollerskating. After which their mainstream popularity ebbed and flowed, with high points in the roller discos of the 1970s and then again among the visor-wearing soccer moms of 1990s California. Even in times of lagging popularity, they played a crucial role in black social and female empowerment movements stateside.

Instrumental in propelling roller skates back to cool status is Michelle Steilen. The 38-year-old founded Moxi in 2010 in California, which has become one of the top global rollerskate brands in the world in just over a decade. From beginners to professionals, the sexy skates in loud pastel tones have struck a nerve. So how did the once modest business become the bold lifestyle brand it is today?

From the Derby to the shop

Steilen grew up in the 1980s in Philadelphia. Back then there were three kinds of skates: black, white and tan. In 2005, she completed her studies in psychology and moved to California, where she joins a women’s roller derby team. Here’s a quick primer on roller derby: You skate on a circular track, score points by getting to the front, while knocking the ever-loving shit out of your opponents to prevent them from doing so.

At the time, the only way for Steilen to practice her favorite hobby is among athletic femmes with a propensity for full-contact sports and she quickly makes it her goal to expand the skating space. Her idea: to make roller skates for women of all ages and fitness levels. She told the San Diego Union-Tribune in 2018 that she wanted to “create a brand that brought roller skating back to everyone.” She found her partner in Riedell, a Minnesota skate maker that has produced skates since 1945.

In 2008, Steilen opens up a shop in Long Beach, where she starts selling her first collab with Riedell: a black and white skate with various colorful laces and wheels as bold accents. Two years later comes the “Moxi Lolly,” the dazzling, retro skate series for which the brand is known around the world today. A pair of the pink, purple or bluegreen leather skates runs 279 dollars and the skates are sold exclusively through retailer Urban Outfitters for six months. 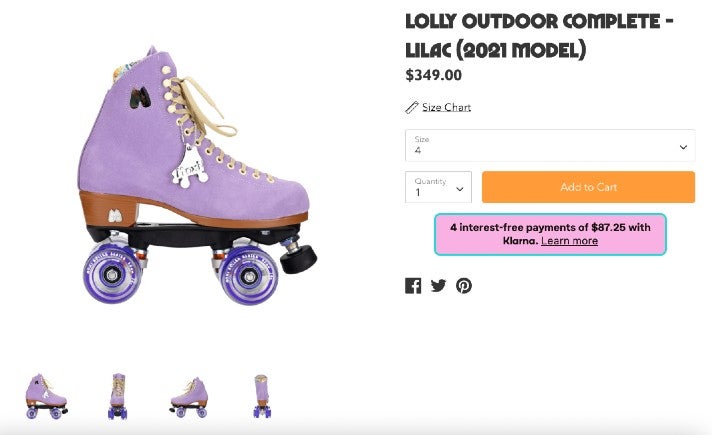 The Skate Girls take over

The first Moxi Skating Store in Long Beach quickly transforms into more than just a place of business. It morphs into the central social hub for the Moxi Skate Girls, a group of female rollerskate enthusiasts. They congregate and meet up at the shop before heading out on regular skate outs, where the girls go skating through the streets of LA.

In late 2013 Steilen sells the shop to her skate friend Shanya Meikle, a skater known in the scene as Pigeon, to focus on building the Moxi brand. “We wouldn’t know what each other was doing, but we’d all end up at the shop, like, ‘Oh, we’re all here. Alright let’s go hang, let’s go skate,’” she told Vice.

The number of Moxi skates sold grows every year thanks to retailers like Urban Outfitters and Dolls Kill, its own webshop and skating rinks that rent Moxis to guests. In 2017, Steilen and Moxi eclipsed 10,000 in global sales and its increasing popularity is primarily attributed to its social media content. Steilen uploads videos of skate outs to Youtube, then come tutorials for skating tricks and tips for beginners. The skaters themselves, including the Moxi Skate Girls and others, begin making and uploading nearly professionally produced trick videos to Youtube and Instagram. Steilen sponsors some of the more flamboyant skaters.

Two of the stand-out skaters are Amy West, aka @indyjammajones, and Courtney Shove, better known by her handle @fat_girl_has_moxi. West is a professional YouTuber skater, while Shove is on team Moxi. They both have over 80K followers on IG, where Steilen also has 160K followers to her @estrojen account. Her popularity is now such that she was Margot Robbie’s stunt double for her role as Harley Quinn in the movie Birds of Prey. On her Instagram channel, Moxi skaters exude confidence, while the feeds feature bright colors, a joie de vivre and in assertive garb.

The social media success that Steilen and others enjoy propels the Moxi name beyond the skater community. Moxi evolves into a lifestyle brand synonymous with cool, with female empowerment and diversity. “It’s the only brand I know within the entire skating industry … that really touches on the fashion, lifestyle and much broader market,” Zach Kulak, brand manager at Riedell, told San Diego Union-Tribune. The Moxi Youtube channel has some 70K subscribers on Youtube, with Steilen’s personal channel adding an additional 11,000. On Tiktok, the hashtag #moxirollerskates has generated over 190 million impressions and has a total followership on Instagram of 350,000.

“Skates are the shoes of the future, not of the past”

A portion of the community purchases from Steilen’s webshop directly. The shop not only offers Moxi Lollys, which now cost 349 dollars, but also other models of skates, like the less-expensive Beach Bunnies, plus branded accessories such as socks, skate bags and Caps. The Corona pandemic gave a massive boost to Moxi and Riedell’s business, as their skates are made for outdoor use. According to analytics tools Similarweb, the shop averages 300,000 monthly visitors in April 2021, 60 percent of which are organic via Google and 35% is direct, meaning that users enter the Moxi URL into the browser.

Demand and popularity is now so high enough that people have to wait longer than normal to receive their skates, which has led to the formation of a Reddit group titled DudeWheresMyMoxies, as the Wallstreet Journal reported. Due to the bottleneck—Riedell is reported to be late on up to 50,000 units—Steilen has pushed back the launch of several new products. The revenue figures for 2020 are not public at this time. However, Steilen is confident in the long-term success of the brand, despite the corona-induced spike. “Skates are the shoes of the future, not of the past,” she said in a recently released video.