Mary Meeker is a moneymaker: Here are her 6 top online shops worth copying

The Meek shall inherit the Internet 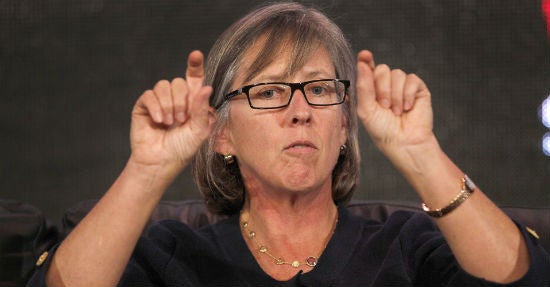 It’s appointment viewing for the industry. Mary Meeker’s “Internet Trends” turns marketing heads from across the industry. On over 350 slides, Meeker, a partner at Silicon Valley VC firm Kleiner, Perkins, Caufield & Byers, presented her outlook and ones to watch for the next year back in July. To make sure that nothing important gets lost in the shuffle we took a closer look and have highlighted 6 eCommerce startups worth keeping your eye on.

Our list of the top-6 begins with an absolute superlative with plenty of new tricks up its sleeve. Chewy, an online shop for nutritional products and accessories for pets, scratched and clawed its way to a total market share exeeding 50% within 5 years with 10% of that stemming from subscriptions, according to a study by 1010data. To put that into context, Amazon’s total market share in the sector according to the same study was 35% for Q1 2016. After posting roughly USD 900M in revenue, Chewy was sold to offline competitor PetSmart for USD 3.35B in April 2017–the largest exit ever in eCommerce.

What makes the shop so successful? Meeker pinpointed an incredibly loyal and appreciative target group as instrumental factors to company success. “Only a few pet owners return goods, which practically eliminates product returns, which are commonplace for fashion sites,” says Meeker. Even more important to Chewy’s success, however, is that its excellent customer service spurred on the organic development of a community, with which Chewy regularly interacts. This primarily entails proud pet owners on Facebook sending pictures of their cats and dogs in, on and or around boxes of Chewy products. The comments section, too, exudes effusive praise, while Chewy.com boosts community engagement via specials and events like #fanfriday, where Chewy picks out and posts the best of the bunch to its Facebook page showcasing the winners to its nearly 500K fans.

Who says you need cats and dogs to activate a community?

The reviews on Google confirm the extraordinary community management, as well as its ordering and delivery process. Despite 317,000 reviews, Chewy.com has a 5-star rating and 99% of all reactions are positive. To maintain such lofty status, the company has invested heavily in personnel, with 450 of 3700 dedicated solely to customer service who are available by phone all year round. 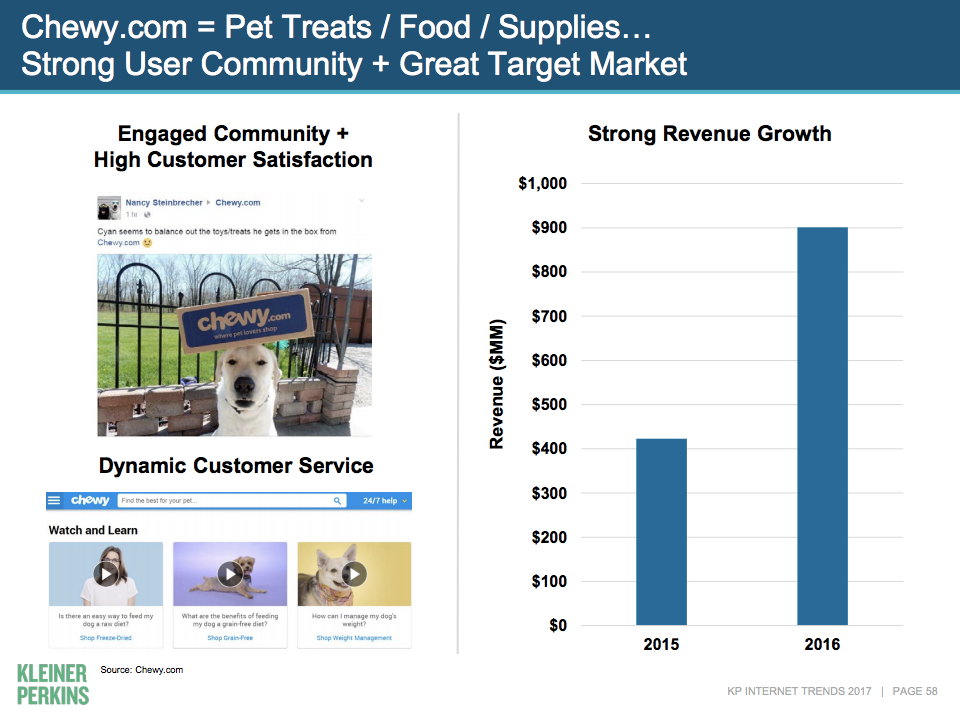 Even though Chewy.com certainly doesn’t need any advice from outsiders with such growth figures, we see room for improvement. The Internet, as we all know, was made for one purpose: consuming and sharing cat videos. What better business model could there be than an online shop for pets? Well, Chewy is still catnapping on video, neither investing time or money in the format. It would figure to be incredibly easy to leverage such an active and engaged community into filming and sharing videos of pets or unboxing orders from Chewy.com. There are countless examples on YouTube and Facebook of such content being reach drivers. Chewy’s has yet to maximize its potential on either platform, with Facebook videos notching a mere 4-digit in views, despite its 500K fans, while on YouTube the most watched video has only been seen a paltry 28K times. It’s enough to make you wanna lift your leg.

Glossier and the digital makeover

Another area of interest that is a proven organic-reach driver on social is beauty. Tips, tricks and tutorials aimed at boosting your appearance and self-confidence appeal to the masses and have the success to back it up. That’s by no means surprising. That the “niche” is so massive to propel blogs into eCommerce cash cows, however, is. Meeker thought the same as she summed up Glossier with a single sentence: “They are fantastic at content marketing.”

Emily Weiss founded Glossier in 2014, after she successfully established her own beauty blog “Into the Gloss” in 2010, while still a staff member at Vogue magazine. “Into the Gloss” has since taken its content marketing machine to new heights, reaching 1.5 million readers a month. Thanks to products like eyebrow gel and face cream, Glossier made the jump from blog to one of the most ballyhooed beauty startups ever. After the most recent funding round in November 2016 generated USD 24M in capital, its total capital topped USD 34M, while company growth exploded threefold over the ensuing 12 months according to founder Emily Weiss. The company currently offers 22 products with more in the pipeline, employs over 100 employees and recently announced plans to expand to Canada, the UK and France. 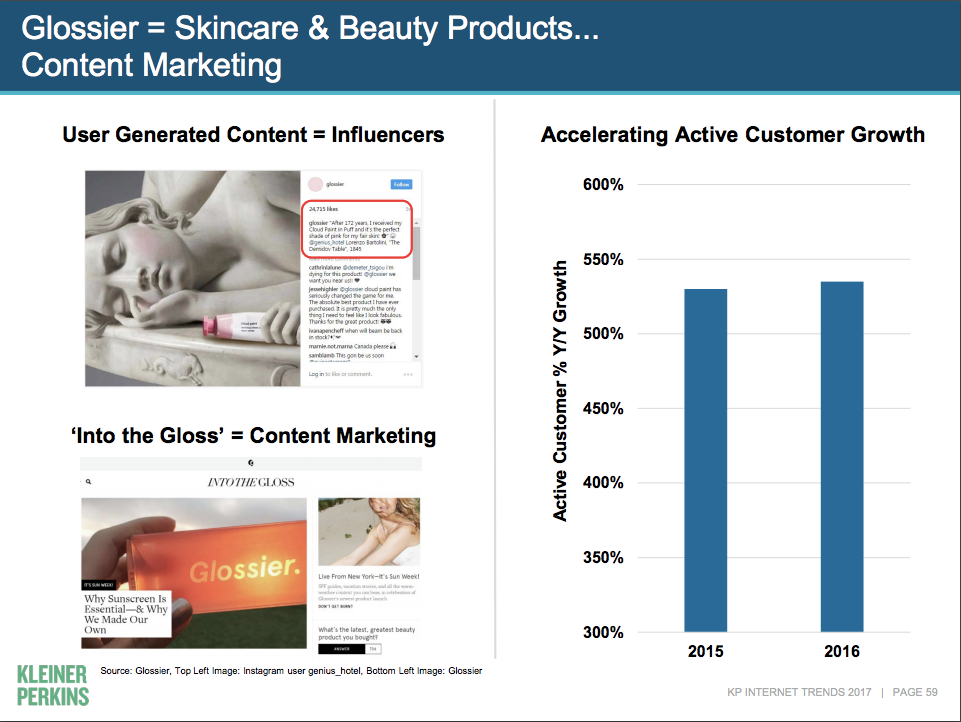 Weiss may have learned how to create fantastic content marketing during her time at Vogue, through her blogging activities or from her 2007 appearance on MTV’s reality show “The Hills.” Whatever the case may be, she has got it down. In addition to a massive readership with “Into the Gloss,” Glossier also has 660,000 subscribers on Instagram and 133,000 Facebook fans. What’s more is that Glossier also boasts 500 “reps,” brand ambassadors who act as influencers, promoting Glossier content on their own blogs and social media profiles and netting commission on purchases.

Untuckit: Men’s shirts tailor made for a USD 200M valuation

That Meeker really does believe in number 3 on our list of 6 was confirmed a few days after publishing—she helped spearhead Kleiner Perkins’ investment in US-fashion shop Untuckit for USD 30M, at a rumored valuation of USD 200M. Untuckit satisfies a market need that she herself has probably never had. Founders Aaron Sanadres and Chris Riccobono scoured fashion shelves high and wide to locate shirts that kept looking great even when not tucked in. Their obsession gave birth to the concept of Untuckit and in 2011, the company launched. While the startup now offers a wide range of men’s and women’s garments, perfect-length shirts continue to be the focal part of the marketing strategy.

The message is simple enough, “Shirts designed to be worn untucked” and is spread online and offline, for example in its eight stores. Radio spots on sports stations stateside and in-flight magazine ads have proven to be right on the button. 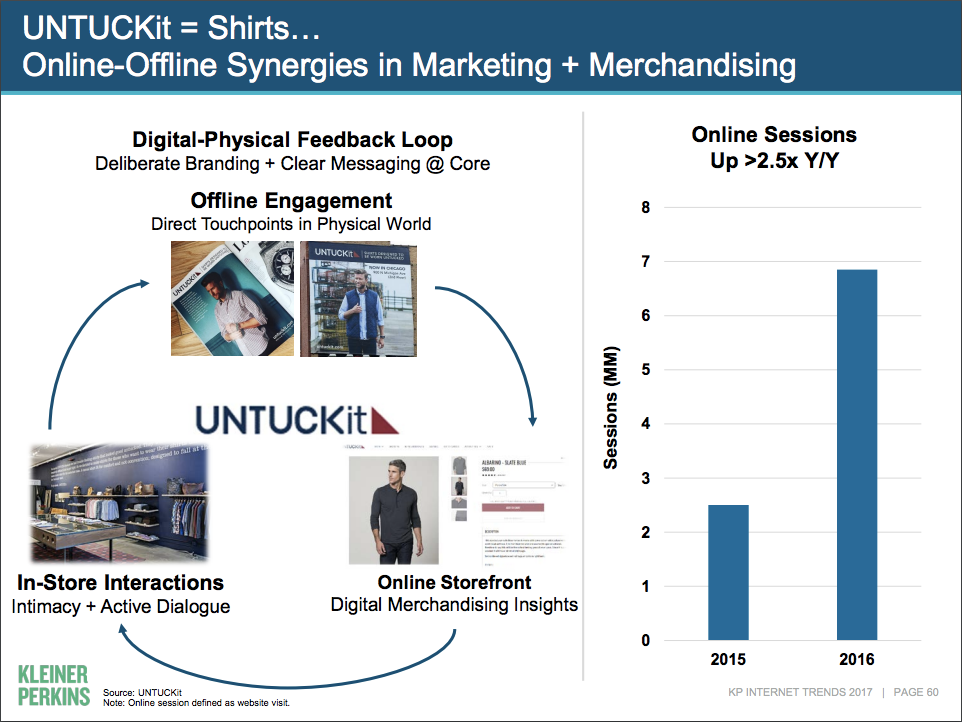 Staying in the fashion sector, number four on the list shifts from torso to toes. In 2015 Joey Zwillinger and former New Zealand soccer pro Tim Brown founded Allbirds, which produces and sells what they claim to be the “world’s most comfortable shoes”— made from wool. Back in 2014, Allbirds took off through a campaign on Kickstarter, where they reached their initial funding goal of USD 100K within just a few days; two years later and two more financing round (Seed and Series A) Allbirds take home over USD 10M. Meeker is a fan of the innovative product and the website’s easy navigation; for both men and women there are only two models available at any given time. Whether or not Meeker wears any herself is unclear. 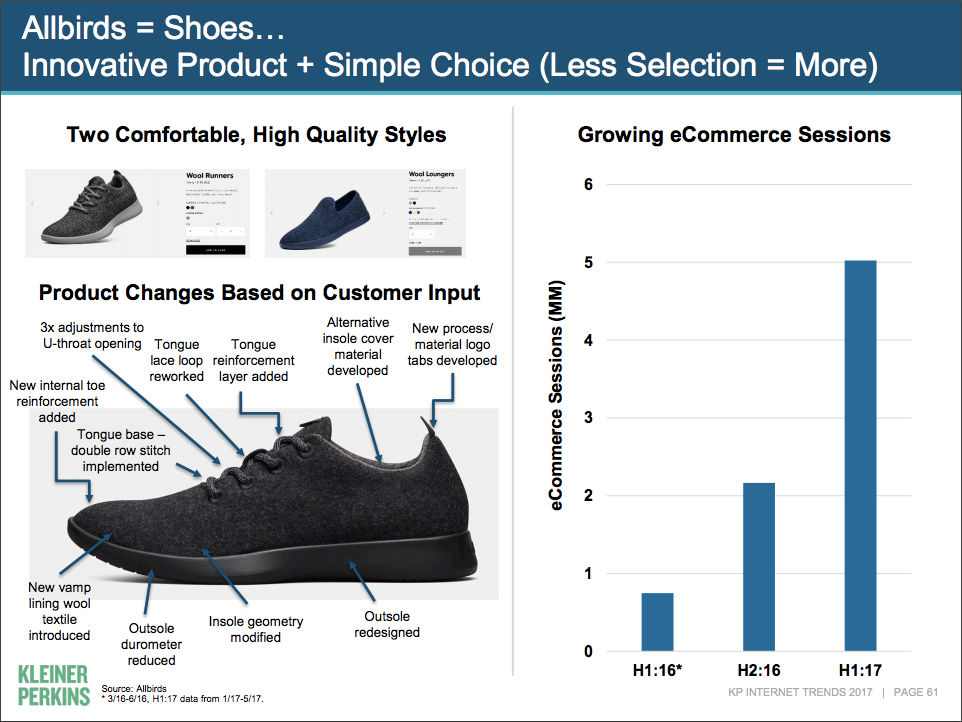 Scott Galloway’s market-research group L2 recently praised the sneaker start-up’s entire brand presence. In addition to the product itself, the packaging, too, has been well received—leading to numerous unpacking videos by happy customers.

Towards the end, Meeker takes one last gander back at Europe—but her sights aren’t set on London or Berlin, but on Istanbul. According to a company statement, Trendyol is the country’s largest fashion retailer and was founded in 2009 by Demet Mutlu while she was still a student at Harvard. In 2016, the company says it sold 20 million articles, which translates to revenue of approx. USD 350M. Yet, what Meeker sees as especially unique about Trendyol: they focus their efforts on their own brands, which are responsible for 38% of total revenue. Furthermore, the roughly 1000 strong supplier network delivers to a 50km radius in Istanbul, which reduces delivery times and prices. In three rounds of financing, the company was able to collect USD 37M. In its Series C financing round in 2011, Trendyol amassed an impressive USD 25M, thanks in part to—you guessed it—Kleiner Perkins. 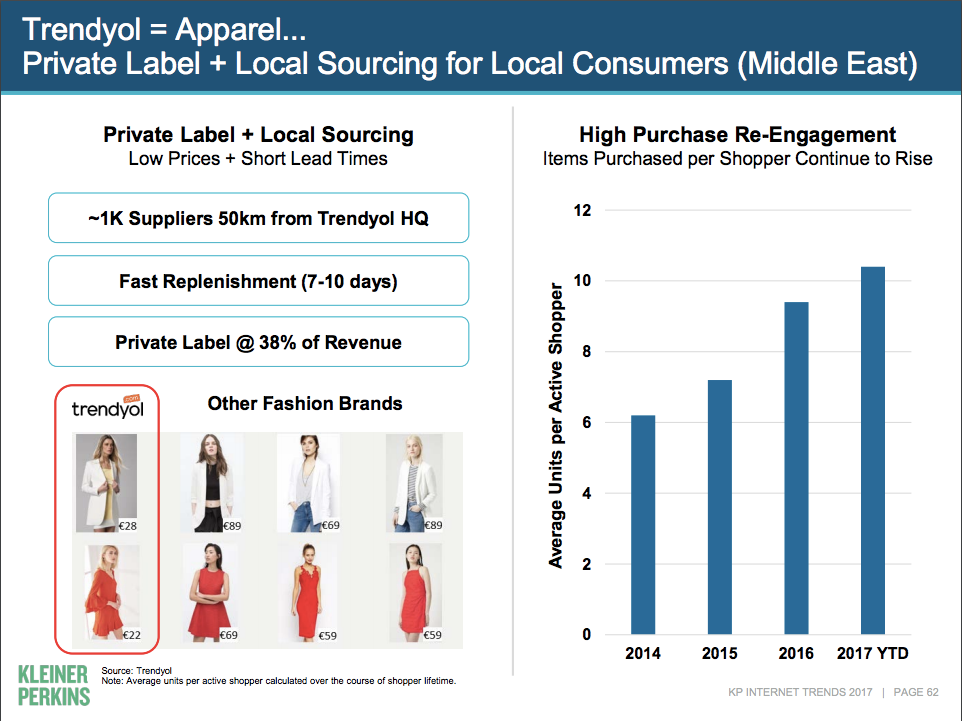 At the ripe old age of 27, Sarah LaFleur was fed up with her job in finance and decided to found MM.LaFleur in 2011. The online shop set out to provide solutions to problems that women frequently had in their profession: finding attire that was kosher for the workplace without sacrificing a sense of fashion. Ever since, MM.LaFleur has functioned as an online stylist and ships boxes of clothing tailored to customers’ individual measurements and preferences. Furthermore, MM.LaFleur began operating its own offline store a few months ago in Washington D.C. Meeker likes the dynamic between clients and fashion expert, which has been instrumental to establishing a frequently returning customer base. 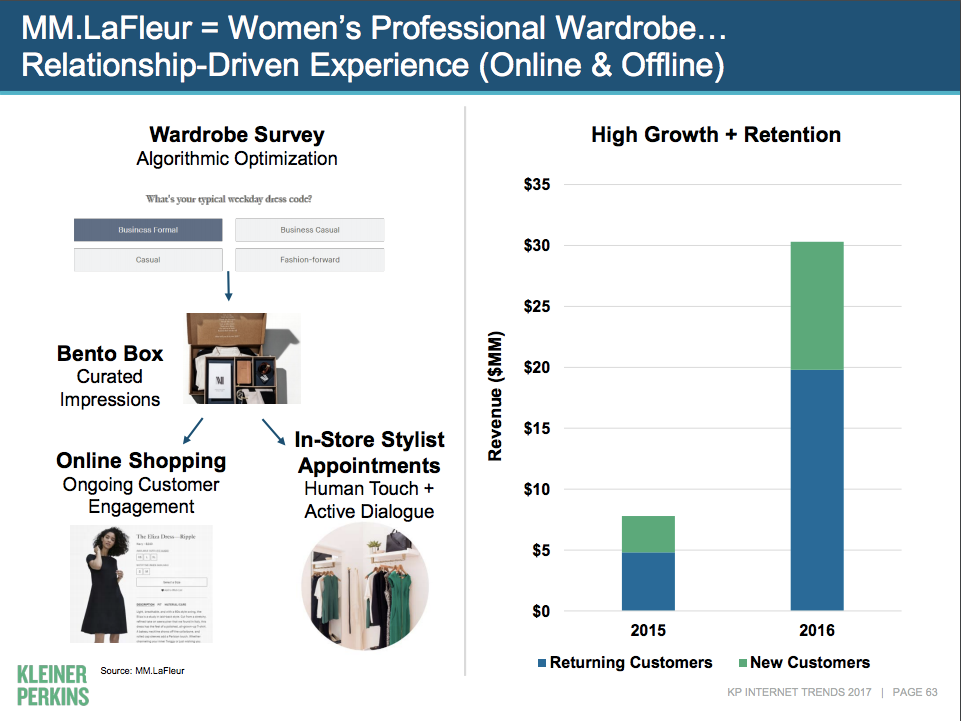