Although there are several examples of brands who’ve taken their Amazon project and transformed it into a fully-fledged business, it is no easy undertaking. Corinna and Patrick Links are turning their side hustle on Amazon into a full-time gig with toy company Kindsgut. With spoke to the founders about their strategy to scale up their idea on the world’s biggest eCommerce platform and how they have used their success on Amazon to make a name for themselves elsewhere.

“Kindsgut was conceived out of necessity. When our daughter was born in 2016, we weren’t really satisfied with the toys and accessories we found. Everything was either too expensive or just not nice,” Patrick Links tells OMR. “So we started kicking around ideas about how we could do it better, keeping the needs of both parents and kids in mind.” That initial brainstorming led to Links founding Kindsgut together with Bijan Niroomand in 2017. At the time of founding, Links’ wife Corinna is still COO at Vertical Media GmbH, the company behind Gründerszene, an influential German trade publication that covers startups and entrepreneurs; she comes on board in 2018, where she primary focus is on marketing. Three years after seeing the light of day and completely bootstrapped, Kindsgut generates seven-figure revenue with an assortment of wooden toys, animals, clothing and accessories.

One of the top-sellers for Kindsguts: the Whale potty

“Our mission is to provide affordable toys and articles that are safe and charming,” says Corinna Links. “As we were total newbies to the sector, we focussed primarily on those items that we personally liked. In the end, that approach was very beneficial.” That same lack of experience contributed to their initial risk-averse strategy. “We decided to start selling on Amazon to gauge how well-received our niche would be—if at all,” says Patrick Links. “We got our answer pretty quickly with the first test-run of 30 products quickly selling out.”

The best-seller of the bunch? The whale potty (pictured above), which today has over 2300 reviews on Amazon. According to Kindsgut, they have sold over 100,000 whale potties. What was truly remarkable was the number of copycats who soon popped up and piggybacked of the whale’s success. Corinna and Patrick Links told us that they have since trademarked that whale design for a potty in Germany.

When we asked him for his take on why Kindsgut has been successful on Amazon, he pointed to the high-quality product images that “emphasized how the products looked in action.” Since they had also focussed on the full scope of options at their disposal on Amazon (fulfillment, ads, etc.), the initial success snowballed into subsequent revenues and a succession of new promising opportunities. What’s truly telling about the company’s success is the sheer volume of so-called A+-Content on the Kindsgut product page. The company is represented in every single European market with an Amazon store, which makes it easier to acquire a best-seller label on Amazon, especially when bigger advertising budgets are in play. 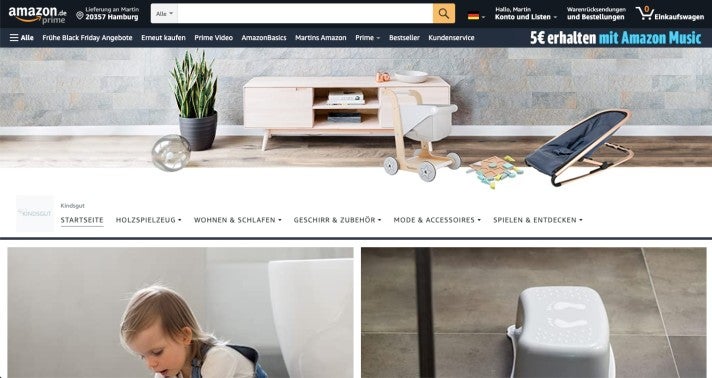 The Kindsgut store on Amazon

That’s one reason Kindsgut invests money into prominently positioning its products on Amazon. “What’s nice about advertising on Amazon is the measurability. We can see the direct correlation between adspend and revenue, which helps us create benchmarks for other channels,” says Corinna Links. “We have our marketing budgets, but if a campaign reaches a certain ACoS [Editor’s note: Advertising Cost of Sales is a metric used to measure the performance of an Amazon Sponsored Products campaign] threshold, then we can scale that up and divert more funds, because it snowballs from there.” Next up for Kindsgut: the much anticipated Amazon launch of Amazon Attribution, with which merchants on Amazon can measure the impact external channels have on Amazon sales, which Links says will influence Kindsgut’s strategy moving forward.

While Amazon figures to remain the most important sales channel moving forward, the company is making a concerted effort to diversify its sales channels. “We started out with nearly 100% of sales generated on Amazon, our sales volume now is 60% Amazon, 25% retail and 15% from our own online shop,” says Patrick Links. The retail segments include partnerships with standard online retailers, as well as additional marketplaces Kindsgut is currently testing. “Amazon is a very important channel for the company, but we’re always looking for new opportunities. Idealo and Check24 (editor’s note: two major marketplaces in Germany) are increasing in relevance as well as specialized children’s marketplaces such as Limango, tausendkind and windeln.de,” says Corinna Links. She also told us that Kindsgut is in the partner program in the brand new marketplace by the Otto group and a strategic partner in the new Zalando toys program.

To ensure that their own shop continues to grow, which first launched in 2019, Kindsgut stresses the importance of its own warehouse, which currently measures 1000 square meters (approx. 10,000 square feet). This limited space means selling through marketplace partner warehouses is all the more important, especially when considering that goods are imported from around the world. “We have personal relationships with our manufacturers in Asia and Europe. In China, for example, we have our products manufactured where 75 percent of all wooden toys worldwide are produced. They are simply the best,” says Corinna Links.

For its brand-building strategy beyond Amazon, Kindsgut employs a tried and true strategy. Google Ads are already live, affiliate marketing measures are currently under testing and the team produces content marketing on the company blog “Kindsblog”. The “mom community” is extremely engaged and the blog focusses solely on topics that would interest moms. An example is “Homestorys,” which deals with influencers who have collaborated with Kindsgut.

“We are very selective about which influencers we partner with. Many mothers post pictures of our products, but do so without being compensated,” says Corinna Links. “User-generated content is an important building block: Kiddies and interiors are a beloved motif on Instagram and that is content that we can use.” Currently, Kindsgut has some 24,000 followers on Instagram and #kindsgut has been posted in some 1600 posts. It’s a nice to have, but the Links prefer measurable marketing channels instead of paying influencers blindly.

Kindsgut is now setting its sights on generating growth in markets beyond the Fatherland. “Our main focus is now internationalization. We’re working on recreating the same success we had in Germany in other markets in Europe,” says Patrick Links. At present, that is primarily driven via the respective Amazon pages Kindsgut runs throughout Europe. In France, Kindsgut has begun supplying retailers with products and kindsgut.de is also available in French. Charged with pulling off the company’s expansion efforts is a relatively small team of 15, six of whom are full-time members of staff. For the foreseeable future, the company prefers to employ automatization strategies for its marketing and logistics endeavors instead of bloating the team unnecessarily. Despite the lean company structure, revenue for 2020 is projected to increase by 50% compared to 2019.