How much and to what extent is it possible for a massive, market-dominating company to grow? This question is something industry observers have been asking themselves for years with respect to Google. In its most recent quarterly report, Google declined to disclose its revenue per click for the first time ever. Why the omission? Google expert and online marketing consultant Philipp Klöckner puts forward a thesis in a guest article and analyzes the possible ramifications for the online marketing industry.

It’s a small detail whose impact could be massive that has received little attention: In the press release in Google’s quarterly report for Q4 and the earnings release for 2019 from February 3, Google’s parent company Alphabet did not disclose the change in average Cost-per-Click (CPC) compared to the previous year. This figure is central to accurately gauging Google’s core business,  revenue derived from digital advertising. In every previous quarterly report, Google disclosed the change in CPC—including Q3 in 2019 and Q4 2018. Google has yet to respond to OMR’s request for comment on the reasoning behind the move.

The omission has yet to generate much media traction. Only ZDnet covered “the mysterious disappearance of the click metric.” The article does a good job of showing the very apparent inverse correlation between the growth of the amount of clicks and their value (CPC). Author Tom Foremski presumes that by expanding its advertising space (a massive increase in the amount of paid posts on the search results page), Google is attempting in vain to compensate for the plummeting CPC.

In my eyes this interpretation is wrong.

I have written about the development of Google’s average CPC back in 2013 and again in 2015. In this posts, I posited that the inverse to what Mr. Foremski said is true: Google’s aggressive expansion of its advertisable space has lead to a click inflation which by necessity leads to the plummeting CPC.

Google can generate as many clicks as it likes, but if the volume of eCommerce sales does not keep pace at the same rate, advertisers will no longer be willing to spend as much for the individual clicks—and rightly so. Last year, for example, Google saw an increase in clicks of nearly 66%; global eCommerce revenues, however, only saw an estimated 11% to 12% increase.

And let’s not overlook the fact that more and more transactions are beginning right on Amazon, while the ad spend on Facebook and Instagram is growing at a dynamic rate of nearly 30. Google has not disclosed the total number of search queries it handles since 2012—back then there were clear signs of stagnant growth. InternetLiveStats.com estimates the total number of search queries to be currently growing at a rate of approximately 10%. Personally, I think the commercial, and therefore more significant queries for ad revenue, have stagnated completely or are even in a slight decline.

The decline of Google’s commercial output

No matter how you slice it, the ever-increasing click volume has to be seen against the backdrop of the ever-decreasing economic value that Google is able to deliver. Market logic dictates that the price must sink since the pie everyone is vying for is not only growing, but influx of pieces (clicks) have to be shared even further.

Since my article appeared in 2013, Google has primarily cited the following reasons in its earnings reports for the “fluctuations of paid clicks and CPC”:

That sounds like standard “market fluctuations.” While all of these factors do play a role, their impact on the overall development is much less significant that the abundantly clear negative correlation between the volume of paid clicks and sinking CPCs. Google is simply mudding up the waters to avoid giving off the impression that company growth can only be achieved by inflating click figures. 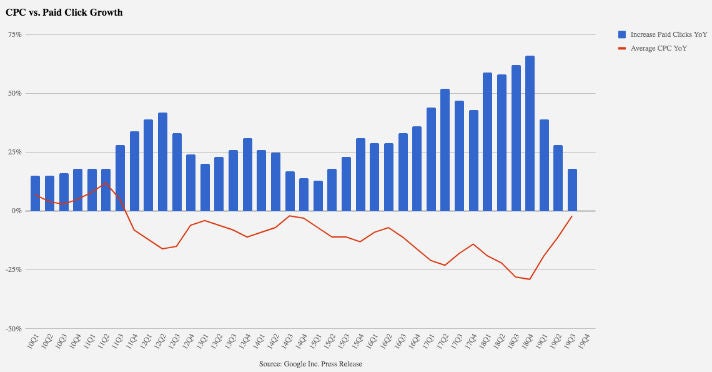 Why did Google cease reporting this core metric? If you take a look at Google’s performance over the past four quarters, it is apparent that Google has been unable to significantly increase clicks, and the relative growth rate has sunk in each quarter by at least 10%. After Google crashed from its high point of 66% click inflation down to 18% two quarters ago; the typically strong 4th quarter could have seen click rate growth under 10% for the first time ever—and indicate an end to its success story.

As total growth has increased by 17% that has to mean that the CPC has increased by 4% to 5% for the first time in a long time. This seems realistic against the backdrop of market growth, improved advertiser efficiency, consumer confidence and curbing the expansion of clicks above all else.

This means two things going forward. On the one hand, it’s becoming increasingly apparent that Alphabet is facing a period of maturation as a one-trick pony due to its main source of revenue (Google Ads) and no additional revenue and growth channels.  The model remains highly profitable but it seems clear that Google has reached the limits of its growth which no amount of aggressive increase of clicks can change.

Youtube will not be able to compensate the stagnation

On mobile and desktop, nearly 100% of the viewport (the area visible immediately after making a search on Google) consists of ads and advertisers, who are already paying a premium on transactional queries and are not willing to pay more. The potential for ad bidding to increase the price is limited. In the years to come, we will see only moderate growth to the order of 10% to 13%.

In this context, official YouTube figures were published for the first time. Youtube revenue is much more dynamic, growing at a rate of 36% compared to the 18% growth in search revenue. That’s a silver lining for investors (Google paid 10% of its current revenue to acquire YouTube after all), but it still will not be able to compensate for the stagnation of search revenue.

The most painful part of this development is that online marketers and SEOs especially have to be ready for continued and intensified desperate “innovations” made by Google. I predict a continued increase in CPCs for brand clicks. The minimum CPC that brands and webmasters will have to pay to reach users searching for their brands will be continued to be arbitrarily determined by Google  and additional “updates” could appear at any time.

Google will double down on its current verticalization strategy and increase revenues from its hotel finder by displaying its own search results for vacation rentals. I would not be surprised to see the first monetization options for Google Jobs implemented by no later than the end of the year, which employers, business platforms and job boards will be happy (about being forced) to pay given the current state of the job market.

An increase in secondary battlefields

This is all taking place against the backdrop of a host of competition and tort proceedings against Google, which are focussing on its conduct in the past decade. Google cannot afford to give in and must defend its results since the cost and fines stemming from legal proceedings have always been lower than the returns from the continued intrusion in additional search sub markets. 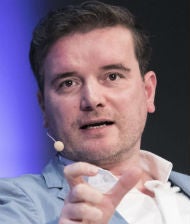 Philipp Klöckner began his career at German price comparison portal Idealo.de, where he was active as a product manager and inhouse SEO specialist for 6 years. Klöckner has worked as a consultant since 2011 for startups, high-growth companies and investors. At Rocket Internet, the company builder by the Samwer brothers, he primarily oversaw the online marketing and SEO operations of numerous successful international startups. Over the course of his career, the 38-year-old has advised over 100 companies. Today, his clients are primarily venture capitalists and private-equity firms.