Saving the oceans one bag at a time? Unpacking the strategy that helped backpack startup GotBag generate 8-figures

Mystery boxes, sailboat giveaways, PR co-ops and community: there's more to the Got Bag than just cleaning up the world's oceans

Founded in 2016, GotBag produces sustainable backpacks made from plastics fished out of the sea and ocean. Three years on, the German start-up has generated 8-figures in revenue. GotBag founder Benjamin Mandos spoke with OMR about growth, production and community, shedding light on the tactics that have led to 130,000 followers on Instagram, demystifying dropping mystery boxes and why giving away a EUR 15k sailboat has put even more wind in its sales.

“We both have an affinity for the sea,” Benjamin Mandos said in response to our question on the genesis of GotBag, the startup that he and his former business partner Roman Ruster launched in 2016. “As a child, I spent a lot of time sailing with my father in Flensburg [a port town in northern Germany author’s note],” Mandos said. Ruster also grew up around the water in his home of Tel Aviv, where he learned how to surf at an early age.

Mandos travelled frequently as a cameraman and continued to do so after founding a video agency, which took him to shoots in Thailand, Brazil and other far-away places. In addition to the sun and sea, there was another constant companion on his travels: plastic. “The seas are flooded with plastic, but effective solutions to combat the problem are in short supply,” he says. His jet-setting life and recognition of a need for action crystallize into a business idea: collecting plastic from the seas, recycling it and using it to make backpacks. Why backpacks? Mandos said they’re ideal, because they don’t need to be cleaned regularly, don’t shed microplastics and are popular companions among travellers. The world’s oceans and seas provide an unlimited supply of raw material—it just needs to be collected and utilized.

Cast into the sea—and then in cement?

On the surface, it sounds great—and complicated. Step one for Mandos and Ruster was to organize cleanups, meaning, in this case, they contacted several fishermen through an NGO, who would fish the plastic out of the sea for them and deposit it on the beach. The maiden cleanups took place along the Spanish and French coasts; later they turned their efforts to, in Mando’s words, “one of the epicenters of plastic pollution:” Indonesia.

The cleanups turn into GotBag’s first production step, one that continues to this day: some 2300 Indonesian fishermen collect plastic from the ocean for GotBag and bring it to recycling centers. Whatever is recyclable is washed, shredded and processed into polyester yarn, which is then sent to local seamstresses who manufacture the finished backpacks. Everything that is unable to be recycled, is sent to a concrete factory, where it is used to produce energy.

In November 2018, there are only a fraction of Indonesian fishermen sailing for GotBag as there are today. Undeterred, the founders launch a GotBag fundraising campaign on Kickstarter. With the EUR 28,000 in funds generated, they build a stripped-down webshop and produce the first batch of backpacks. Ruster leaves the company in January 2019, leaving Mandos solely in charge. In the first fiscal year, GotBag offers a single model: a mid-sized rolltop backpack with a clip fastener. 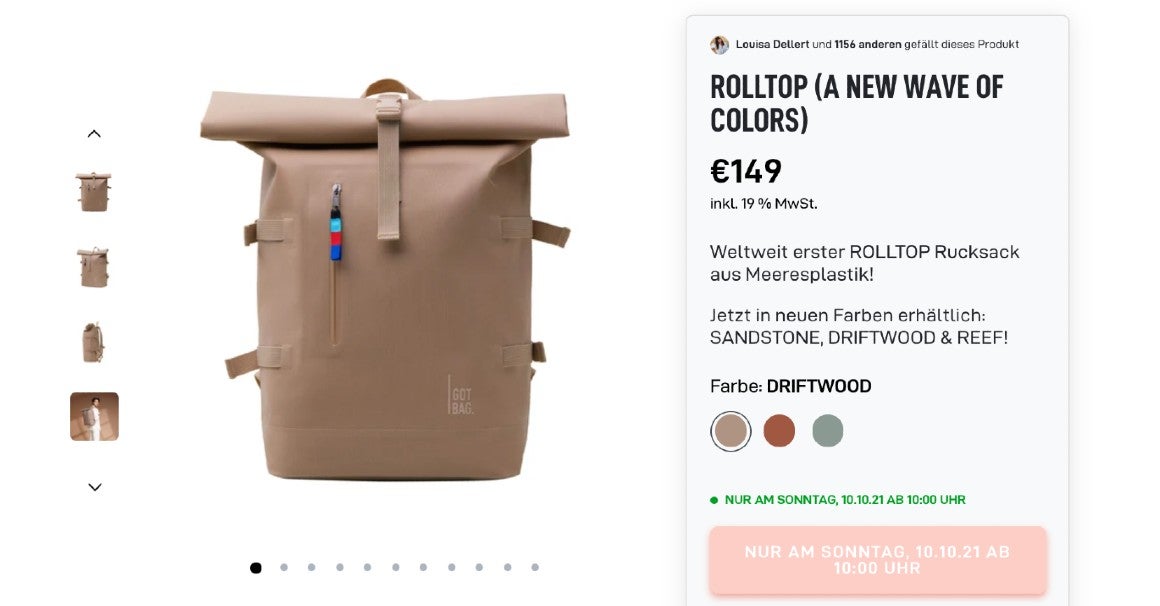 The GotBag best-seller going for EUR 149.

Timing, as they say, is everything and in 2019, GotBag got an awareness boost from local media. “Ocean plastics pollution was just entering the mainstream consciousness,” recalls Mandos. “And the local newspaper, the “Mainzer Allgemeine Zeitung,” and smaller radio stations reported on us.” While that’s going on, Mandos put his expertise in photography and videography to use, setting up the company Instagram account. Here, and on Facebook, they–Mandos and new co-CEO Martin Keiffenheim—begin running paid ads, for which they say they spent EUR 150,000 in the first year. In addition, they begin dispatching a company newsletter to their community two to three times per week.

Already in year 1, GotBag generated revenue in the lower 7-figure range. A significant driver of early success was co-ops with influencers; the first successful partnership was nearly too good. When Madeleine Alizadeh, aka Daria Daria started plugging GotBag products in her stories, the demand “nearly crippled our shop,” says Mandos. Today, GotBag has just north of 130,000 followers on Instagram and co-ops are a fundamental pillar of its marketing strategy. “They are the most-effective way for us to reach new communities and audiences that would otherwise remain sealed off to us,” says Mandos. Currently, GotBag has a special collection on offer, which was co-created with celebrity photographer Paul Ripke, who is promoting it on his social media channels. Another co-op available on GotBag’s website at the moment is a special co-branded Sea Shepherd backpack.

Drops create excitement in the community

Another growth lever that GotBag likes to use is giveaways. Last March, it was mystery boxes. As the name implies, the content of the boxes was an absolute mystery, save the promise of a backpack. It wasn’t until the actual unboxing—and ponying up the EUR 199 for a box—that the contents were revealed. Inside were in fact an assortment of goodies from other sustainable startups, like The Nu Company or Soulbottle. To further create excitement among the community, GotBag deploys drops regularly. These drops (here the OMR drop primer) usually entail special giveaways or limited discount codes for new collections or goody boxes, which are promoted across their social channels a couple of weeks before the launch.

“Drops are a perfect fit for us,” says Mandos. “We sell out boxes within a day just from the FOMO drops inherently create.” When it comes to giveaways, the concept is simple: raffle off something crazy that creates a splash. Like a sailboat worth 15K. “We wanted to increase our followers and we thought causing a stir would be an effective way to do that,” says Mandos. Mandos and GotBag decided to use the “tag three friends” ploy commonplace on pretty much every platform. Mandos says that the company was able to acquire an additional 20,000 followers on Instagram. But it didn’t end there; GotBag intends to follow the two winners on their journey, filming it and running in on social.

8-figures in revenue in year 3

Since Mandos and the team sold the first backpack in late 2018, revenue has grown consistently. In 2021, Mandos says it’s projected to eclipse 8 figures. While GotBag’s collection has also grown in the meantime to include other travel bags, hoodies and, since last month, a kids collection, the original backpack is still the best-seller.

About 70 percent of all sales are generated through the online shop, the other 30 percent coming from retail outlets. Gotbag currently sells its articles in approximately 350 retailers. And if you are counting at home, each backpack contains 3.5 kilograms of plastic waste, which otherwise would be drifting at sea off the coast of Indonesia.