Together with our parters Yext, we're bringing an exclusive plane full of media and marketing aces from NYC straight to the OMR Festival 2019

A trio of founders: Gimlet, Cheddar and Fatherly at OMR19

While Silicon Valley is the tech hub, New York remains the primary stage and source of inspiration when attempting to discern the future of digital media. With recent layoffs at both Vice and Buzzfeed, the future in the industry is anything but rosy. But there are a trio of new players on the scene breathing new life and optimism into the sector, like Gimlet Media, Cheddar and Fatherly. We’re flying over the founders to the OMR Festival this May 7 & 8, where they will be on stage highlighting their roles in the shifting publishing landscape. Today, we’re going to tell you what makes these companies special and why you need to attend OMR19.

The news sent shockwaves through the industry in early February 2019: Spotify shelled out USD 230 million to acquire podcast network Gimlet Media (and also snatched up podcast platform Anchor in a separate deal on the same day). It was the biggest deal the industry has ever seen. Since 2014, Gimlet founders Alex Blumberg and Matthew Lieber have been finetuning their craft. “Our goal is to be the HBO of audio,” co-founder Lieber said back in 2017. Gimlet produces its own shows, selling ad time in them. On top, there is the “Gimlet Creative” department, which creates podcasts by order for companies like Adobe, Reebok, Mastercard or Microsoft. Before the acquisition by Spotify, Gimlet collected over USD 28 million in investments.

Rethinking the monetization of Podcasts

“Spotify is in the process of becoming the largest audio platform in the world and we are thrilled to be able to share Gimlet’s award-winning podcasts with new listeners around the world,” said founders Blumberg and Lieber. The duo hope the deal enables them to increase the international visibility of successful shows like Homecoming, Reply All or Crimetown.

The impetus of the deal figures to be obtaining new revenue streams. Podcasts date back to the 2000s and were touted as audio versions of blogs. The people behind the pods were also similarly principled. In fact there was a real aversion to monetizing. Incorporating ad breaks into podcasts is now ubiquitous, as is producing “made-to-order” podcasts for other companies. But to reach the goal of being the HBO for audio Gimlet needs a subscription model—which is now in play through the Spotify takeover.

“We believe it is a safe assumption that, over time, more than 20% of all Spotify listening will be non-music content,” says Spotify founder Daniel Ek. In 2019 alone, Spotify is planning on investing USD 400 to 500 million in its podcast business. The plan would seem to be clear: Spotify will divert Gimlet’s millions of fans to the mother platform and thus challenge Apple’s status as the undisputed number 1 podcast platform. To do that will, however, require that Spotify offers the content exclusively, as is currently the case with Crimetown, one of the most-successful Gimlet productions. Simultaneously that means the age of free podcasts is coming to an end and that the medium is growing up.

At OMR19, Gimlet co-founder Matt Lieber will take the Conference stage to discuss these latest developments on the podcast landscape and how Gimlet intends to spearhead the vanguard of change. You want to be there? Then get your ticket here.

Jon Steinberg was the long-time COO at Buzzfeed, and is therefore no stranger to what it take to build a large digital publisher from the ground up. However, that is where the similarities stop between his ex-employer and his latest project Cheddar. With Cheddar, Steinberg is focussing on offering millennials financial video content. Business Insider is dubbing it the “CNBC for Millenials.” “Our bet is that the linear format—cable news—gets rebooted for people under 60,” says Steinberg (Back in late 2017, we reported on Cheddar shortly after its launch).

At the moment, there are two channels broadcast on the website (Cheddar and Big News), which is reminiscent of linear news broadcasters with familiar elements such as a ticker with the day’s financial news headlines and its daily live broadcasts from the floor of the NYSE. The interviews conducted during live programming are then repackaged in snackable video bites and placed on the website or made available to the major platforms. “The delivery is all over the internet. As opposed to traditional TV system, we are very aggressive in distributing the clips across all social media platforms,”says Steinberg.

Steinberg is banking on an increase in online news consumption for a younger generation. According to its own data 13% of Americans in the 18-24 demographic watch Cheddar, meaning that hundreds of thousands tune in daily. For their part, large investors are buying what Cheddar’s selling; AT&T, Amazon, Comcast and Goldman Sachs are among the investors. With a total of USD 54 million in investments in Cheddar, Steinberg is now setting his sights on Europe. His plans for breaking through on the European market and just how he plans on monetizing the video content will be at the center of his talk on the Big Picture Expo Stage at OMR19 this May 7 & 8.

After podcasts and videos, the third publishing topic on our list is a niche publisher. One such company dominating at present stateside is papa-publisher Fatherly. Founded by Michael Rothman 5.5 million visitors consume the site’s content aimed at young fathers. Rothman was previously a founding employee at Thrillist, and while he was there began amassing eMail addresses, to which he sent a variety of papa content. This list eventually was the genesis for Fatherly. “I spent the better part of 10 years marketing to young, single people. Then a funny thing happened,” says Rothman. “They were no longer as young and single anymore.” But he didn’t like the sites he saw in the parenting space. “They took an overly serious or sentimental perspective, or they took an abjectly caricatured perspective and portrayed the guy as the doofy dad who’s failing his way through parenthood.” 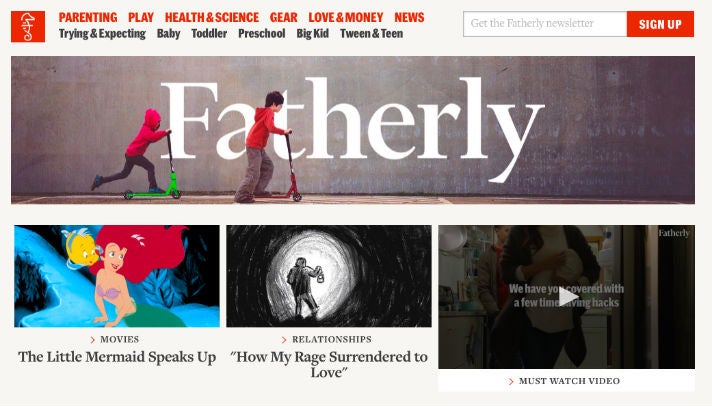 Fatherly sources readers from Social Media (2.9m Facebook fans) and via search, which Rothman says is working quite well at the moment. The newsletter has over 250K subscribers and he monetizes his reach with native ads (one out of five articles is created with a partner), banners and affiliate links. Rothman is especially aiming to expand the company’s eCommerce endeavors—but some 99% of revenue still comes form ads and partnerships. The strategies that Fatherly plans to employ to further bolster its niche position and expand its reach, will be discussed in detail by Fatherly founder Michael Rothman on the Big Picture Expo Stage at OMR19.

Wanna see the trio of New Yorker media stars live alongside hundreds of additional speakers on the OMR Festival stages? Then be sure you’re in Hamburg on May 7 & 8 for OMR19—get your ticket now before they’re gone.