F*** You Pay Me: Lindsey Lee’s fight for fair pay in influencer marketing

Taking on the Instagram paygap with data: FYPM aims to become "Glassdoor for influencers"

Companies invested nearly USD 10M in influencer marketing campaigns across 2020, according to a current study. Obviously, those figures are skewed heavily towards the top, with few earning millions and thousands earning little—with many not getting as much as the shirt, dress or accessories they’re plugging.

Lindsey Lee is fighting against this massive pay discrepancy—and for increased transparency. To amplify her message, the native Texan has set up a database with the abrasive/combative name “Fuck You Pay ME” (FYPM). Here, influencers can enter in the amount of money a brand has paid them for which job. The overarching goal is to provide other creators with a roadmap towards fair deals and fair pay by providing them with a reference before they enter into a new agreement. OMR spoke to Lee about the influencer paygap and how she hopes to implement her tool to effect industry-wide change in favor of creators.

Combatting sexism with selfies. And irony

Lee knows first-hand just how loath many companies are not only to send influencers the products they’re meant to promote, but also to pay them for their posts. Since 2019, Lee operated the oft-serious, oft-ironic Ms Young Professional Instagram channel. Donning the role of Ms Young, Lee plays the twenty-something young profesional, combining selfies in office attire with texts dealing with the inequality in the job world that women have to face—predominantly tongue-in-cheek texts, sometimes cutting in their honesty.

“I created Ms Young Professional, when I was working in finance,” Lee says. “I was just really frustrated with all the sexism [at the workplace].” She says the persona she created for her Instagram account and the corresponding blog blog quickly became “a fun, creative outlet for writing and blogging and comedy. Ms. Young has 17,000 followers on Instagram. At some point, the first fashion brands reached out to gauge her interest in wearing their attire in her posts. Large sums of money were never discussed.

From finance to flatulence

Eventually she was fed up with finance and crossed over into the social media marketing department of a startup specializing in bathroom sprays. While “writing poop jokes for a living,” she got to see the influencer business from a variety of angles. “I saw all these differences in how people get paid and influencers get paid,” Lee says. “Businesses are going to do what businesses do. They’re going to try to get out of paying people whatever, for whatever reason they can.”

Her annoyance at the staus-quo only turned into opportunity after she lost her “shity” job thanks to the genuinely shitty corona pandemic. Forced to move back in with her parnets, her relationship with her boyfriend deteriorates and ends. The sudden influx of time finally gives her the chance to focus on an idea she’s had for some time: creating a “Glassdoor for influencers and freelancers.”

FYPM. A company born of angry and frustration

Lee solicits the support of a friend to set up a landing page and she drafts a typeform survey, linking it to Airtable and names the project after a line from Goodfellas. The line, which has enjoyed added fame thanks to hip-hop culture, further serves to communicate clearly that payment is not negotiable. Lee then announces in a long blogpost to Ms Young Professional why she, the person behind the persona, is founding FYPM. 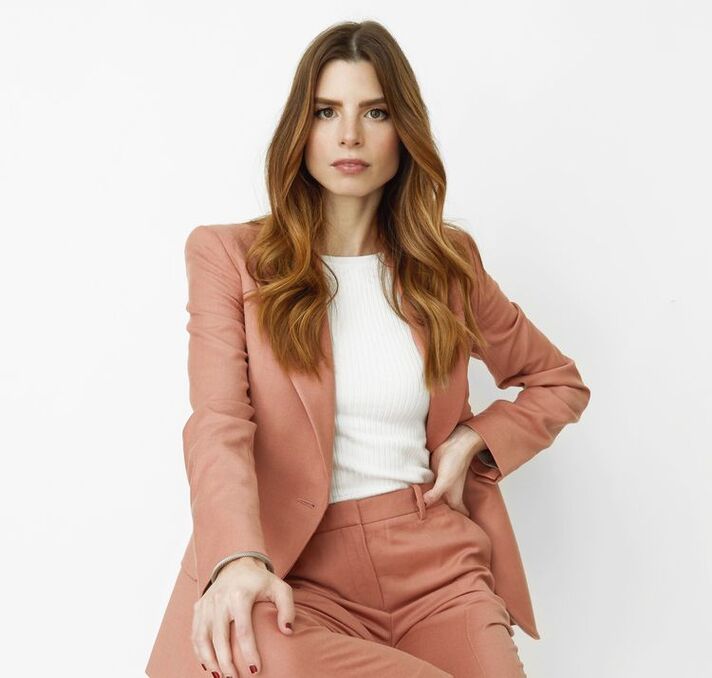 Lindsey Lee, founder of “Fuck You Pay Me,” a database aggregating compensation received by influencers and freelancers (image: Sissy Martin)

“FYPM F*** You Pay Me is a company birthed out of rage. 100% warranted, Grade-A female RAGE,” Lee rants in her post. After a steady stream of infuriating experiences of not being taken seriously because of her gender to a permanent rage at people offended that she’d want to be compensated fairly for her work, she aims to combat those “assholes [who] raise millions of dollars in funding to develop a new platform “for influencers”, that’s really just another platform designed to help more business owners exploit influencer talent, but in a new “innovative” way!”

Lee’s Insta-rant is full of figures illuminating the inequality in compensating influencers. In fact, there are significant inequalities in the compensation based on race among influencers. Lee implores her community to no longer simply accept the status quo, writing, “influencers are NOT the simple-minded, easily replicable, walking talking Barbie dolls the industry media tells us we are, and influencers are NOT powerless, literally, like at all. On the contrary, we’re the ones running this entire f****** show.”

“After I made that post, I received about 200 signups—without having a product,” Lee tells OMR. A couple of days later, a “friend from the tech scene” reaches out, looking for a new project and agrees to help Lee built her MVP (minimum viable product, a very trimmed down initial product). In the fall of 2020, FYPM is launched and every week more users sign up. Lee says that at the moment, FYPM grows “on average, by 10% week over week.” A half a year after launch, roughly 1500 people have created a profile and FYPM has received 1200 reviews on 850 companies. 54% of users are from the US and 12% come from the UK and Europe.

It must be said, of course, that the sample size is too small to extrapolate anything definitive—but Lee’s data certainly shows some clear tendencies. E.g., for the identical post, a company paid one influencer USD 125 and another USD 40,000. Granted, that’s an extreme case, but one that her data shows. Another, more nuanced tendency, is the impact working with an agency has on a creator’s compensation, according to Lee. Also, unsurprisingly, men are paid more or more often, with the FYPM data indicating that in 2/3 of all cases, men are compensated, compared to women who only receive money half of the time.

In April of this year, Lee is invited to take part in an accelerator program, where she comes into contact with programmers and meets her current co-founder, a former data analyst at Facebook. During the week, the MVP is crafted into a full-blown product and the revamped site is launched in early June. She says that there are additional features in the works for the site, but they won’t be fit for release until a later date. For the time being, the focus is on accumulating users and reviews. For the moment, the majority of the 1000-plus companies listed have fewer than 10 reviews, which is the minimum threshold to “unlock” the name of the brand on the receiving end of the reviews. Companies with fewer than 10 reviews only have their area of activity and company size displayed.

However, the central benefit to FYPM users lies in the unlocking of the company name. So that influencers contemplating a co-op with fashion shop “Shein,” (which OMR’s German colleagues recently portrayed) for example, can know in advance that only 31 percent of influencers are satisfied with their co-op with the brand and that each received a maximum of 500. Several influencers stated in their reveiews that their point of contact cited limited budgets in an effort to keep compensation low. This information, coupled with Shein’s planned IPO and valuation of nearly EUR 40M, can certainly aid influencers in negotiating fair compensation.

Reviews on FYPM can be filtered by several different criteria, including number of followers, location, industry, and so on. Each review also contains specifics on the type and scope of the co-op, on the communication with the contractor and occasionally entail advice to FYPM readers (“Go high – they have $$$”).

Series A and an FYPM business portal

Lee sees medium and small-scale influencers, as well as newbies as her primary target group, whom she not only hopes to provide with a frame of reference, but also with the chance to network and broker jobs in the future. There are also plans to add a business portal to FYPM, through which companies and agencies can connect with influencers suitable to their respective brand. We’re getting ahead of ourselves, however. Next month, in July, there is an upcoming round of Seed funding, in which Lee hopes to raise the capital needed to elevate the awareness of her platform. Then later this year, or possibly in early 2022, Lee has set her sights on Series A funding to further expand FYPM’s toolbox.

The face of Mark Jacobs

In the meantime, Lee hopes FYPM helps others avoid the frustrating experiences she was forced to endure during her career as freelance model. “I was a pretty successful freelance model, but it’s so hard to get paid,” Lee recalls. She was thrilled, for example, when she landed on the cover of Germany magazine “ZEIT,” but it was the photographer, and not her, who got paid. Then there was the time in 2015, where she beat out 750,000 applicants to be one of eleven in a Marc Jacobs’ campaign. “I was the face of Mark Jacobs, on billboards all over the world. In magazines. On shopping bags and all sorts of crazy stuff,” Lee says. But she was only paid 1000 dollars. “To this day, it was my highest paid gig ever for freelance modeling.”

Although she “thought it was cool” at the time, the days of accepting such a deal appear to be history, as her blogpost announcing the launch of FYPM points out. “FYPM is here to help influencers separate fact from fiction and see through the veil of lies that keep us all in the dark, stupidly undervalued and painfully underpaid.