This European travel blog is bucking the trend and growing.

Funding the Culture Trip by OMR

Drops in traffic, widespread layoffs and continued monetization problems—the majority of recent news emanating from the digital publishing scene has been negative. But one European publisher has thrived: London-based travel publisher Culture Trip, generating nearly USD 80 million in brand-new capital in a round of Series B funding. OMR takes a closer look at just who the start-up is and uncovers its plans at becoming a massive digital travel agency.

After years of continued growth throughout the digital publishing branch, reality has set in. First, US viral publisher closed up shop last February as the change in Facebook’s algorithm slashed its organic traffic—the bread and butter for any digital publisher. While gaming publisher Rockyou Media snatched up Littlethings in April and put the IP back on line, it did so after trimming down nearly 75% of its workforce.

Littlethings is hardly the only digital publisher to fall on tough times: In the months before there were layoffs at at Vox, Refinery29, Buzzfeed, , while European publishers, too, were hit hard.

While the industry struggles have cast a wide net, travel site The Culture Trip keeps on trucking, increasing its reach threefold: company figures on its about page show a growth in unique users from four in late 2016 to the current 13 million. It’s a ridiculous amount of growth in the ultra-competitive travel industry and stands out even further when compared to other travel publishers: fodors.com and cntraveller.com and big fish like timeout.com traffic and reach have either stagnated or shrunk. While Timeout still has more uniques according to SimilarWeb at the moment, it is more than plausible that Culture Trip catches up to or even passes the competition.

So, what is Culture Trip doing differently to make it so successful that Dutch PPF Group, after investing USD 20 million in a round of Series-A financing in October 2016, upped the ante with another USD 80 million in Series-B financing? 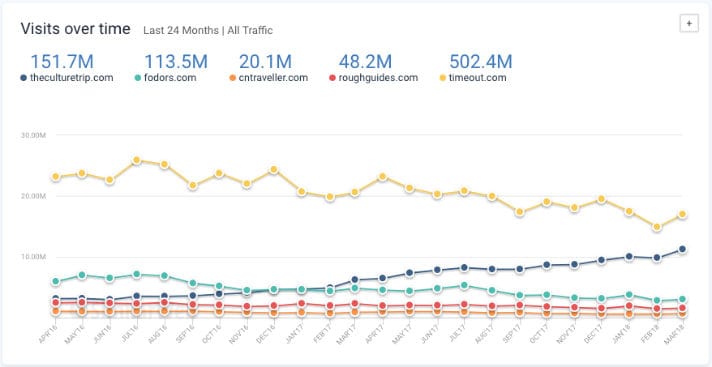 Traffic figures in the past 24 months for theculturetrip.com, fodors.com, cntraveller.com, roughguides.com and timeout.com according to SimilarWeb

From academic to start-up founder

The person behind Culture Trip is Kris Naudts, a Belgian with a PHD and a former practicing psychiatrist. After growing weary with a career in academics, he starts looking for a way out in 2010. “I’ve always loved storytelling and culture, and I’ve always wanted to build something,” he told Techcrunch. Thus, the idea is born for a website based on an interest in cultures around the globe; in early 2011 he launches theculturetrip.com.

The first person Naudts hires is Ewa Zubek, after a coincidental meeting right around the time the site is launched. Although he hires her purely based on her anecdotal desire of becoming a writer, her longevity attests to the fact that she’s got a knack for it as well— as does the fact that Naudts names her Editor-in-Chief in 2015 after collecting USD 2 million in seed funding. At the time, she coordinates 30 freelancers around the world, who are responsible for creating the site’s content.

Ewa Zubek analyzes the traffic and evaluates just which topics work best: especially content on restaurant tips, local attractions and locations off the beaten path generate an above-average amount of revenue. Once that becomes clear, the site begins focusing on concrete suggestions and insider tips for popular travel destinations.

Currently the model is delivering roughly 3000 new articles a month according to Kris Naudts. Since launching in 2011 there have been roughly 75,000 total articles published. If you compare that figure to the amount of raised capital, USD 102 million, the “value per article” comes out to be USD 1360. While not a common KPI, it does illustrate how lucrative a network of freelancers can be when they connect with the target group.

But what about those 12-13 million visits a month? Where are they coming from? And who exactly is the target group from Culture Trip?

SEO traffic instead of social clickbait for millennials

In the early days of Culture Trip, one particularly effective lever for traffic was restaurant articles. Ewa Zubek says the team would always be sure to reach out to the owners and inform them about the publicity. “They’d be like, ‘I can’t believe you wrote about us. You wrote about our city, this is so amazing. We’re going to share this.’ And they’d share it with their network.”

According to Similar Web, nearly 83% of traffic to theculturetrip.com came from SEO; nearly 8% entered the address directly and 7.9% came via social media. Its core audience consists primarily of millennials as nearly 57% of all users are under 35 years old; 25% come from the USA, while 13% are from the UK.

Its success in search-engine marketing is also backed up by data provided by SEO tool Sistrix. Culture Trip ranks number 1 for more than 1300 Google keywords stateside, including “calgary club,” “williamsburg cheap,” “park tokyo” and “garden rome,” which deliver tons of traffic according to Sistrix. Its visibility index score, too, is remarkable, increasing nearly seven-fold in the past two years.

Visibility trend for theculturetrip.com in the USA (click to enlarge, source: sistrix.com)

Millions of fans and followers despite limited traffic relevance

Culture Trip’s social media profile figures to have a significantly less prominent role in the website’s traffic. Still, the number of fans and followers is remarkable: On Facebook some 5.1 million jetsetters have left a like, while the Instagram channel is followed by just over 280K across three accounts (“culturetrip“, “culturetripfood” and “culturetripbooks“); the Twitter channel has approx. 123,000 followers and on Pinterest.

No matter the channel, Culture Trip publishes native advertising content either parallel or in addition to the normal articles, and it’s this native advertising content that is the main source of income for the company. According to Ewa Zubek, there is a deal with a European board of tourism in place, which set 80K reads for an article and 100K views for a Facebook video as targets. The result: 100,000 readers and 1.6 million views. “We delivered an amazing result, and the brand has come back this year and said, ‘let’s work with you again because we loved it.’”

The company, however, is aiming for a third source of revenue—and in this quarter no less. Moving forward, the portal operators want to operate as an online travel agency, aka OTA, by offering bookings directly on the site. Under the new model, software maker Digital Trip will provide content and availability, while Culture Trip will act as a merchant, taking over processing and customer service duties according to a report in Phocuswire.

Culture Trip has millions in (a) Czech

Culture Trip, however, isn’t going for more, but rather less, offering an array of hand-picked hotels that fit the site and the target group. And there is precedence for it in the UK with Mr. and Mrs. Smith (founder Tamara Lohan held a keynote at OMR Festival 2017) employing a similar strategy successfully. The next step for Culture Trip could be branching out into the flight booking business, according to Anthony Anderson, Director of Product Monetization in the aforementioned Phocuswire article.

These prospective growth opportunities surely played a significant role in getting investors to open their collective pocketbooks and pump in an additional USD 80 million. In total, Culture Trip has collected a total of USD 102 million. The lead investor is the PPF Group: a financial company headquartered in the Netherlands owned and operated by Czech billionaire Petr Kellner. Before the latest round of financing, Culture Trip was valued at GBP 54 million according to a Forbes article (approx. USD 61 million). While the current valuation is not known, a realistic ballpark figure puts it in the range of USD 400 million.

Founder Kris Naudts told Forbes before the latest round of funding that he had not ruled out acquisitions and an IPO. This year, the company is aiming to reach the 400 to 500 mark for full-time staff members, while expanding the network of freelancers to 1000. To reach these goals, Naudts has already successfully acquired some big-name, experienced industry pros: as CMO Michael Fox former Director of Marketing at Facebook from 2009 to 2014, Chief Revenue Officer Dick Soule ex-Global Head of Sales at Youtube from 2013 to 2015, while monetization head Anthony Anderson spent several years as director of product development at British taxi app Hailo (since taken over by Daimler and a part of Mytaxi).