When it comes to crazy ideas that become online juggernauts, we’ve seen it all. Or at least we thought we had until we discovered a German artisté, who’s turned modeling clay into a massive reach driver with over 3 million subscribers and 420 million views on YouTube. Every Friday, Simon Haase, aka Clay Claim, gives his flourishing community what they crave——new clay content. Now, he’s fashioning his reach into a standalone business. We spoke to him about trends in clay, how clay translates to eCommerce and his plans for his own film studio.

In 2016, Haase was running his own company, which dealt primarily in the creation of websites. Haase is not happy, lacking something he couldn’t quite put his finger on. “I remember sitting in front of my screen, in a trance, thinking, ‘what am I doing with my life?’ Then I started recalling all the things that made me happy as a child,” he told OMR. One of the things Haase was passionate about as a tike was molding figurines out of clay, so he started rekindling his passion. “I made my family figurines for Christmas and filmed myself while doing so. In the end, I had 12 videos,” he said. He gave the figurines to his family; he put the videos up on YouTube. It’s the birth of “ClayClaim,” his YouTube channel.

The start was rocky with only a handful of viewers tuning in as he makes Asterix, Mickey Mouse and others out of clay. “But there was a moment, where I thought I might be on to something.” One night, after his young child has kept him up, he makes a Pokémon figurine and uploads it to YouTube. “It was the first time that a video of mine cracked 100K views,” Haase recalled. That unexpected and relatively sudden success sent him down what would eventually be the road to 3 million subscribers on Youtube.

The art of clay

It doesn’t take long for even novices to notice that Haase is not using the playdough you grew up with. He uses a special polymer clay composite that is PVC-based and very elastic thanks to softening agents. The material mimics the consistency of standard Playdoh or modeling clay. A shared characteristic of modeling clay: once the clay has been worked into its final shape, the figurines are placed baked in an oven, where they are hardened and keep their shape. 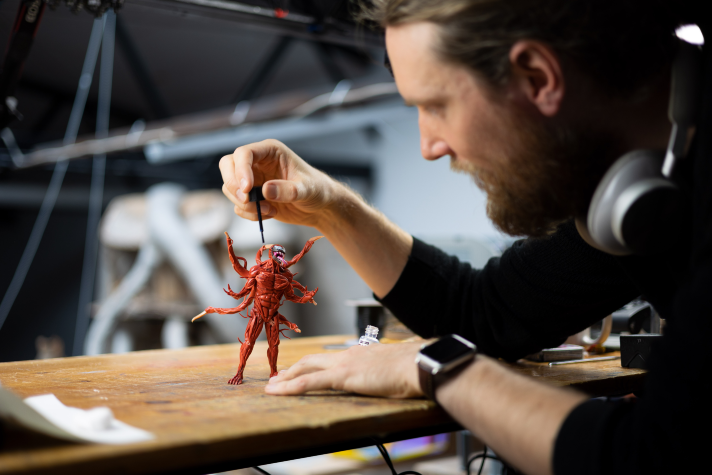 Simon Haase putting the finishing touches on Carnage, a character from the upcoming film “Venom: Let There Be Carnage”

The Clay Claim videos follow Haase every step of the way, from clay kneading to finished figurine. He provides amusing commentary of what he’s doing, part tutorial, part anecdotes and all show. It’s hard not to get swept away by his energy, like in this recent video featuring Haase making Venom. Ranging between 10 and 20 minutes, his videos are much shorter than the actual time needed to create a character from scratch, which Haase says can take up to four days. His creations are primarily movie characters or settings and those from video games. “If my videos have passion, talent and address a current interest then they work. In my case, Pokémon Go created the needed interest in my videos.” The mobile game, if you recall, was all the rage back in 2016 and Haase rode the proverbial hype train and made his Pokémon figurines.

Gotta have the nerds

When he starts off on YouTube, Pokémon Go is scorching hot. Having seen the proverbial light, Haase keeps a keen eye on what’s trending and dedicates videos with content from Clash Royale, Among Us and Fortnite, where figurines and settings from the games are the focus. “I try to maintain a certain amount of balance between trends and things that I personally have an interest in making,” Haase said. “You can completely forsake your own passion just to accommodate trends.” Nevertheless, he’ll be the first to admit that you do have to feed the animal and current hypes have been a growth beast for his channel. “The algorithm likes it when there are a few videos dedicated to the same topic. We are just now emerging from a Fortnite phase, which really worked well on our end. Now we can focus on some other topics.”

A big chunk of ClayClaim videos amass a few hundred thousand views within the first few days, with a healthy smattering of exceptional performers in there as well. His top-performing video, featuring him making a setting from the game Among Us, has been watched over 18 million times. “A lot of the viewers are gamers, who like seeing their favorite games in a slightly different light,” Haase told OMR. Videos with a million-plus views also directly impact the number of subscribers. In October 2020, when the Among Us video mentioned above came out, ClayClaim added over 220k new subscribers. Before and after that video dropped, the average number of new subscribers ranges from 10k to 60k. Although he’s German, he creates content solely in English for two reasons: “There’s more potential reach and when I started I thought if this flops, then at least I’ll have improved my English.”

Two additional reach strategies appear to have been very beneficial. The first is the publishing of content every Friday, which works as a kind of appointment viewing for fans. And secondly, under each top-performing video, Haase posts a link to his latest video, which he does on 300 different videos every week. Although he’s got 160k fans on Facebook, about 60k on Instagram and 6300 on Twitter, Haase says that YouTube is pretty much the only game in town for ClayClaim.

What started as one is now a team

As the reach grew over the years, so, too, did the production quality. “I started off as a one-man show—which is pretty evident if you watch our early videos. Today, a team of nine works on ClayClaim Studios and the ClayClaim Store,” Haase says. A team of professionals, mind you, who need to be paid. When he discusses finances, Haase sees three revenue pillars: income from Youtube ads, brand deals and revenue from the online shop. “Somewhere along the way, someone asked where we got our modeling clay. We now do about 90% of our sales in the States,” he says. “More recently, there were delivery problems with modeling tools. So we began producing some of our own here in Remscheid (Haases’s hometown and base of operations in Germany) and selling them in our shop.” In addition to various clay types from Staedtler, self-produced tools and merch, Haase also sells DIY-sets of the figurines featured in his videos. Each set includes pre-colored clays, the right tools and an instruction booklet on how to make the figurines; set prices vary between 16 and 40 euros. 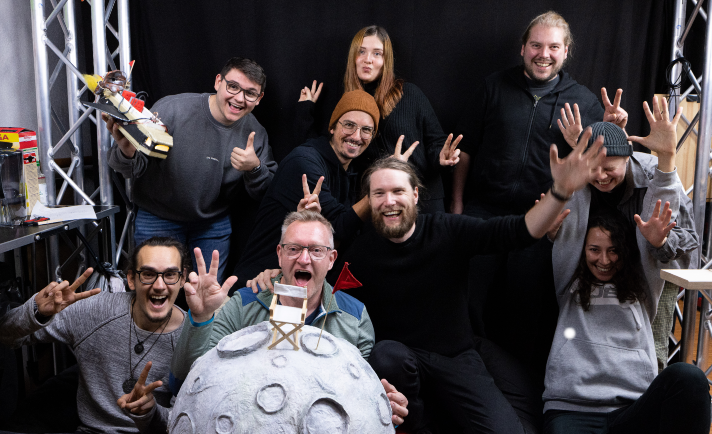 Simon, aka Clay, and the entire ClayClaim team

As with so many other digital brands, the corona pandemic has been a growth driver for ClayClaim. “The first few months in 2020 saw our views just explode and while that was going on, demand for clay skyrocketed as well. We had some issues dispatching orders due to delivery issues.” Haase says, however, that the biggest source of revenue continues to be brand partnerships, which then dictate which figurines or worlds Haase makes. Major games publishers, like Riot Games promote new games on his channel. Occasionally, he creates exclusive content series, which his partners then use on their channels. Taken together, the three revenue streams add up to 6-figures in annual revenue.

Haase says he has no designs on becoming rich and is instead focussing on his latest vision: his own film studio. “Every euro we earn goes right back into the product, the studio and the stop-motion film.” He says his team is already working on its first film project, entitled “Mole Monastery.” “It won’t be released to theaters. Instead, it will be interactive and the community will be able to decide how the storyline progresses. It’s a fantastic format for YouTube—and that’s where we made a name for ourselves,” says Haase. For that project, he has placed his faith entirely in the hands of his team, while he continues to take care of the YouTube channel. “I’ll be making Friday videos until I keel over.”

To get the film project off the ground, ClayClaim is now launching a fourth revenue stream: Patreon. “On YouTube, my face has become associated and synonymous with the brand. As I go, so goes the company. But we are moving towards studio status and are producing a film. On Patreon, we have the chance to feature the team and have everyone get closer to the community,” says Haase. Fans can pay either 5, 10 or 20 euros for a ClayClaim subscription on Patreon, which also gives them various goodies, from exclusive ClayClaim content, a membership to a team Discord channel to discounts in the online shop and gifts from the team. It’s also on Patreon, where Haase is keeping the community up-to-date on the progress of the film, for which the premiere is coming soon.