While NFTs have been grabbing headlines around the world, analogue trading cards, the OGs in modern collectables have been doing just fine tyvm. From the sports world, where a 1952 Mickey Mantle and a 2019 Luka Doncic have fetched USD 5.2m and USD 4.6m this year, to trading card games (TGCs), such as Pokémon, Magic: The Gathering, Yu-Gi-Oh! et al, the allure of finding a valuable amongst your old card collection has inspired hordes of modern-day treasure hunters. But where do you go to find out how much your collection is worth? For TCGs, the authority in Europe is Berlin’s Cardmarket. However, Cardmarket is more than just a pricing guide: it’s also a resale marketplace and puts on one of the most-prestigious card tournaments in the world with the “Cardmarket Series.” OMR spoke with CEO Marko Schädlich and Cardmarket’s social media manager Jamin Kauf about Cardmarket’s journey from an online shop aimed at passionate gamers to its rise to the authority for the most prestigious trading card games in the world. It’s a story of passion, business cunning, YouTube and, of course, magic.

When last October Youtube superstar Logan Paul (23 million+ followers) livestreamed himself opening a box of Pokémon cards valued at USD 200,000, the price of Pokémon cards shot through the roof. Then a new record was set in December when a Pokémon error card of a shadow-less Charizard fetched USD 369,000.

According to StockX, the global market leader for buying and selling rare and valuable goods (here’s our StockX profile from last year), Germany is the second-largest market for trading Pokémon cards. The TCG hype (trading card games), however, is by no means limited to Nintendo’s Pokémon with cards from games such as Magic: The Gathering commanding top-dollar 30 years after launch.

Cardmarket is one company that’s profitting from the current boom in particular. Based in the German capital, Cardmarket and its team of 50 operate the largest online market place in Europe. According to Cardmarket, half of million users buy and sell over 100 million listed products, from individual cards to entire boxes and accessories. The Cardmarket saga begins in 2007 with 20-year-old Luis Torres. Living and studying in Berlin, Torres spends the bulk of his free-time playing TCGs. At some point, he has a moment of enlightenment: he could transform his hobby into a profession. The epiphany crystallizes into an idea for a startup. A website follows that entails a marketplace and a card shop specifically for Luis’ preferred game, Magic: The Gathering.

One year later, Matthias Knelangen joins the fold with Marko Schädlich coming on board in 2013; to this day, all three are stakeholders and actively involved in the company. “When Cardmarket first went online, card traders typically used print catalogues. There had yet to be a website dedicated to buying and selling trading cards,” Schädlich told OMR. When Schädlich joins the team, one of the first moves is to shut down the online shop. They say that material and shipping costs were simply too high and that it made more sense to concentrate on the much more profitable marketplace.

“At that time, each game had a separate marketplace,” recalls Schädlich. It was not until 2017 that they consolidated the four biggest games Magic, Pokémon, Yu-Gi-Oh! and Dragonball Z into a single, unified marketplace and thus laid the foundation for what would soon become Europe’s largest online marketplace for trading cards.

Cardmarket says that there are nearly 500k users from 30 countries who have posted approximately 100 million offers. No other platform in Europe can claim to trade more new or used products from the 12 TCGs Cardmarket covers. The lion’s share, nearly 50 million of them, are individual cards, aka “singles,” with card sets, boxes, displays and accessories making up the rest.

Germany is Cardmarket’s most important individual market with analysis tool Similarweb placing one-third of all monthly visits, an average of 7.5 million, originating from the Fatherland. Schädlich declined to offer specifics on revenue, but did tell OMR that each sale nets Cardmarket a 5% commission of the final sale price. Schädlich says that commission is Cardmarket’s only source of revenue as it does not run ads on its website.

Millions of “pennies” and a few diamonds

Trading cards have begun to attract the attention of professional investors. Rare cards in good to near-mint or mint condition that are no longer in print can quickly fetch round about USD 1k. Alternatively, they can quickly plummet in value, if for example, a card maker bans a card, i.e. making it illegal to use in tournaments. “If that happens, a €20 card can drop all the way down to €2, which is a 90% drop in value basically from one day to the next.

Many of the cards on the platform can’t drop in value at all as “90% of all singles available on Cardmarket are sold for a penny.” Schädlich estimates that only 1% of all cards eclipse 100 euro with the super expensive cards only accounting for a fraction of a percent of all cards. 193 of the several million cards for sale on Cardmarket are sold for more than 1000 euro. The most-expensive card currently on the platform is from the flagship game Magic: The Gathering: three black lotus alpha cards offered by three different persons for a minimum of EUR 189,000. 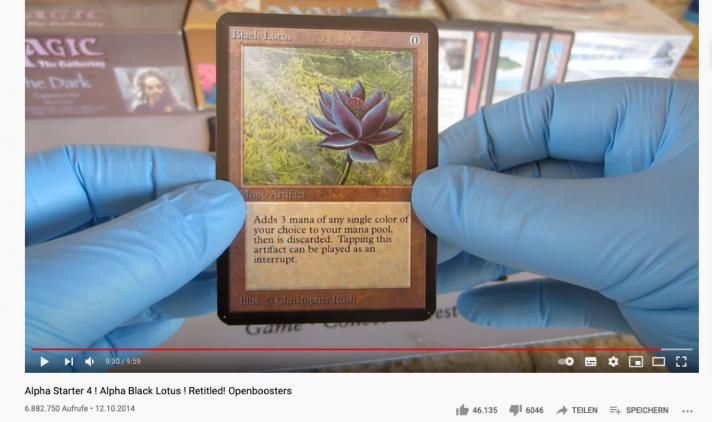 On Cardmarket collectors can find one of the most-valuable cards in the world: the Black Lotus Alpha. For sale on cardmarket.com right now (act now!) for USD 189,000.

Depending on the game, sellers on Cardmarket are between 18 and 50, mostly individuals with a few professional investors and traders sprinkled in. As is the case with other platforms of a similar ilk, the founders are loathed to let minors engage in anything approaching selling professionally. Schädlich says that anyone who’s over 18 and gets close to a certain revenue threshold is contacted by Cardmarket. “We have internal limits for private sellers. If they near it, we reach out and recommend that they register their activities with the regulatory authorities. It protects us from any possible legal consequences,” says Schädlich. There is no set amount for when someone must register with the chamber of commerce according to Schädlich.

The Pokémon hype has, of course, helped the platform enormously. According to Google trends, the keyword “cardmarket” has increased in frequency by 75% since October. When it comes to users on the website, Schädlich says that there are no overarching trends and it depends on the individual. “Some haven’t played any games in years, one day find a box of cards stashed away under the bed and then restart buying sets on Cardmarket,” says Schädlich. “On the other hand, there are those who purchase sets straight from the manufacturer, hoping that they pull something valuable and can then resell them on our platform. Plus there are the users engaging in arbitrage, people who “buy low and sell high on the platform.”

The search volume for the keyword “Cardmarket” has exploded in Germany by 75% since October 2020.

Top-10 for Plunder the Graves, Devour for power and feline ferocity

While the marketplace trends towards consolidation, the exact opposite is happening on social. “If you are a Yu-Gi-Oh! player, you won’t need to scroll through Magic news and content on Instagram,” says Jamin Kauf, social media manager at Cardmarket. “That was the primary motivation for us to create a dedicated social media channel for each major game.” He says that across all channels, i.e. Instagram, Twitter and Facebook, Cardmarket has a total of 150,000 followers.

Cardmarket also produces its own blog content designed to improve its SEO ranks. Since the products have their own names, Kauf says that leads to very specific, “nichey” keywords. According to SEO analytics tool Sistrix, the Cardmarket domain has over 22,000 keywords that rank in the top-10, including such gems as plunder the graves, devour for power and feline ferocity, all of which are in the top-3. Also worth noting is that the card catalog records every card that was ever offered on Cardmarket, including its image, description and price history, which simultaneously figures to be the largest digital card collection anywhere on the interwebs.

Cardmarket, however, is much more than just a trading platform for the TCG community. It’s also behind one of the most important tournament series for active players, the “Cardmarket series.” Typically, five events are held across Europe, from Paris to Prague to Barcelona and beyond. Each event draws between 1500 to 2000 players and pits them against each other in a single-elimination tournament.

It’s a loss-leader for Cardmarket and is written off as a marketing and community-building expense. “It’s not easy attaching people to you emotionally as a marketplace. That’s where the series comes into play,” says Kauf. “It brings the community together,” Schädlich says, “and gives them a place to indulge in their love of playing.” Cardmarket works with industry influencers like Thoralf Severin and Riley Knight and sponsors over 100 players. Corona squashed the 2020 series, although Cardmarket incurred significant losses and filled a warehouse with the necessary equipment for the series. Then the lockdown came and moved everything to the digital space.

The Cardmarket team was not entirely prepared for the (fingers crossed) once-in-a-lifetime event, but in the past decade-plus have created an ecosystem that is purely digital. The fact that YouTube stars have given the trading card game a jolt was a stroke of luck, but luck, as they say, is a part of the game.