Neo Brokers, i.e. the new type of finance app that permit users to trade stocks, usually without any additional fees, are having a moment. Popping up all over the place, companies like Robinhood, Scalable Capital and Trade Republic seem unfazed by the COVID-19 pandemic. Dutch startup Bux Zero is no exception. With an aggressive referral system that promises free shares, Bux claims it’s acquired several thousand new users in less than two months. Finance Forward and OMR spoke to one of the Bux founders about their success and found out that they have a significant advantage over the competition.

If something’s free, all bets are off as to what people will do for the freebie in question. Example: when given the choice between a free voucher worth 10 bucks or buying a USD 20 voucher for USD 7, they take the free one. It’s a phenomenon that MIT behavioral economist Dan Ariely has been monitoring. From chocolate to ice cream and Amazon vouchers, “Everybody has the same issue: that free is such a hot button that many times it tempts us so much that we end up paying a high price or give up something better just for the allure of free,” he told NPR in 2008. People chose the chocolate they don’t really like or will put up with long lines for a scoop of ice cream. All because they don’t have to pay a thing.

Bux has also taken note of this tendency and used it in its customer acquisition campaigns it recently launched in Germany to great effect. The Amsterdam-based app enables its young-skewing customer base to trade shares, ETFs and the like. To increase its user base it used a classic referral campaign that rewarded existing users who referred new users each with a share from a randomly selected company worth “up to EUR 200,” as the campaign slogan promised. What set it apart, however, from your run-of-the-mill referral campaign, is the randomness and gambling aspects. Which company shares were included in the giveaway? And could such a strategy be profitable?

Founded in the Netherlands in 2014, Bux was already active in the Fatherland with a trading app prior to the aforementioned referral campaign. However, it failed to generate notable growth, as estimates by app analysis tool Priori Data indicate. Early in 2020, Bux, which is financed by venture capitalists Holtzbrinck Ventures, among others and received roughly USD 35m in seven rounds of financing, launched a new product. Bux Zero lets users trade stocks without paying high fees. A trade carried out in real-time on Bux Zero costs EUR 1. In doing so, Bux is competing with other neo brokers like Trade Republic and Scalable Capital.

While the competition popped up regularly in the headlines, Bux’s announcement nearly went entirely unnoticed: Two months after launching in Germany, the startup had acquired 100,000 German customers for its various apps. The marketing campaign was a massive growth driver and founder Nick Bortot told us that the campaign was directly responsible for two-thirds of the new users.

The combination of gambling elements with FOMO struck a chord with the campaign’s target group. Bux also experimented with making 1 out of every 20 shares a share of Apple stock, prior to Apple’s shares split when a single share was valued at over USD 400. The campaign’s slogan primarily focussed on giving away “shares worth up to €200.” The campaign is still thriving in Germany on discount portals such as Mydealz and Dealdoktor; plus thousands of comments by users begging to be referred. Bortot said the campaign was never intended to appear on deal platforms. In fact, Bux requested that the deals be removed as they didn’t correspond to their target audience.

“On average, the shares are worth between five and ten euros,” says Bortot. He told us that in Germany the startup chose to include shares from German and US companies as users would be less interested in receiving shares of, say, a French company. When we set up a test account, we won a share of US camera maker Gopro, currently worth EUR 3.36.

Given the average free share being valued at EUR 7.50 and that both the existing and new client each receive a share, the CAC (customer acquisition cost) is EUR 15. Thanks to the word-of-mouth marketing mechanisms that take hold in such referral campaigns, the Dutch fintech figures to save marketing expenses it would have otherwise invested in paid advertising on Facebook or Instagram. 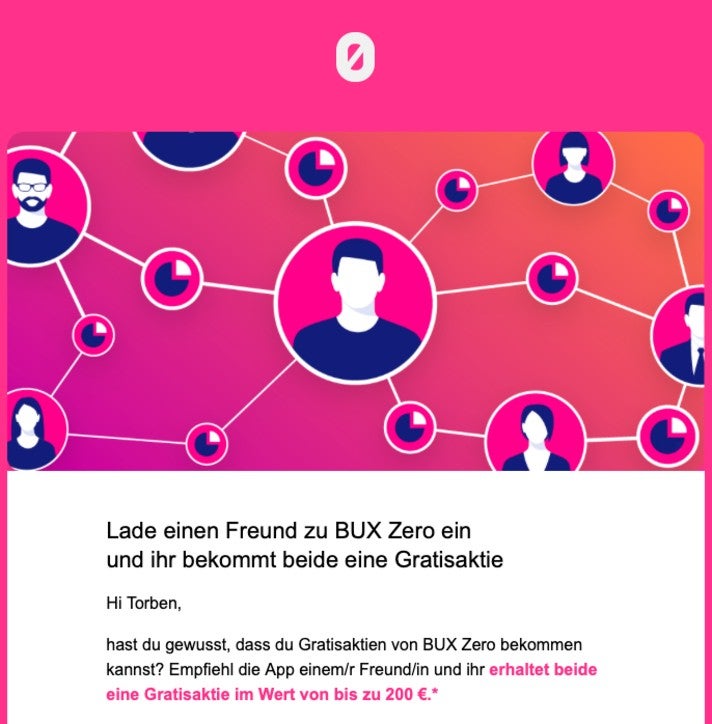 Competitor Trade Republic is also running a similar promotion at the moment. For every user referred to Trade Republic, existing users and new users each receive EUR 15, meaning they are paying double what Bux pays. And despite the fact that the Trade Republic deal figures to be the better, more valuable deal for the majority of users, the awareness Bux is able to generate through the gambling elements of the free-share mechanic would appear to be much greater.

Confidential documents from a competing neo broker that we have access to show that marketing costs per customer are as high as EUR 88. At the time, there was not the major run on startups that there is now. The COVID-19 pandemic has only seen this trend grow as millions of new trades are keen on profitting from the ups and downs on Wall Street. Stateside, you only need to look at Robinhood and its recent performance for evidence of the trend.

It would seem that Robinhood inspired Bux with a similar marketing campaign, which was also a primary growth driver for the Silicon Valley fintech. Simultaneously, it’s also been a source of criticism as it is one of many gaming-esque elements in the app. For example, when a trade is successful, confetti rains down. One of the many factors that give the app the feel of a video game, users report.

Bortot told OMR that he thinks confetti may be going a bit too far and that Bux is committed to developing an app that users enjoy using. “We want to show users that investing is fun,” Bortot told us. In contrast to Robinhood, the Dutch startup is not after gamblers, which is one reason why there is no options trading. “That would be like giving someone a stick of dynamite,” Bortot says. He says that Bux’s mission is to take new investors by the hand and show them the ropes, which includes keeping the number of products to a minimum. The main goal, he says, is to attract long-term investors. Bux includes several how-to videos for various aspects of shares trading.

Given the relative youth and inexperienced among Bux’s users, the volume of shares traded on Bux tends to be much lower than on typical brokers. Bortot declined to tell us what the average trade value is, but it figures to be in the EUR-1000 range, meaning that it will take some time before Bux can profit off of its customers. A significant portion of new users are not expected to use their accounts further after receiving the free share; bargain hunters are especially likely to have been drawn by the promise of a free share. While Bortot refused to divulge any figures, he said that Bux is not a charitable organization and that the promotion was a success, not designed to give user numbers a boost on paper—a common practice among fintechs, he says.

The company is, in fact, doing so well that Bux is considering opening an office in Germany. Bortot told us that Bux has 2.5 million users in 9 different countries. He was mum on if Bux intends on engaging in another round of financing to pay for the cost-intensive expansion, but it would be a very opportune time to do so if it did. Interest in trading is trending up and while US startup Robinhood recently collected another several million in funding pushing its total valuation to USD 11b, it put plans to expand into Europe on ice.