“Google has all but pulled the plug.” Why publishers are dropping AMP en masse.

Have we seen the last of the gold standard for mobile pages?

When Google introduced “Accelerated Mobile Pages” (AMP) in 2015, it hoped that by loading publisher pages faster it would lead to a traffic spike for Google. That has not only faltered, but in the past year, both large US digital publishers and well-known European publishers have stopped using AMP. Today, OMR is taking a closer look at how AMP has performed, why the rift between publishers and Google has seemingly become to great to overcome and showing examples of publishers who have recently stopped using AMP.

More than any other, the past decade has been dominated by the smartphone. Over 1.2 billion of them were sold in 2020—in 2010 that figure was just around 300 million. Accordingly, the number of people accessing the Internet via mobile has skyrocketed. While one in five people still used their smartphone to access the Internet in 2011; by 2015 that figure grew to two-thirds.

Later that same year, Google addressed the trend by introducing a new standard for mobile websites, “Accelerated Mobile Pages.” The concept was simply that by using a stripped-down HTML code, mobile websites could load faster, consume less data and generally offer an improved UX, which, in turn, would lead to a lower bounce rate.

AMP was primarily aimed at online publishers and publishers who used the product would see a little lightning bolt icon in the search results next to the URL. A better UX was not the only benefit for publishers—those that used AMP would receive preferential treatment in the Google News listings. How? Because the News Carousel at the top of the search results page or in the News Box is exclusively reserved for AMP publishers. For publishers both stateside and abroad, Google News provides a massive reach boost. Landing a coveted spot in one of the widgets on the first page of Google search results means that publishers can expect millions of readers for their articles, which then means millions in website traffic that can be monetized with ads. 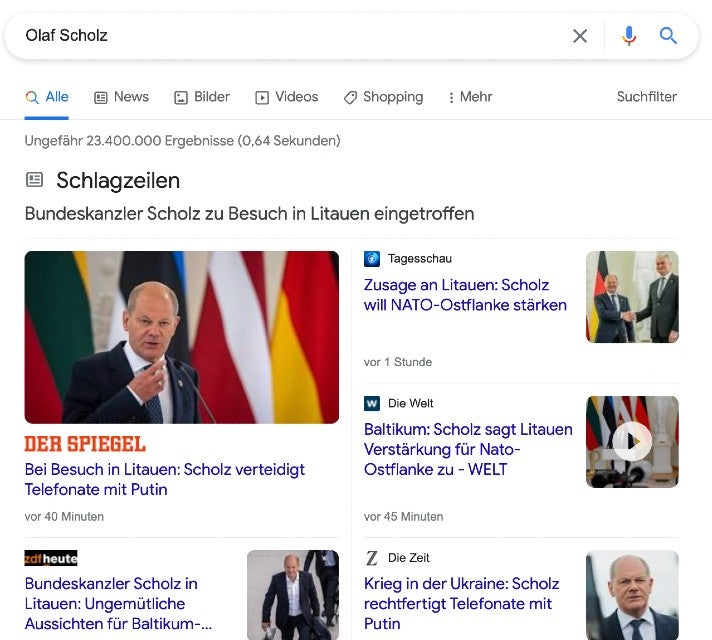 The Google Newsbox as it appears when searching for German Chancellor “Olaf Scholz.” This is where every publisher aims to be—here millions of impressions are generated. Screenshot: OMR/Florian Heide

For publishers both stateside and abroad, Google News provides a massive reach boost. Landing a coveted spot in one of the widgets on the first page of Google search results means that publishers can expect millions of readers for their articles, which then means millions in website traffic that can be monetized with ads.

For readers, AMP has struggled to attain widespread popularity: In Apple’s App Store, as a Tweet by tech exopert Ben Evans shows, there is an app available for a couple of euro-bucks, with which users can get rid of AMP pages via an automatic redirect to the regular pages. Publishers, too, have been critical, for example, of the limited technical options that AMP has. The page layout only offers minimal room for modification, while in some cases simple functions such as the share button or comment fields are not available in the AMP-optimized version.

But above all: instead of the promised increase in advertising revenues, publishers are faced with declining ad revenues. This is because reliable tracking of users is now more difficult than before with AMP. Furthermore, fewer ad formats can be integrated into websites using AMP than in the previous version. This has eroded further the already waning trust between publishers and search engines. Around the world, publishers have been seeking a collective agreement with Google—or lobbying lawmakers to force Google into one. Through 2021, Google has so far resisted all calls for any such agreement saying that Google’s platform is responsible for the reach in the first place.

In addition, Google also seems to be exploiting its own market power here. Several US states accused Google in December 2020, among other things, of intentionally throttling websites that do not use AMP in order to better position their product on the market. Google’s response was that it was all about improving load times. Johannes Beus, founder of the SEO platform Sistrix, is also very critical of Google. “At its core, it’s always been about Google trying to dominate the Internet more,” he says.

Those who use Google usually end up on a website that is not operated by Google, i.e. outside its ecosystem. “Here, however, users fail to leave their data and, thus, no ad revenue.” The actual reason for Google implementing AMP is that AMP-optimized pages are delivered by Google itself. “Anyone who browses an AMP page stays on a Google server,” Beus says. That would be to the company’s benefit. Because there, the company can track exactly how users behave on the Internet. And Google is better positioned to to monetize that behavior.

After receiving widespread criticism, Google made an initial attempt back in April 2021. In an update on the user-friendliness of the pages, the company announced that AMP mobile optimization will not be necessary in the future to have article appear in the News Box. Instead, publisher only need to adhere to the “Core Web Vitals,” a new set of criteria that measures the page experience for both mobile and desktop. AMP was immediately stripped of its relevance. And Google, who for years lauded AMP as the only viable solution for mobile pages and for which it erected an entire department, started phasing out the project overnight. 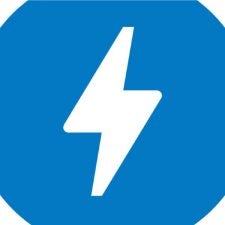 The AMP logo: a blue circle with a white lightning bolt

​​Soon after, a slew of digital publishers announced that they would be moving away from AMP that summer. The Washington Post started in the summer of 2021, then followed Twitter. Future plc, a British media company that publishes over 200 magazines, including Buzzfeed, The Verge and New York Magazine, also announced it would discontinue using AMP soon after.

In Germany, recipe site Chefkoch was among the first companies to stop using AMP six months ago. The company shut down nearly 600,000 AMP URLs, Chefkoch SEO manager Hanns Kronenberg wrote in a Linkedin post six months ago. His fears of a drop in visibility mentioned in his post turn out to be unfounded. After more than a month he posted an update, saying, that there have been “no negative developments regarding visibility.”

Tobias Willmann, who is responsible for SEO at Swiss news site Blick.ch, confirmed that they also discontinued using AMP roughly two months ago in the Seopresso podcast, while Johannes Nareyek from German tabloid Bild.de responded to OMR’s request for comment saying that Bild “began pivoting away from AMP a long time ago.”

A new standard on the horizon?

Publishers in DACH clearly seem to be moving away from AMP. However, not all of them are able, or willing, to pull the plug overnight. “These are long-standing processes, combined with website relaunches. It will take many years until publishers like BILD or Der Spiegel have completely switched off AMP,” Beus tells OMR. There are no exact details yet about the long-term effects of the switch away from AMP. One publisher familiar to OMR reported to us that ad revenue has been higher on AMP sites. However, others, such as Future plc, are reporting up to 30 percent more traffic since they stopped using AMP—hopes are for a corresponding spike in ad revenues as well.

There has been no official confirmation from Google yet that AMP will be phased out entirely. However, AMP’s chief developer, Malte Ubl, left the company three months ago. “Let’s just say I learned a lot from it,” he wrote on his personal blog the same day. SEO expert Johannes Beus feels that “Google has given up.” It seems to only be a matter of time until it is official. There may, however, already be a new standard Google will begin pushing, namely Stories a la Snapchat and Instagram. In February, the “Search Engine Journal,” for example, already took a look to the future in their article entitled “Are Web Stories the new AMP?”