The youth shall inherit the internet 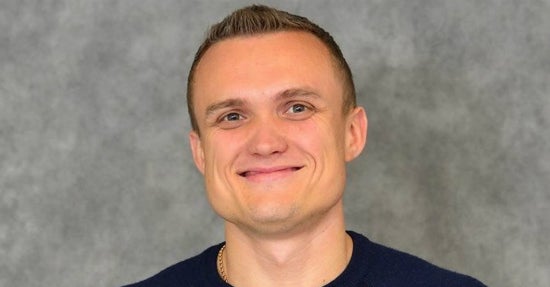 Sometime last week, OMR grand poobah and founder Philipp burst into the office. Short of breath and all sorts of wound up, Philipp lays out a hot scoop from OMR-family friend Andre Alpar. What’s the hubbub all about? A sponsored post published by US blogger Jeff Bullas: a classic strike-it-rich story of an initial €30 investment mushrooming into annual revenue of EUR 100 million. The protagonist? German Alexander Bachmann.

We know the name, but it’s been a while since we’ve heard it. When he was just 17, Bachmann founded what would become the largest popup ad network in Germany, BinLayer. But when publishers stop offering pop-up ads, business begins to flounder. So he jumps ship and founds his own affiliate network. The new venture, Admitad, is headquartered in Germany and is a massive success in Russia and India according to the company.

Being successful is one thing. Generating nearly EUR 200 million a year in revenue is another. Is Admitad really a hidden champion on such a massive scale? Did Alexander Bachmann really go from king of the pop-ups to affiliate magnate? Not having heard peep from him since BinLayer went belly up, we set about getting to the bottom of Admitad.

Drop out to hot shot

Bachmann is German, originally from the south of the country, near Heilbronn in Baden-Würtemberg, where he dropped out of school in 9th grade. At 17, he discovers affiliate marketing and launches his first business BinLayer. “Initially, my plan was to purchase ads on a CPM basis and then to convert them into CPOs,” Bachmann told OMR in a phone interview. From 2007 onwards, he purchases reach from publishers for mere pennies, which he then uses as ad space for the BinLayer pop-up and layer ads. The ads stem from affiliate programs, which charge by the CPO and thus spend loads of cash to get users to perform a specific action.

He enjoys some initial success from 2007 to about 2009, aka the pre-adblocker era. BinLayer employs roughly 18 people at company HQ in Heilbronn, and becomes the market leader in 2009 when its biggest competitor, LayerAds.de, files for bankruptcy. After two years in the red, they land in the black for the first time netting 300K in profit. At the time, speculation was ripe throughout the digital marketing sector on just how much more Bachmann earned above the official figures. Keep in mind, this was back at a time where it was completely unheard of for 18- year-old CEOs to roll up into important business appointments in a luxury sport car, clad in sweatpants and a hoodie.

With the invention of adblockers, Bachmann sees the writing on the wall that his business model was doomed. In 2009, he hires Sabrina Saleh as co-CEO, so that he can focus on his next project. Saleh, by the way, founded an affiliate network of her own in Digidip in 2013, which came in at ninth in a ranking of Germany’s fastest growing startups in 2016..

When Bachmann finally exits completely in 2010, BinLayer enters a slow, but inevitable downfall. The board changes yearlyuntil they officially file for bankruptcy in 2012. In 2013, QE GmbH, acquires what’s left of BinLayer and reboots the network. The domain is still online today, but shows no signs of activity since 2013.

Beginning in 2009, Bachmann begins focusing on an entirely different market, Russia. “I took a look at what was going on in Russia. Back then, hardly anyone had positioned an affiliate network. So, I did.” He relocates to the Munich area, settling on Unterhaching, where he starts building Admitad in 2009. By March of the next year, the beta is ready and he dives into the Russian market.”After six months or so and several attempts to get the business up and running in Russia from Germany, I made the decision to move to Moscow,” says Bachmann.

According to him, Admitad runs much more smoothly from the Motherland. While “the nominal HQ continues to be in Heilbronn, the real central office is actually located in Moscow and has been for a while.” Bachmann says Admitad employs some 270 people around the world with another 10 joining the company every month. There are 150 employees working from the massive 1750-sqm campus in Moscow, while there are also offices in Germany, Belarus, Ukraine, Switzerland, India and Turkey. Within the span of just a few months, Bachmann claims to have built up the largest affiliate network in the CIS (Commonwealth of Independent States) region. 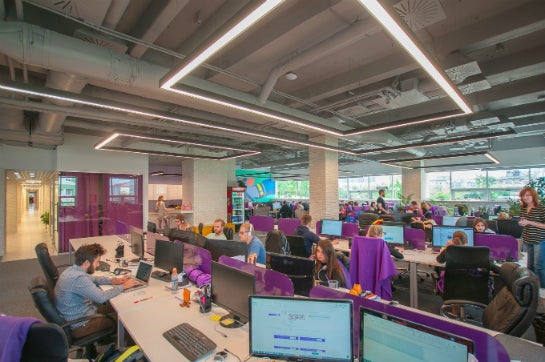 “Our network has 550,000 registered publishers. When you narrow that down to active publishers, i.e. those who have completed a transaction in the past month, we have 32,000,” says Bachmann. That list, he says, also includes many partners from Asia as well as well-known international entities like Ve Interactive, Cuponation, Savings United and the German version of Adgoal. Admitad is relatively transparent with the advertising situation in the network. On an public site, potential publishing partners can browse the 1,384 partner programs for suitable advertisers, which include eCommerce behemoths AliExpress, Booking, Asos, Lamoda (Zalando in Russia), Nike, Adidas and many more.

The advantage of proximity and a full-service approach

But how is Bachmann able to build such a massive affiliate network within just a few short years? “We are a full-service provider, performing tasks that in Germany are typically handled by an affiliate agency. Thus, advertisers are not confronted with any additional costs in step one. This enables Admitad to typically acquire a 30% commission from the partners, whereas in Germany that figure hovers around 20%. “Every one of our advertisers is assigned a key account manager,” Bachmann says. “At present, we have 65 staff members dedicated to just that, while an additional 70 take care of expanding and supporting the publishing network.” The only reason Admitad is able to maintain such staff figures is thanks to the Moscow location and the relatively weak Ruble. 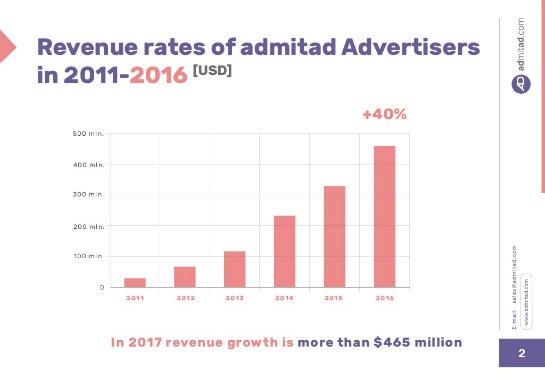 “In Germany, an account manager would cost me EUR 3500 a month. For that same amount, I can employ three of them in Moscow, all of whom speak English,” says Bachmann. Outsourcing to Moscow thus enables Admitad to hire more personnel to acquire new publishers, who are then provided support on how to cleverly implement their affiliate strategy—which in turn aids advertisers. The actual implementation of the affiliate program relies on more standard practices, and Bachmann says his company primarily makes its money through affiliate links, mostly on coupon sites. Advertisers prefer paying publishers on a CPA basis (cost per action), where the most common action is in fact a purchase. “In 2016, eCommerce revenue in Russia totaled 920 billion rubles (approx. EU 12.6 billion). “Admitad is responsible for about 3.03% of that,” claims Bachmann.

However, Bachmann emphasizes that Admitad is also currently working on technical solutions for typical affiliate problems. “For example, my company has developed a technology that blocks so-called “cookie stuffing” and “cookie dropping.” This type of fraud surreptitiously attaches an affiliate cookie to users, which fires anytime they make a purchase on a corresponding advertiser site. The affiliate, who placed the cookie, receives the commission, despite the fact that those users never reached the purchase page through the ad. It’s worth pointing out that other major affiliate networks also offer such tools, e.g. Awin (formerly Zanox).

During his BinLayer days in Germany, it was a well-known fact that many of the transactions he was connected to were sketchy, where many providers aggressively exploited loopholes in know-how and tracking technologies. Does this mean that the Russian market has policed and cleaned itself up? That does not seem to be the case if bwhere publishers vent their frustration about not receiving payment and a slew of fake clicks is to be believed, our understanding of which is admittedly based on a suspect result from Google Translate.

Could the figures check out?

So what about this revenue of USD 50 million in 2016? And the targeted growth of 252% in 2017, aka revenue of USD 180 million? First off, revenue in affiliate networks does not always indicate a company’s revenue. Oftentimes, these figures include total revenue generated by the network, which includes revenue paid to publishers. Looking at official statistics provided by the Bundesanzeiger (engl. Federal Gazette), Admitad seems to be quite far off from achieving such figures in 2015. At the same time it must be said that the figures Admitad did provide are the absolute minimum required in a balance sheet. Accordingly, what we do know is that total assets increased from EUR 475,000 to just over a million from 2014 to 2015, while expenses only marginally increased from EUR 191,000 to 262,000. There is, however, nothing in the financials indicating 9-figure revenues.

If it does turn out to be true that Admitad has an 80% market share for affiliate networks in the GIS states and exclusive agreements with 140 advertisers, like Groupon Russia (Frendi), Mothercare, Asos, Adidas RU, Foodpanda IN, Otto RU, Reebok and others, then business figures to be very good. Then there are also the not-so-small matters of being the market leader in the world’s 6th largest market and having recently landed its first big deals in Europe. One thing that is for certain, however, is that international markets are in very different stages when it comes to tracking, fraud prevention and know-how capabilities. Therefore, it would seem that Bachmann’s years of experience from well-developed markets at very least couldn’t hurt.