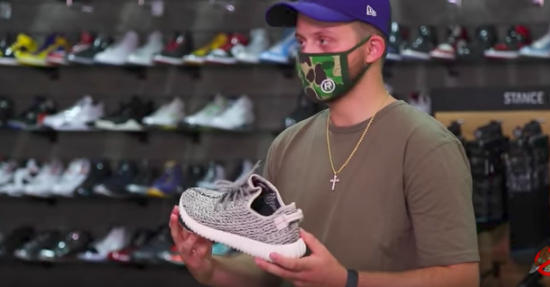 The sneaker hype online shows no signs of slowing. Models like “Yeezy” by Adidas and Kanye West and their absolute limited supply give rise to an incredible amount of hype—and to counterfeits. A 19-year-old med student from LA has decided to take up the fight against fakes. On his Instagram account, he not only takes celebs to task for wearing knock-offs, but also helps out regular dudes and dudettes with an authenticity check—and apparently makes bank.

“The way I started is because my dad had bought me a pair of fake Yeezys for my birthday,” says the self-styled Yeezy Busta in a talk with Vice. The LA med-student, whose real name he says only about 5 people really know, did everything he could to track down a real pair of the kicks. After he dropped a grand on the shoes and saw just how many teenagers were strutting around his high school with fake Yeezys, he had had enough. “I worked hard to get them, and these guys paid 80 to 100 dollars for a pair but were getting the same gratification from other people.”

Leaning heavily on Instagram account “fakewatchbusta,” which, as the name suggests, keeps an eye out for fake luxury watches and has some 370,000 subscribers, Yeezy Busta launches his eponymous account in 2015. And today, it’s bigger than the original; after just a year it has 600,000 followers on Instagram, 17,500 on Twitter and 30,000 subscribers on Youtube. On top of that there have been numerous features by major publishers like Vice, The Outline and complex.com.

10K shelling out 10 bucks for an authenticity check?

Yeezy Busta has not just gained fame among sneaker heads by explaining the mini details that give away a fake. But also because he busts celebs, athletes and other influencers. That list includes UFC fighter Cody Garbrandt, Youtuber Lance Stewart and British model Demi Rose.

By now, Yeezy Busta is a real pro in recognizing whack sneakers. “At this point, I can look at a pair of shoes and tell if they’re real or fake in five seconds,” he told Vice. This skill, combined with a massive reach among sneaker heads, appears to have given rise to a lucrative business. On his homepage, “Yeezy Busta Legit Check,” you can get an authenticity check within 24 hours for your pair of sneakers for 10 bucks. The only requirement is that you send 6 pics of shoes and the box, ideally from several perspectives.

“I’ve never been wrong and I don’t want to lose my credibility”, boasts “Yeezy Busta” about his services. A look at the stats from the Google Shortener links that he uses to redirect to the landing page, sheds some light on the interests of his followers. One link from last May has been clicked some 67,000 times, although he swaps out the links on occasion. Just today (at the time of publishing) we saw that he had posted a new link in the Instagram description block, which has thus far only generated 100 clicks.

It purely speculative to say whether or not a relevant amount of link-clickers end up paying for a sneaker check. A simple, yet plausible calculation, however, says that business is already pretty lucrative. If somewhere around 5% of the 67,000 users that clicked the link are converted into buyers, then “Yeezy Busta” would have already notched over 33K in just over 3 months. Not bad for a student and a business model that’s only been on the market for a quarter. The absurdity really starts to take flight when you calculate his theoretical hourly wage. If he really only needs 5 seconds to complete a 10-buck fake check, then he makes about USD 7200 an hour.

In the end, “Yeezy Busta” is more than a successful Instagram account with a fake check. He is yet another example of just how big the sneaker market is. In 2015, resellers in the USA alone are said to have generated USD 1 billion just through sneaker re-sales, especially through the use of bots, which automatically resell extremely rare models. The niche has long since developed its own ecosystem that creates big players frequently, as this article (in German) about Asphaltgold, a sneaker shop in Darmstadt, that successfully uses Instagram ads points out. It’s crazy what clever marketing and artificially created shortages can do…