Next article:Seventh heaven: the story of how Gymshark bulked up to a billion-dollar DTC fitness brand
Roland Eisenbrand & Scott Peterson

Here's how the ploy to manipulate the Amazon rankings works

300 billion dollars. That’s how much Amazon is estimated to have generated in sales last year. With such dizzying sales numbers, it’s hardly a surprise that competition among merchants jockeying to get their cut is fierce—and many are willing to resort to unclean means to get an edge. The newest ploy to manipulate Amazon: product “giveaways” as a means of receiving a coveted “bestseller badge.” Today, OMR is breaking down the trick and bringing examples.

If you head to Amazon to search for a product—which many do; according to PwC over half of all product searches in the US and our home market of Germany begin on Bezos’ behemoth—the sheer number of products on offer is staggering. Which of the hundreds or thousands of products listed is the one for me? One of the beloved methods among consumers for paring down the selection is to take a look at the bestsellers in each product category. Thousands of Amazon customers cannot have been wrong.

The social proof is in the badge

Amazon introduced the best-seller rank as a means of indicating how often a certain product has been sold compared to competitors in the same category. The top-selling product is listed as number 1. The second most-purchased product is number 2 and so on. There are two ways of finding the best-selling products in a category on Amazon. First, there is a menu option on the home page, prominently displayed next to “All” at the top of the page, which is then further broken down into specific product categories and subcategories. for example, if you are looking for a hair dryer, but you don’t know which model or brand you want, you can click “Best Sellers,” then “Beauty,” “Hair Care,” “Styling Tools,” “Hair Dryers and accessories” and finally “Hair Dryers.”

The other means of promoting best sellers on the platform is to appear in the search results as “Best Seller” and adding “Best Seller No. 1” to the product description page. This very visible social proof not only presents the product in a very convincing light, but also figures to lead to a significant uptick in sales.

The #1 Best Seller badge as seen on an Amazon product description page. (Screenshot of Amazon.de by OMR)

“It can create a significant sales push”

The best-seller badge is a very coveted item for Amazon merchants. “The best-seller badge can have a significant impact on sales,” Hannes Detjen, co-founder of Amazon agency Remazing, told OMR. “Just how big the uplift is, depends on the specific product and the respective category.”

Regarding a possible boost in visibility for merchants from the badge, Detjen sees more of an indirect impact. “The products that receive the badge are already those that are purchased most frequently in a given category. Ranking high in the search results is dependent on other factors, including which search term is used. That being said, products which are already generating frequent sales, the badge does make it easier to further increase visibility in the search results.”

“I decided to dig deeper”

Crafty merchants on the US Amazon marketplace have figured out a way to get the badge without actually earning it:

One of the first people to find out about the ploy was Amazon merchant Paulius Kvedaras. “I noticed one of the products like this in the category I sell and decided to dig deeper,” Kvedaras told OMR in a chat on Facebook Messenger. “It’s insane to achieve best-seller status so quickly.” Originally from Lithuania, Kvedaras sells sports articles on the US and German Amazon marketplaces, including compression bandages and socks, masks, etc. 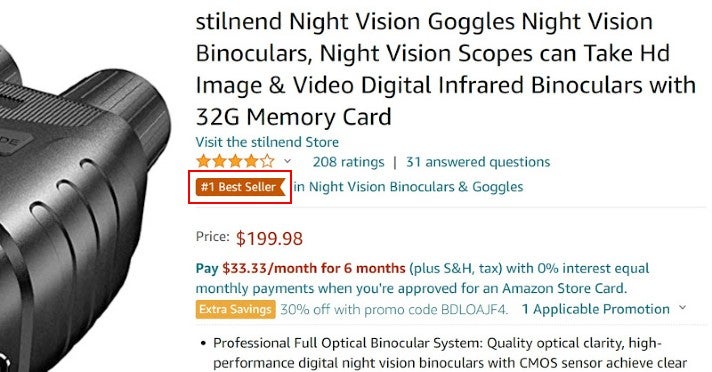 Kvedaras took the screenshot above to document the find, which apparently comes from a Chinese merchant on Amazon US for night vision goggles. In April and May of this year, the listing repeatedly yo-yo’d in the “Sports & Outdoor” subcategory from a spot somewhere between 15,000 and 20,000 (i.e. very rarely sold ) to the Top-10. In the “Night Vision Binoculars & Googles” category, the listing even reached the top spot, which earned it the best-seller badge.

This graphic from Amazon analytics tool Keepa shows that the night vision goggles repeatedly shot up the rankings and then fell. It appears that every time the listing dropped in the rankings, the merchant ran another “give away” to push it to the top (screenshot: Paulius Kvedaras)

During this time, the product price remained steady, meaning that there was no special offer that helped push the listing to the top. Furthermore, the product only has a fraction of the reviews that the “Best Seller” in the category has. So how can the massive swings in the rankings and the best-seller badge be explained otherwise?

Product “give away” growth hack

The answer is coupons posted in Facebook groups. FOMO in the form of “FREEEEEEE! RUNNNN FAST!!!!” headlined this now-deleted post with two discount codes that gave group members the chance to acquire the night vision goggles on Amazon for free. According to Kvedaras, the post had over 400 comments from users saying that they “got ’em!”

Posts like these on Facebook helped vault the product listing to the top of the Amazon rankings (screenshot: Paulius Kvedaras)

What stands out about the post is that the poster specifically mentions “change seller” on the Amazon marketplace, a reference to selecting the seller of a product in the Amazon buy box, as a requirement to getting the free goggles. The reason for that is protection. The original merchant set up a second merchant account on which it offers the product on Amazon. Both Amazon accounts offer inventory for the same product listing with each product on Amazon given an “Amazon Standard Identification Number.” With the ASIN, the respective product can be offered by more than one merchant.

If one of the accounts resorts to illicit means to push the product listing, the seller could have their account suspended—but the listing usually remains active. Thus, the second account mitigates the risk. And should the burner account be suspended, there is no real damage done to the original seller.

Kvedaras ordered the night vision goggles, only to receive a message the very same day that his order had been canceled. And given that the ploy seems to have born fruit for the night vision goggle merchant, it seems that Amazon counts such free “sales,” even those that are later cancelled in its best-seller ranking. The method, however, might work a little too well. People are beginning to see through the tactic with a consumer protection website and a handful of online users sounding the alarm bells about the “free” Amazon products.

Brand new or tried and true?

The products that Kvedaras first noticed and dove deep on have since been deleted from Amazon, as has the corresponding post on Facebook. While investigating the night vision goggles, Kvedaras discovered a host of additional suspicious-looking product listings banging the “free-product” drum in various Facebook groups, which were still active at the time of publishing. Furthermore, there are active posts on Twitter and a fishy-looking coupon site with deals too good to be true.

“Several of the accounts that I have outed have been banned, while others are still selling, but have stopped with the coupons,” Kvedaras says. Still, he says that by using Keepa it’s relatively easy to find other, still active examples of merchants on the Amazons best-seller list who use the method and post coupons to Facebook Groups. Just last week, he noticed this inflatable couch on Amazon after it had reached the top sport in “Sports & Outdoor.” The product is no longer available. 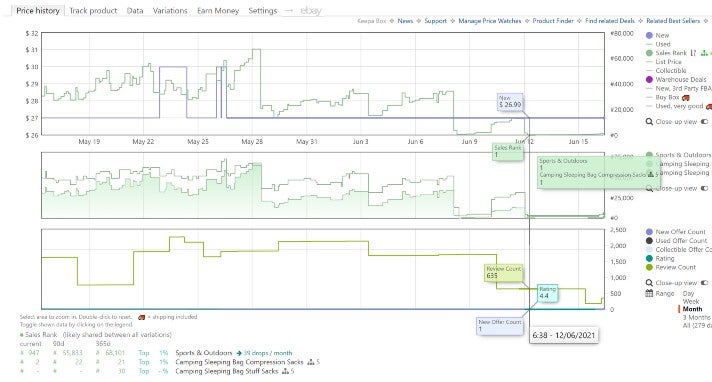 Industry trade website Eretailerpro published and credited Kvedaras findings; and there is also a Google Doc of the article by an unknown author making the rounds in Whatapp groups and on Linkedin. Another indication that Kvedaras’ discoveries are not isolated incidences, but rather a relatively widespread ploy that other merchants use is that other users independent of Kvedaras have reported on the hack—both in closed Amazon groups and even by Amazon in the official seller forum, e.g. last February and just last May.

“The evidence indicates that this method was only first employed a few months ago, but has steadily spread,” says Remazing co-founder Hannes Detjen. “But my personal impression is that it is a relatively small phenomena.” Detjen also sees the method’s days as numbered. “Once it has reached a certain threshold, Amazon will more closely monitor and crack down on the ploy.”

Thank you to Maik Busch, whose Linkedin post first called our attention to the topic.

Further reading on this topic
Talk of the town
Guest Contributor26.8.2021